One of the things that we decided on this year is to experience at least one new thing in our state weekly. That would mean 52 things if we weren’t traveling. However, in just a little over 2 weeks we will be experiencing new things in London, England. Last week I decided to take a look at what our now adopted state and hometown had to offer, so I visited the Colorado Springs visitors website. What was there really surprised me. I can’t believe that I’ve been in Colorado Springs for 4 years and I had no idea that so many of these things were available for me to do. Quite a few of them were free as well. It was almost lunchtime when I decided to search, and one thing really stood out. The Airplane Restaurant right here in Colorado Springs. Now what also surprised me was that this place was less than 10 minutes away from my house. 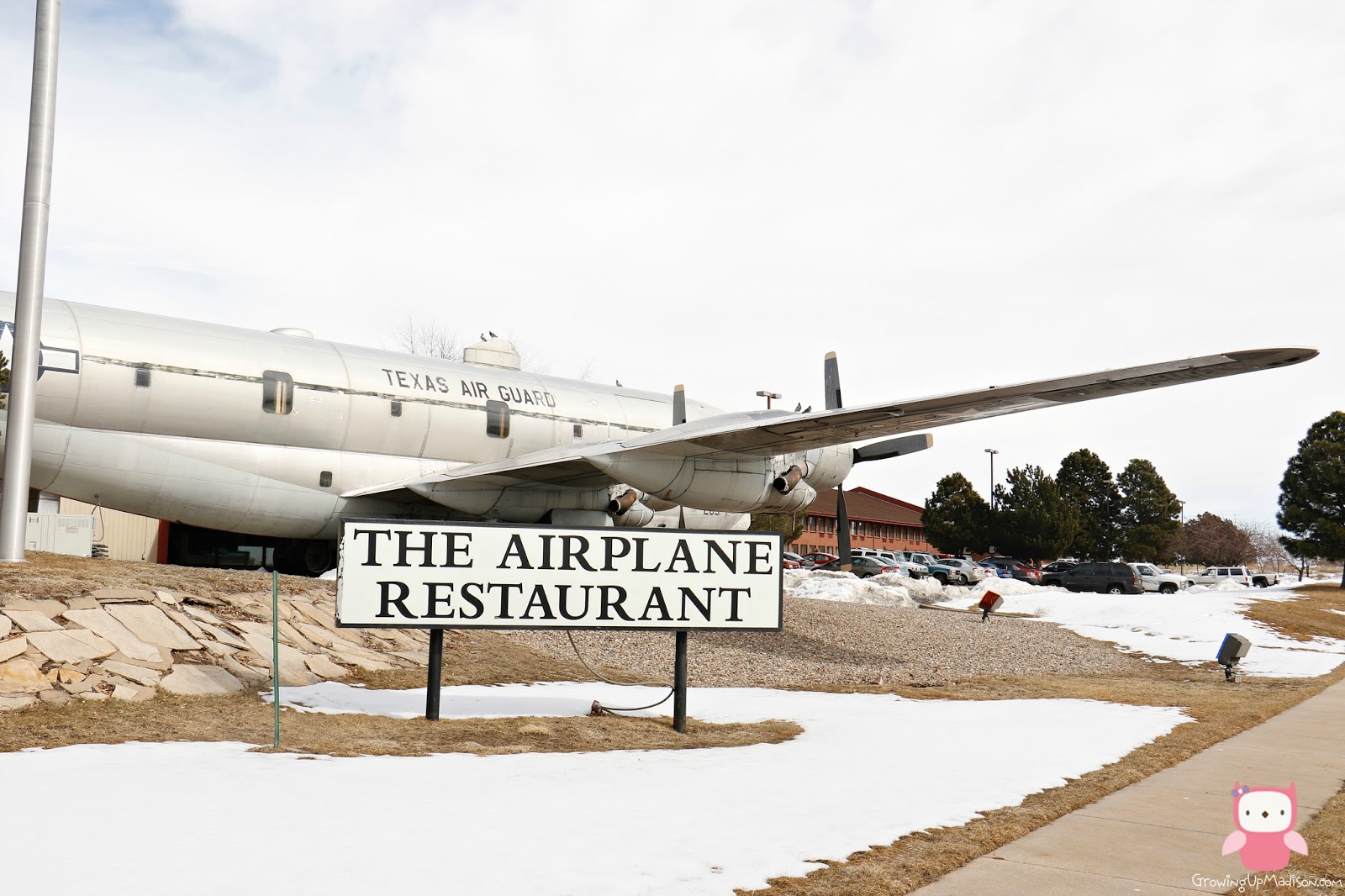 Madison just LOVES flying. She’s been flying, making international flights since she was 4 months old, but this was one flight that she was going to enjoy that was stationary. We could enjoy a meal on a plane without actually paying for an airline ticket. How often can one do that? This was indeed a treat that anyone who loves planes would love to do, and we both like to fly, so we just had to do it. We got dressed and headed to the restaurant. 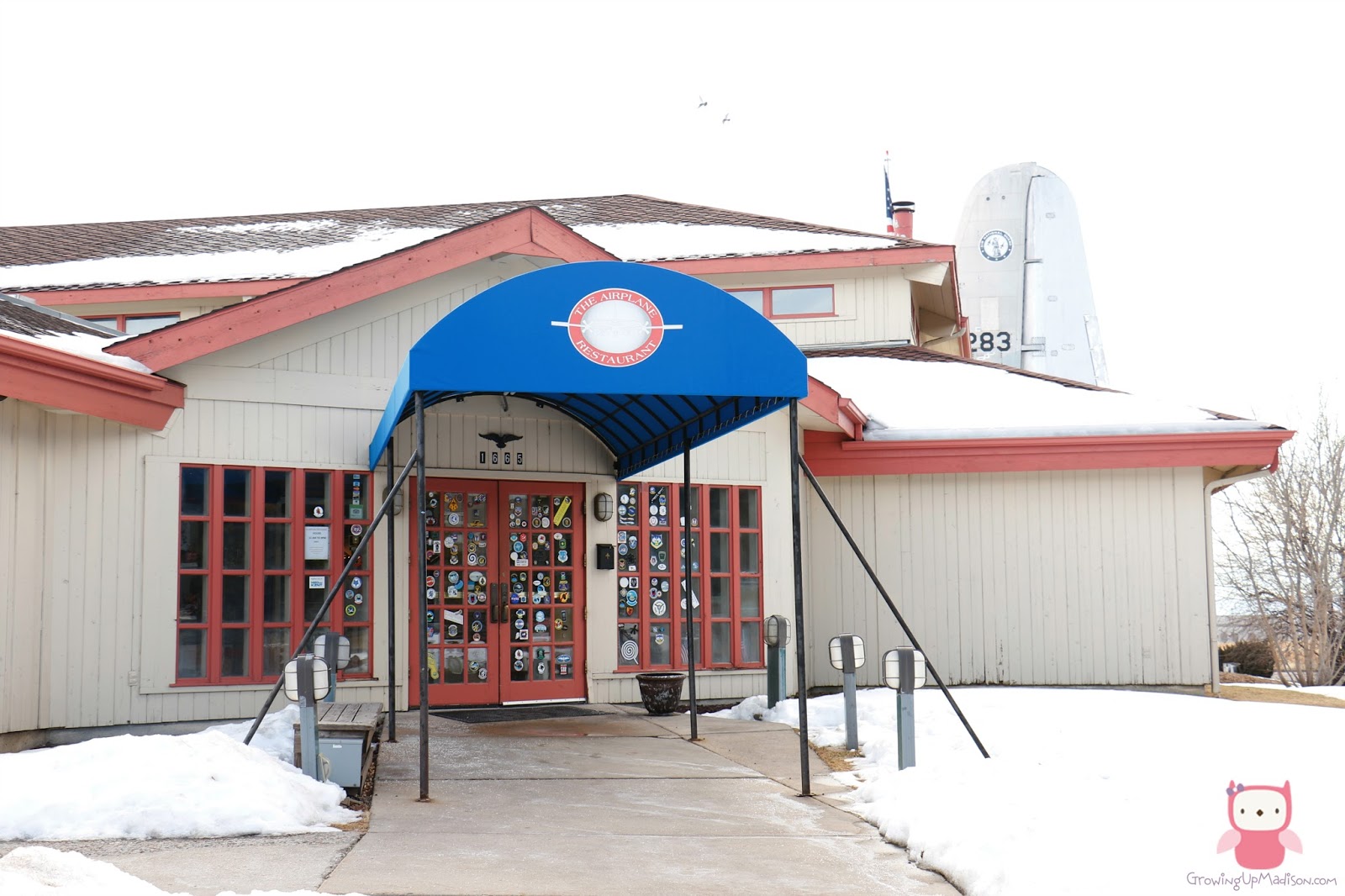 Now before I headed there, I paid a visit to their website to find out a little bit more about The Airplane Restaurant.  I found out that they served American cuisine but I also found out this, and I quote:

“The Airplane Restaurant centerpiece is a fully intact Boeing KC-97 tanker. Built in 1953, this magnificent airplane refueled aircraft throughout the world. Then, in May 2002, it began its second mission~ to be the preeminent aviation restaurant in the United States. Forty-two passengers can actually eat in the plane of the 275-seat restaurant. Rich in aviation history, displaying 100’s of pictures, memorabilia and rare artifacts, Solo’s offers much more than great food, it offers a flight through aviation history.” 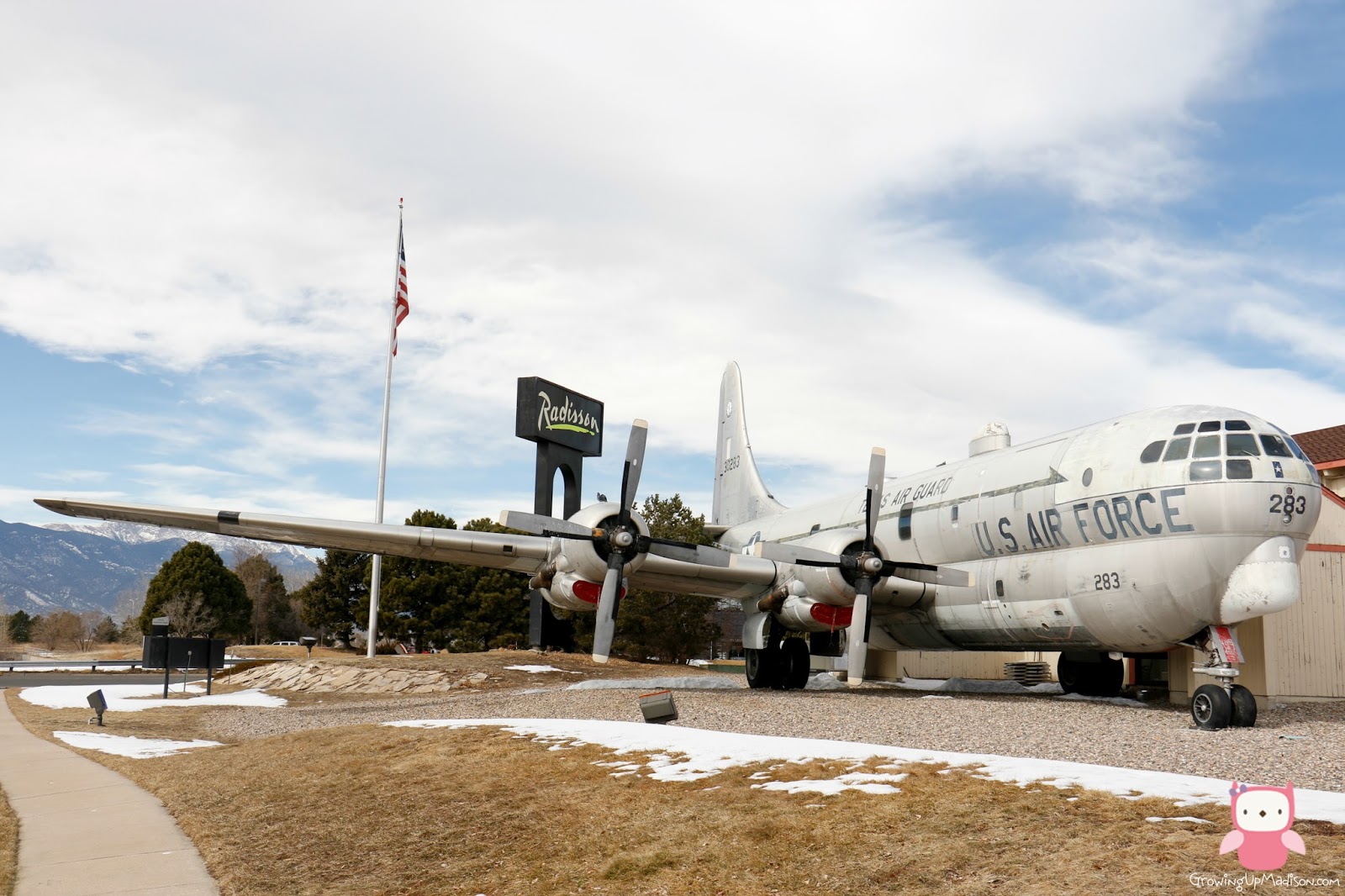 There is convenient parking in front of the restaurant, and we made our way inside. We were greeted by a “flight attendant” who showed us to our table. I was, however, able to take a few pictures of the inside that I want to share with you. They weren’t kidding when they said that there are hundreds of photos and artifacts awaiting you. It was like walking into an airline museum, but you knew that you were going to be served some fantastic food. 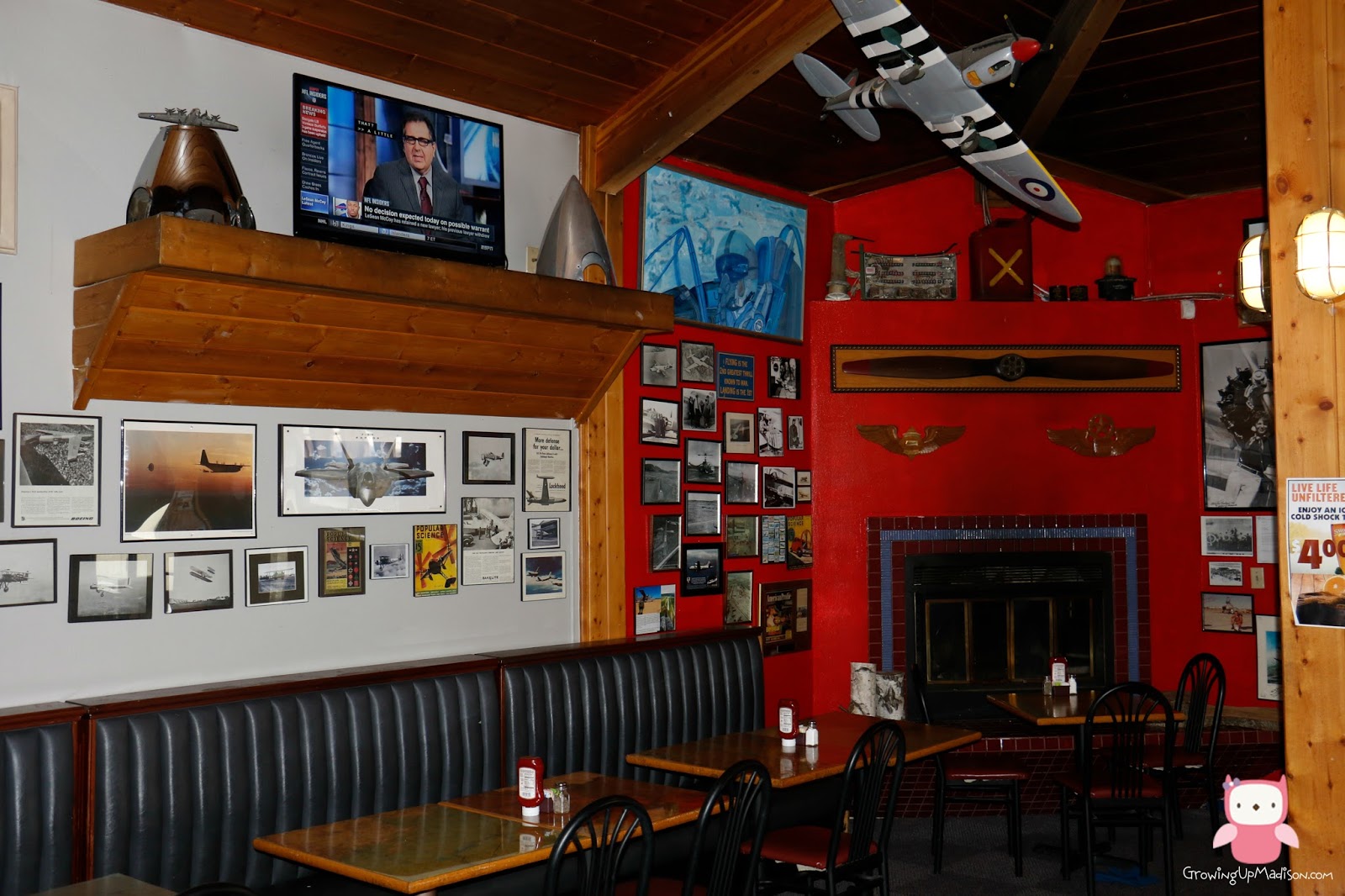 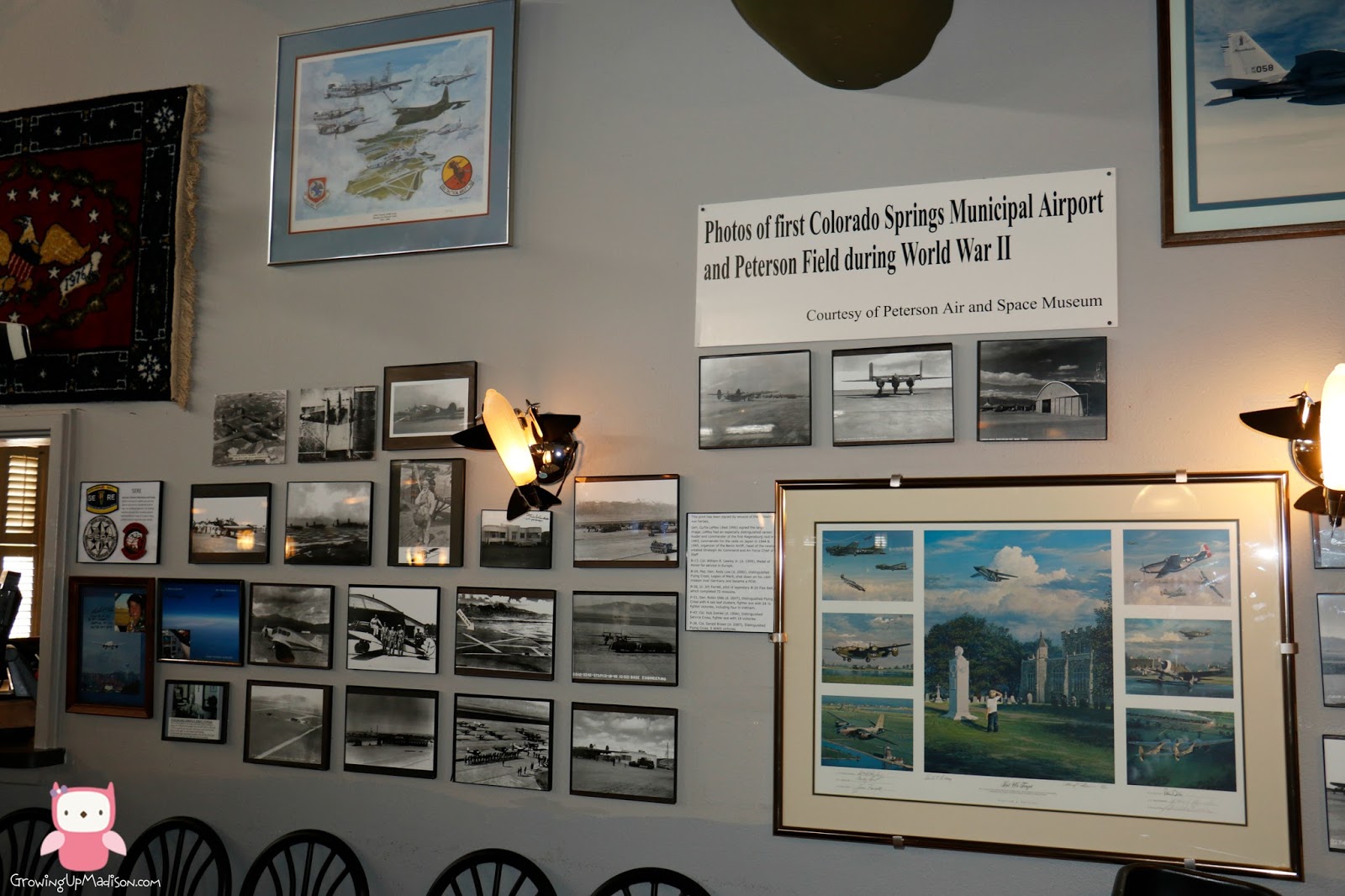 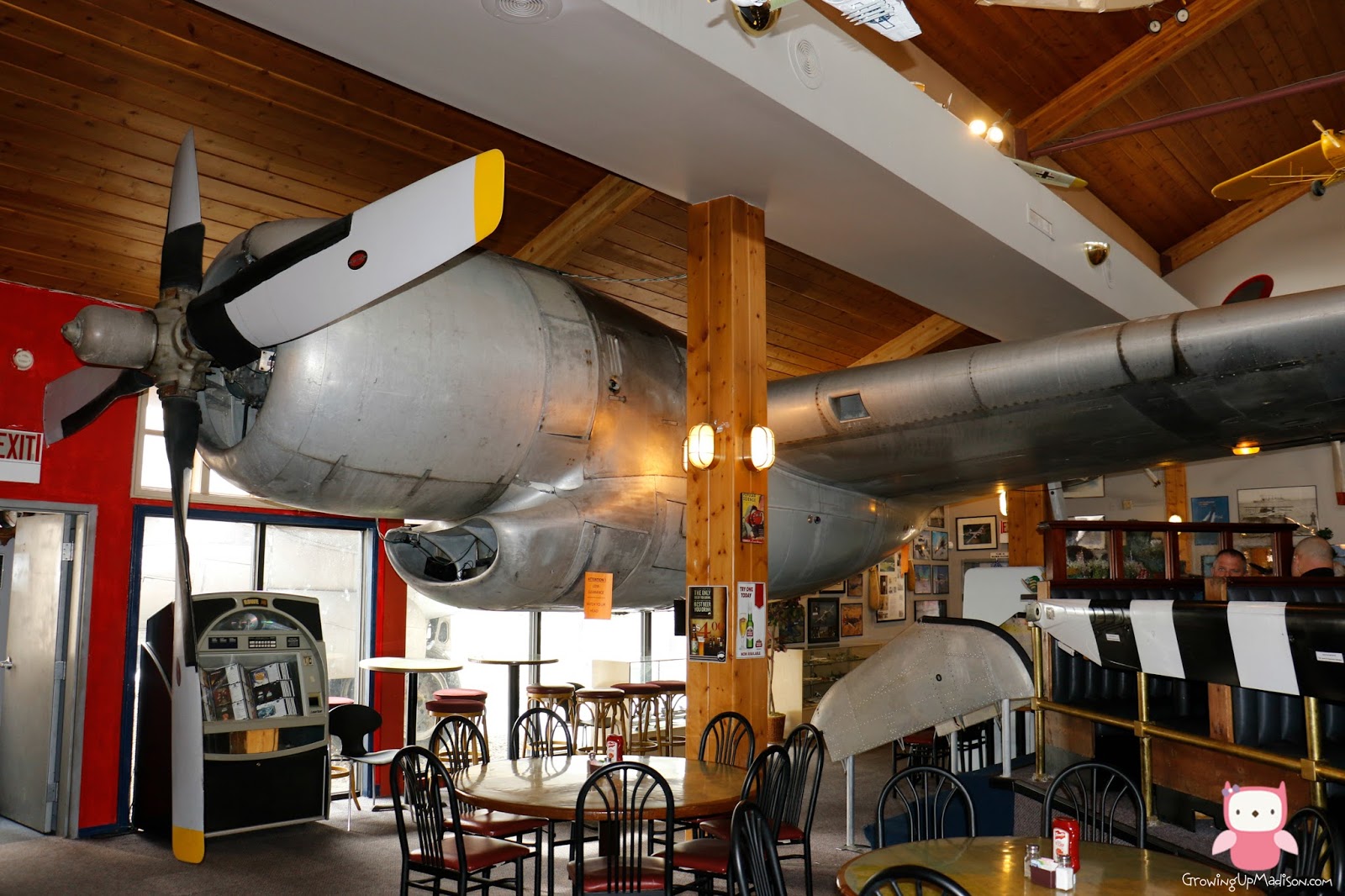 Now while you have the choice of eating in the restaurant building, you also have the option of eating on the plane. Since that’s what we came to do that’s what we did. Why eat in the building when you can do that at any time? How often can you eat on a plane? Not very often. Our flight attendant guided us to our seats, and we decided to get a “window” seat. It’s usually what I request when flying as well. Our tables I noticed was maps, and we were given menus that were printed and looked like newspapers. I mentioned that The Airplane Restaurant serves American cuisine and what’s more American than a good ole burger. Besides, it was lunchtime. I ordered a Guacamole Burger but was very tempted to order the Buffalo Burger since I’d never had Buffalo before, but didn’t want to risk ending up not liking it. Madison also decided on a cheeseburger from the kid’s menu and a bowl of fruit. All burgers come complete with fries. We also ordered some old-fashioned raspberry tea. 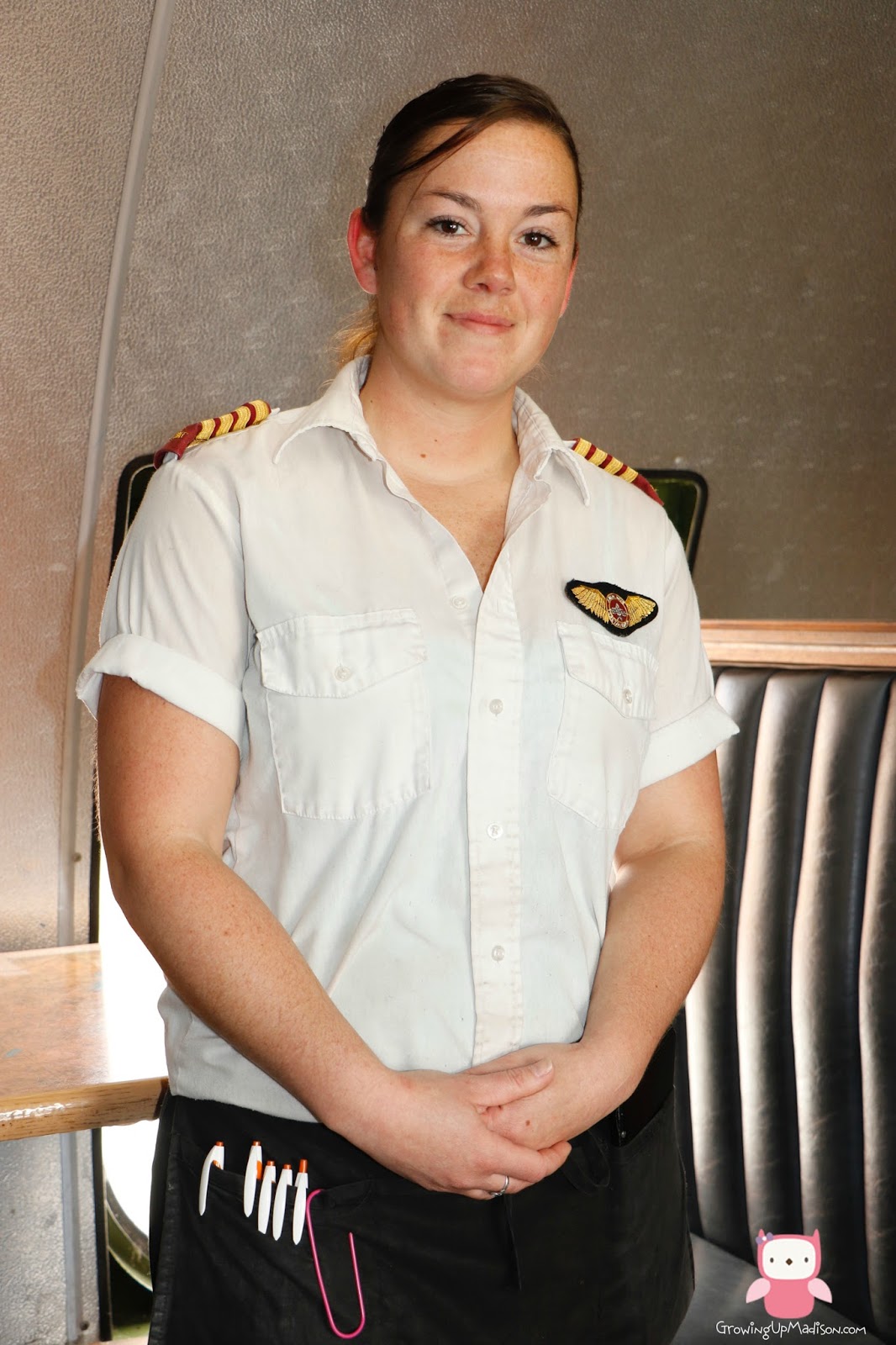 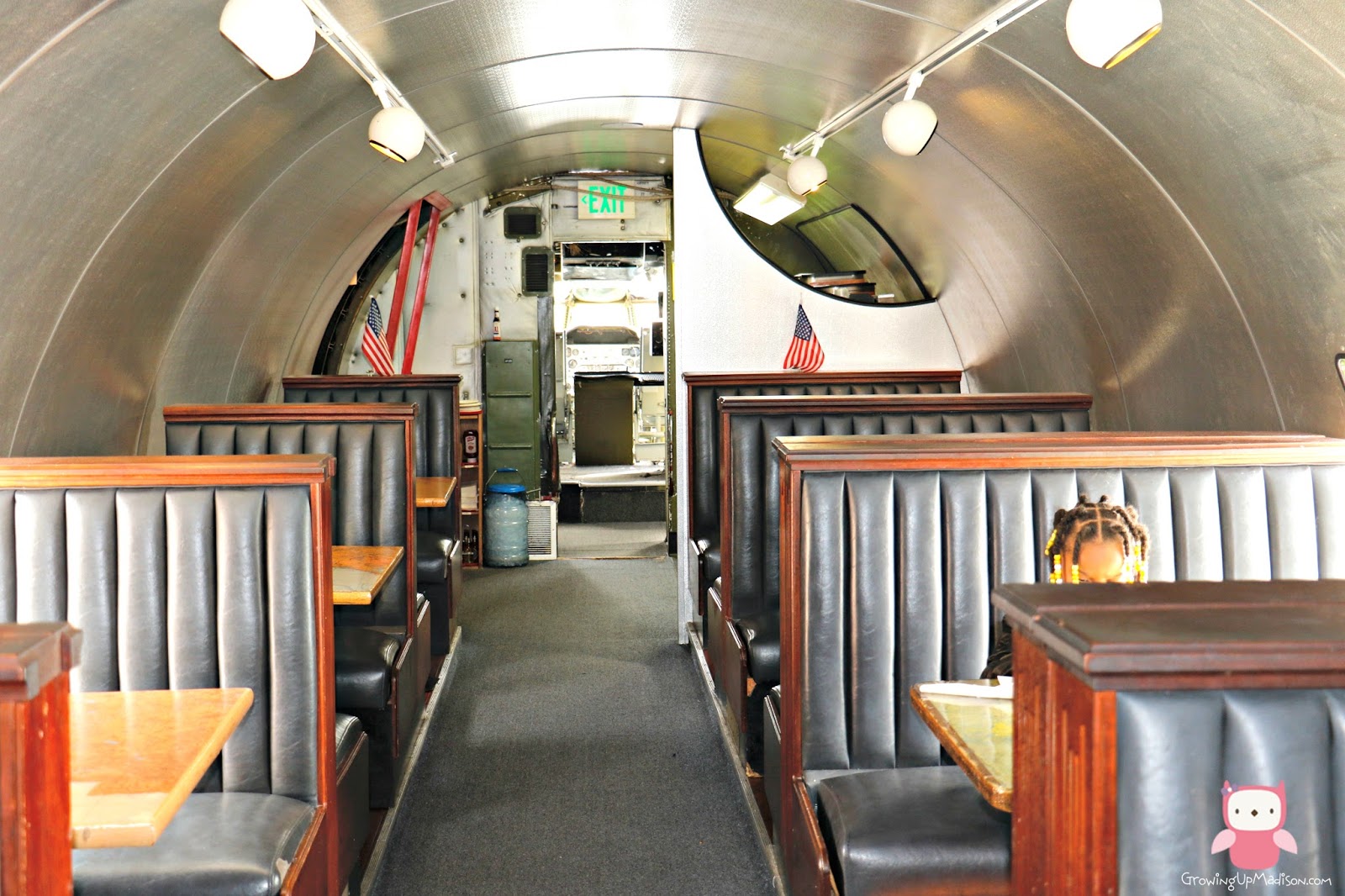 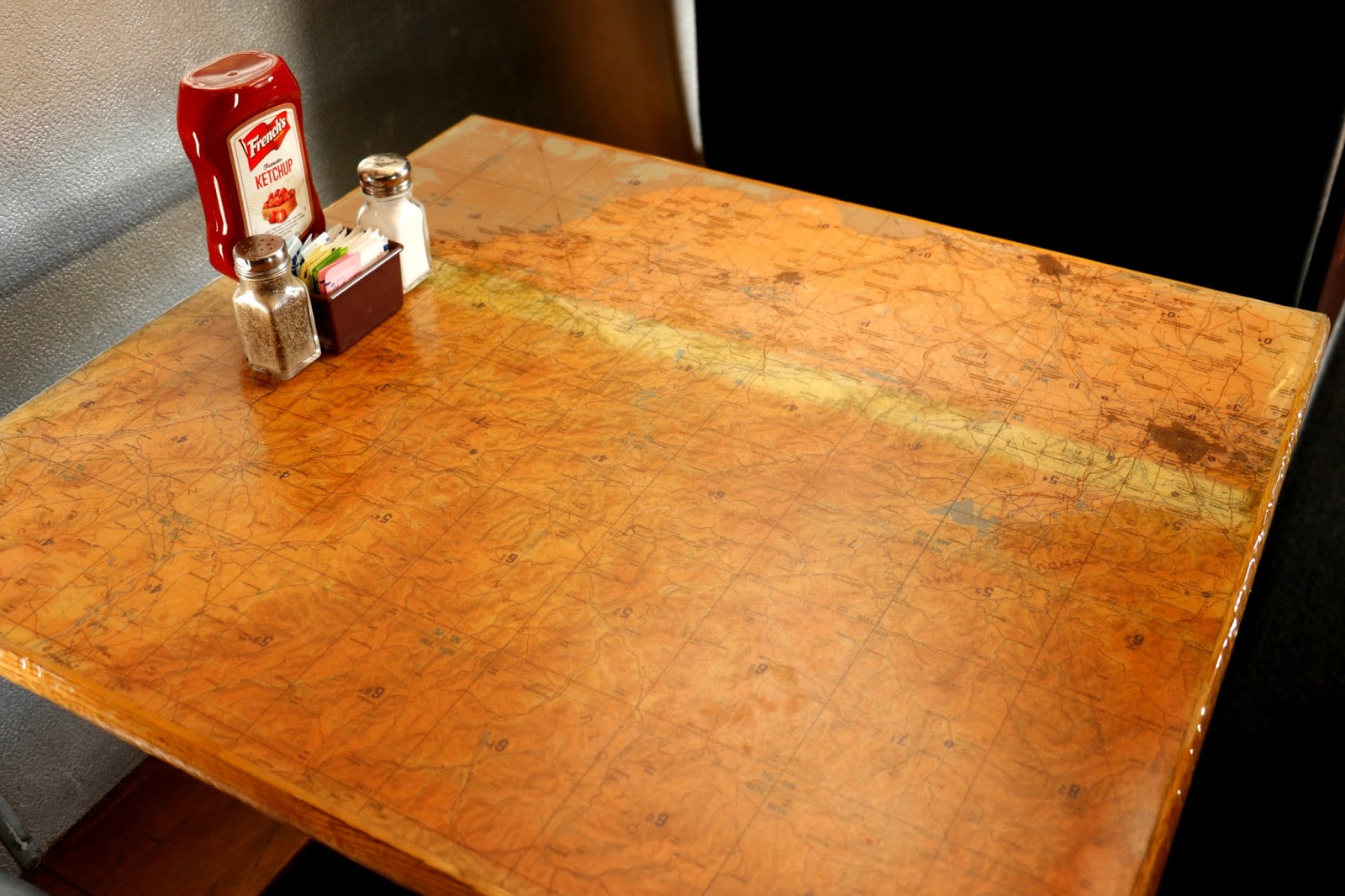 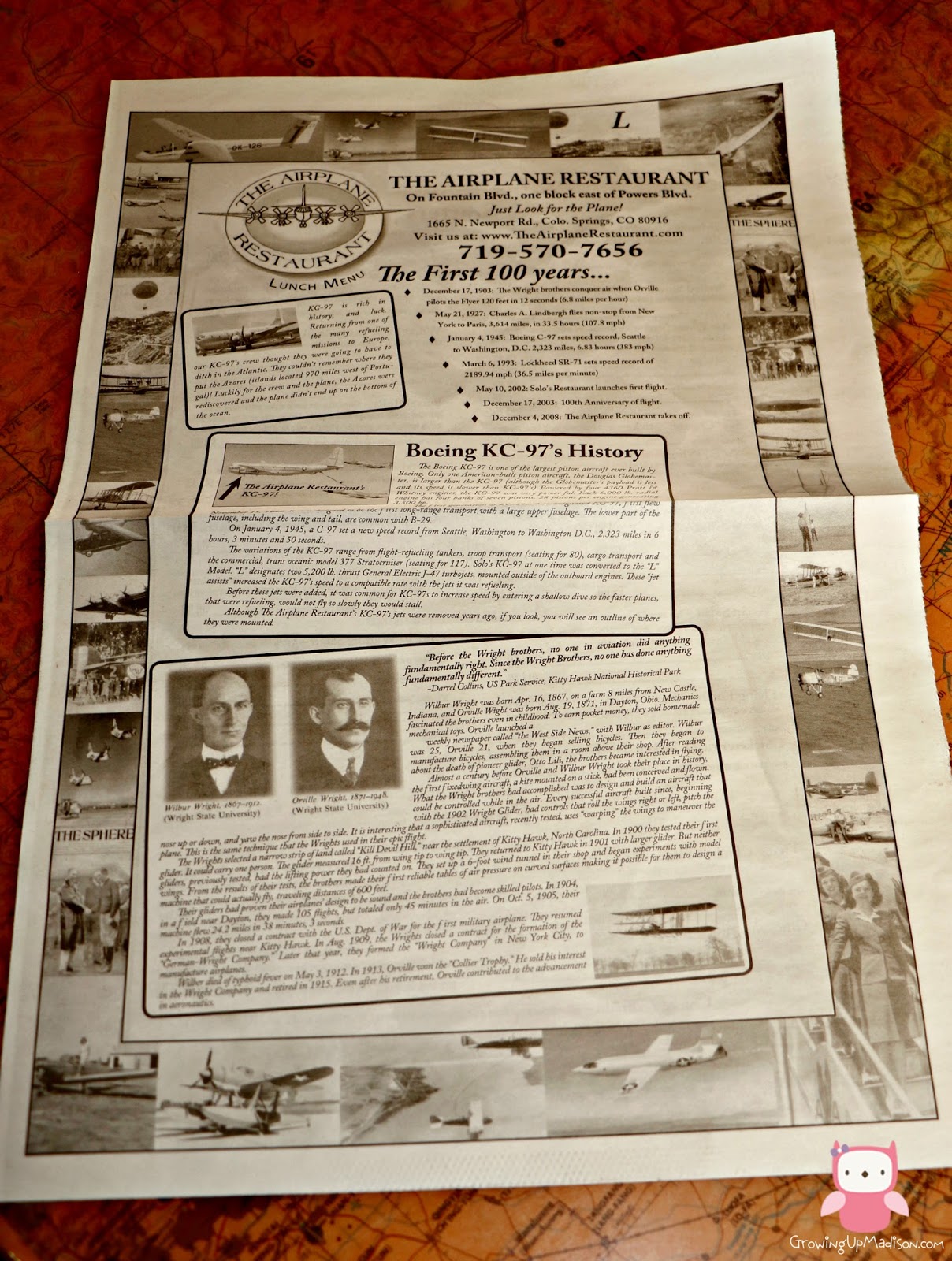 We placed our order, and while we waited for our food to arrive, we were told that we could take a look around and even head to the cockpit. This was a dream come true. It’s not often we’re allowed in the pilot’s cabin. Madison was able to pay a visit with the pilot’s on our flight to NYC this January, so she was once again excited to go. If you’re interested in the menu, both the lunch and dinner menu are available on their website. 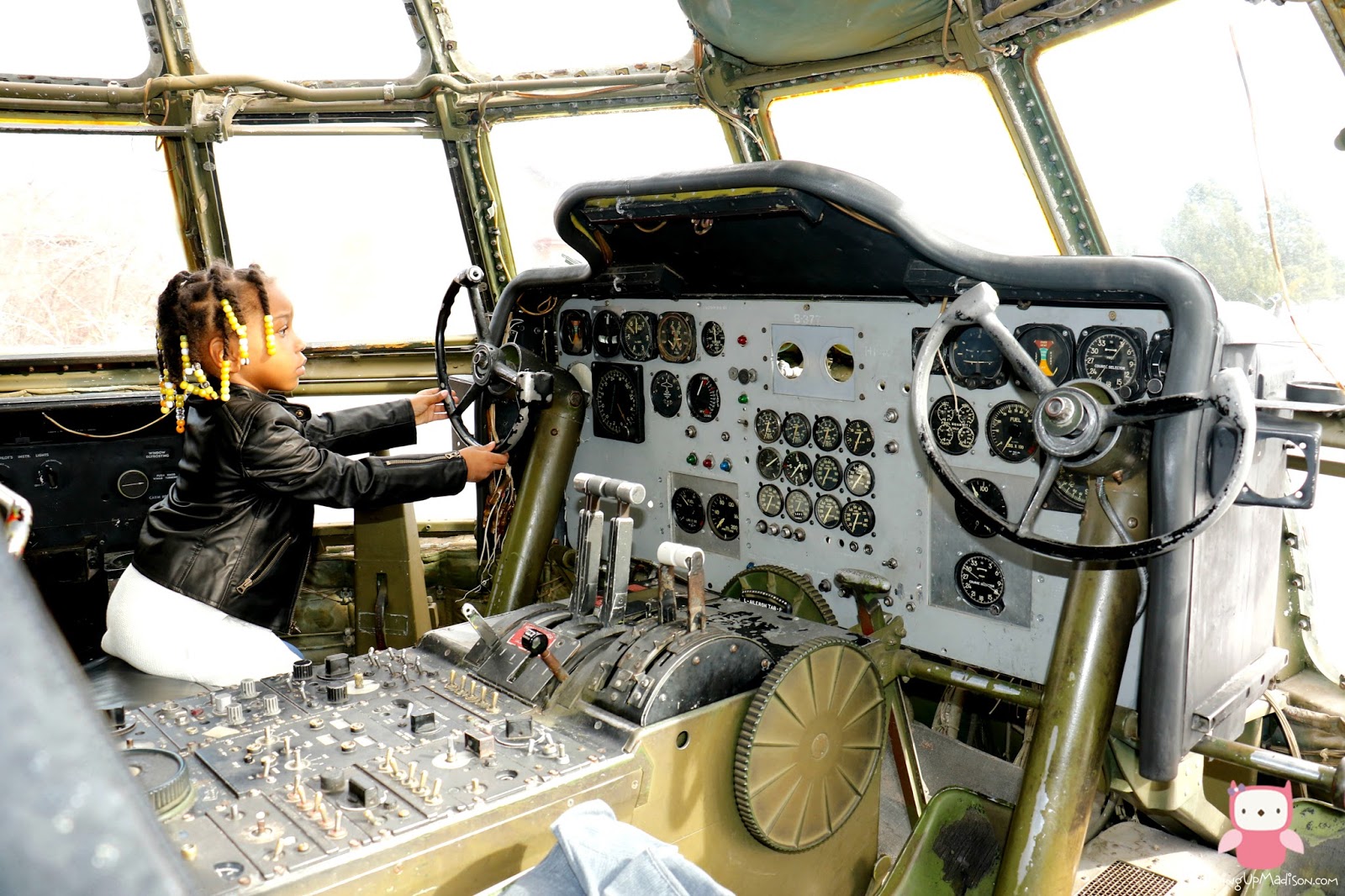 Our food arrived, and I have to say that I was impressed with our burgers. These aren’t your ordinary run of the mill burgers. These burgers were humongous. While I expected a small cheeseburger from the kid’s menu, they truly exceeded my expectation. The only complaint and what I wasn’t too impressed with was Madison’s fruit bowl. I expected fresh in-season fruits, what we got instead was fruit from a can in syrup. Madison loved it, but I wasn’t too happy since I’m not a fan of canned foods. Here’s a suggestion for the owners if they’re reading this. Buy fruits that are in season and cut them up and serve them to the kids instead. *hint* 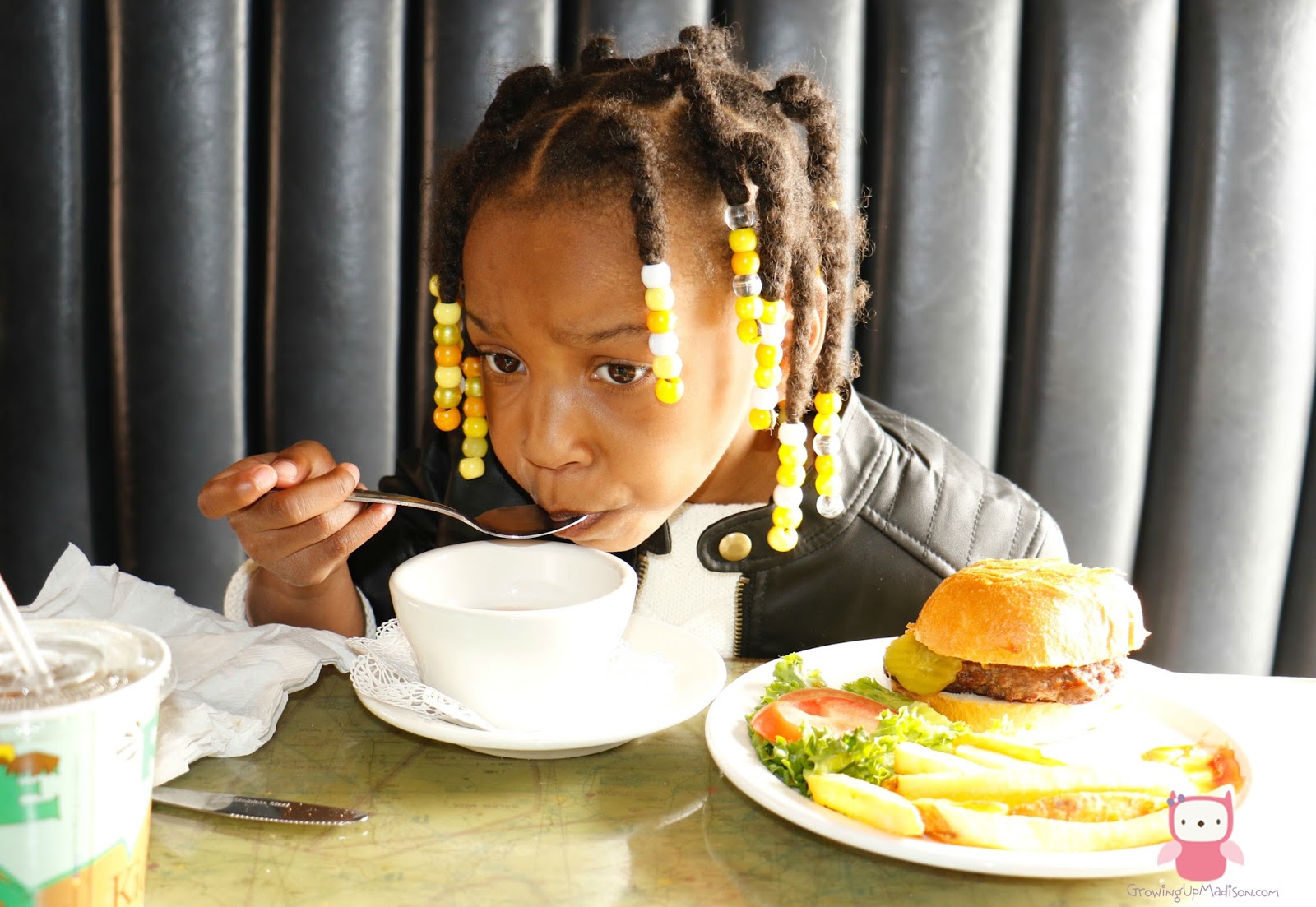 All in all, this was a fantastic experience, and I hope to go back once again. Maybe this time for dinner. So what are our thoughts on the Airplane Restaurant?

Food:  A- (wasn’t impressed by their fruit bowl)

They totally get an A+ in our books, and we would highly recommend them to anyone visiting the Colorado Springs area. 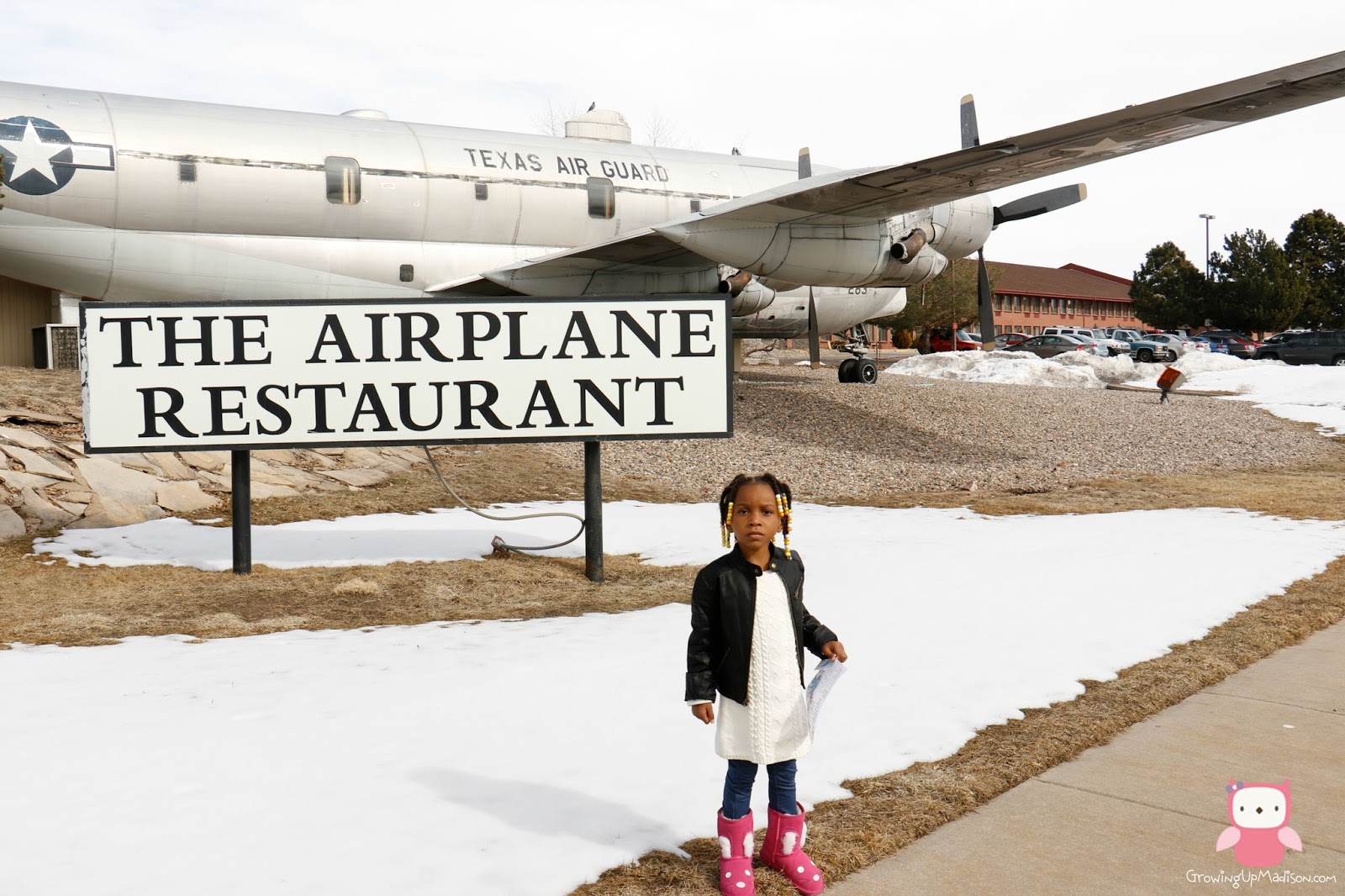 Here is the location and hours of operation of The Airplane Restaurant if you’re ever in the Colorado Springs, Colorado area. Put it on your bucket list since it’s definitely a once in a lifetime experience, or if you live in Colorado like I do, a must do over and over.

(Military discount offered to those in uniform)