Which of my readers love cheesecake? I know I do and have been obsessed with them for as long as I can remember. I think it stems from having lived in Brooklyn, New York and eating at one of the most famous cheesecake house in Brooklyn, and no I don’t mean the Cheesecake Factory. I’m talking about Juniors Cheesecake. If you’re ever in the Brooklyn, New York area I would suggest making Juniors one of the places that you have to eat at. Now this isn’t an ad for Juniors because I can NEVER recreate any of their cheesecakes no matter how much I’ve tried. Not sure what their secret ingredient is but I would so love to know it. This is actually my very own recipe and while it may not be as good as Juniors it is pretty amazing if you ask me. Since it’s Halloween time I decided to make a Mini Spiderweb Cheesecake. 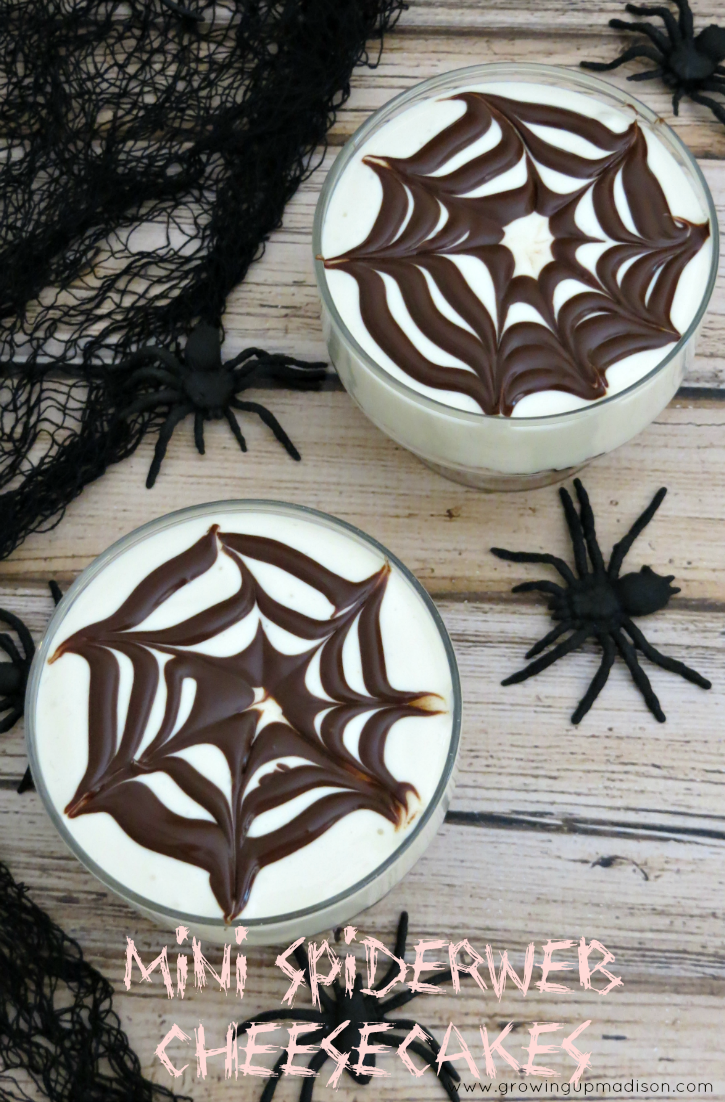 This is what you’ll need: 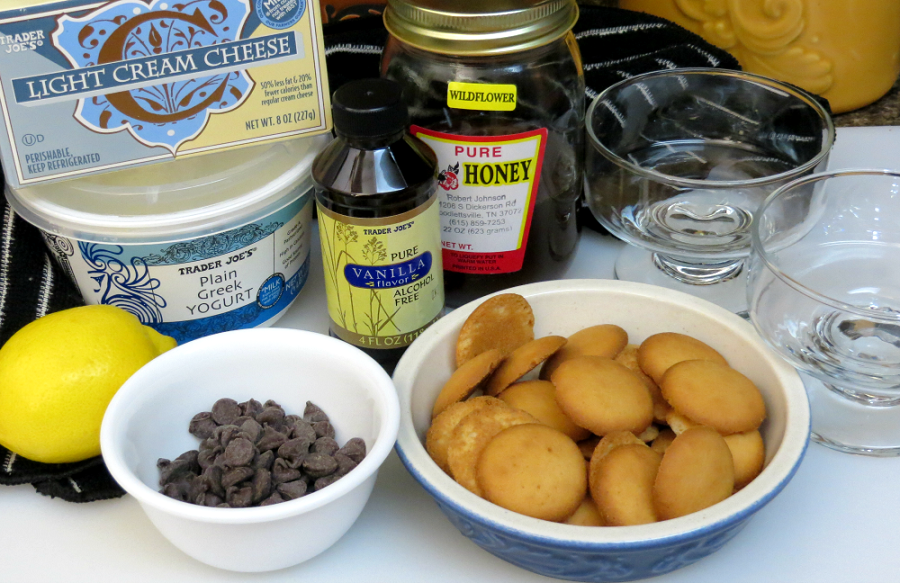 To make the crust:

Crush the vanilla wafers using a food processor or by adding them to a baggie and using a meat cleaver or rolling pin to crush them up. 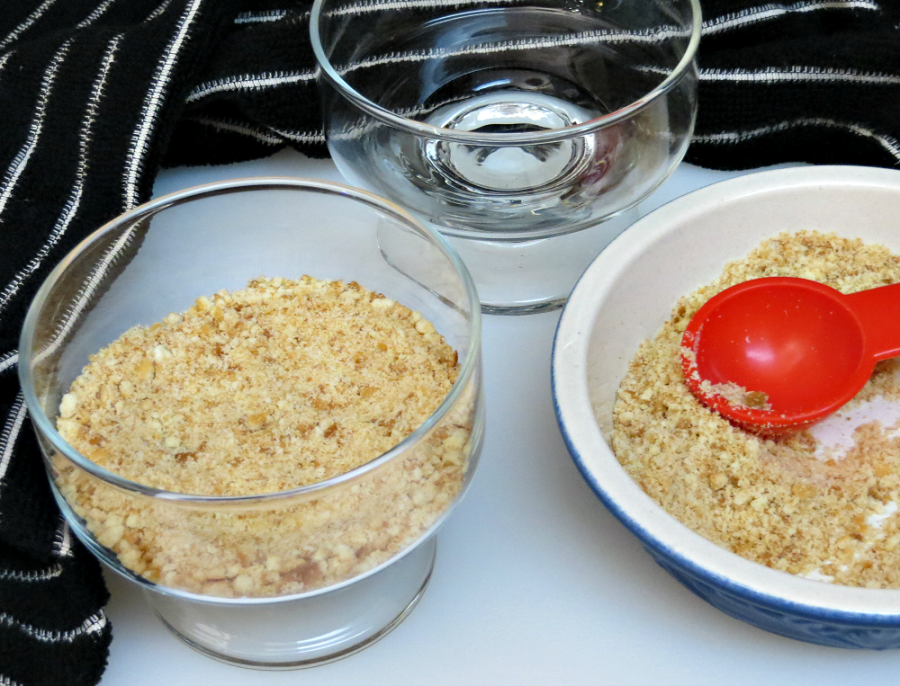 Pour about 2 tablespoons of the vanilla wafer crumbs into the bottom of each dessert dish and press lightly to even them out to make a crust. If you like more crust, just crush up more cookies.

To make the cheesecake filling:

Add the cream cheese, sour cream, honey, vanilla, lemon juice and a pinch of salt to a large bowl and beat until light and fluffy. 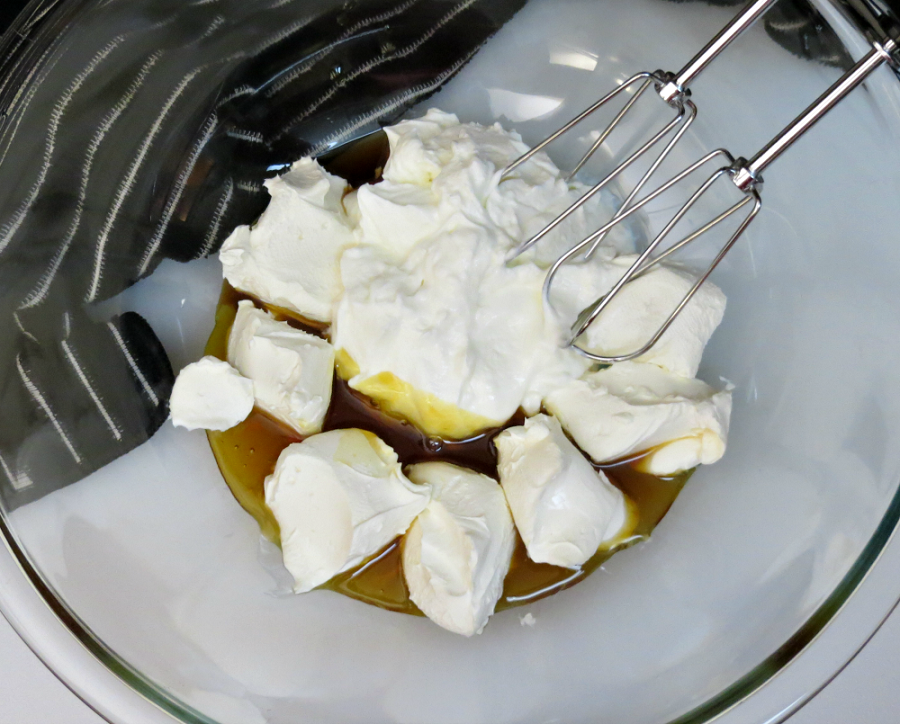 Taste and adjust the sweetness to your liking. We prefer our desserts to be lightly sweetened, so that is how this recipe is written. ** If you prefer a sweeter dessert, I suggest adding powdered sugar rather than honey. If you add too much honey, the cheesecake will not set up. 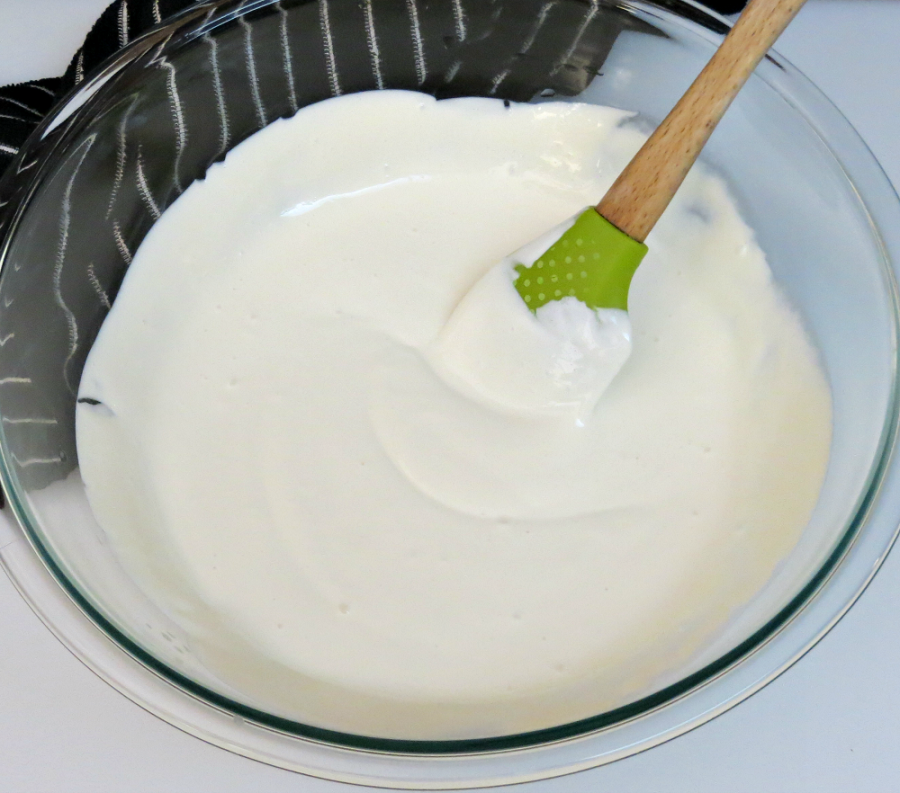 Pour the cheesecake filling into your dessert dishes.

To make the spiderweb topping:

Melt the chocolate in a small microwave-safe dish until smooth. I microwave it for 10-15 seconds at a time to prevent scorching. Be sure to stir the chocolate between each cooking interval.

Allow the chocolate to slightly cool and then pour it into a plastic baggie. 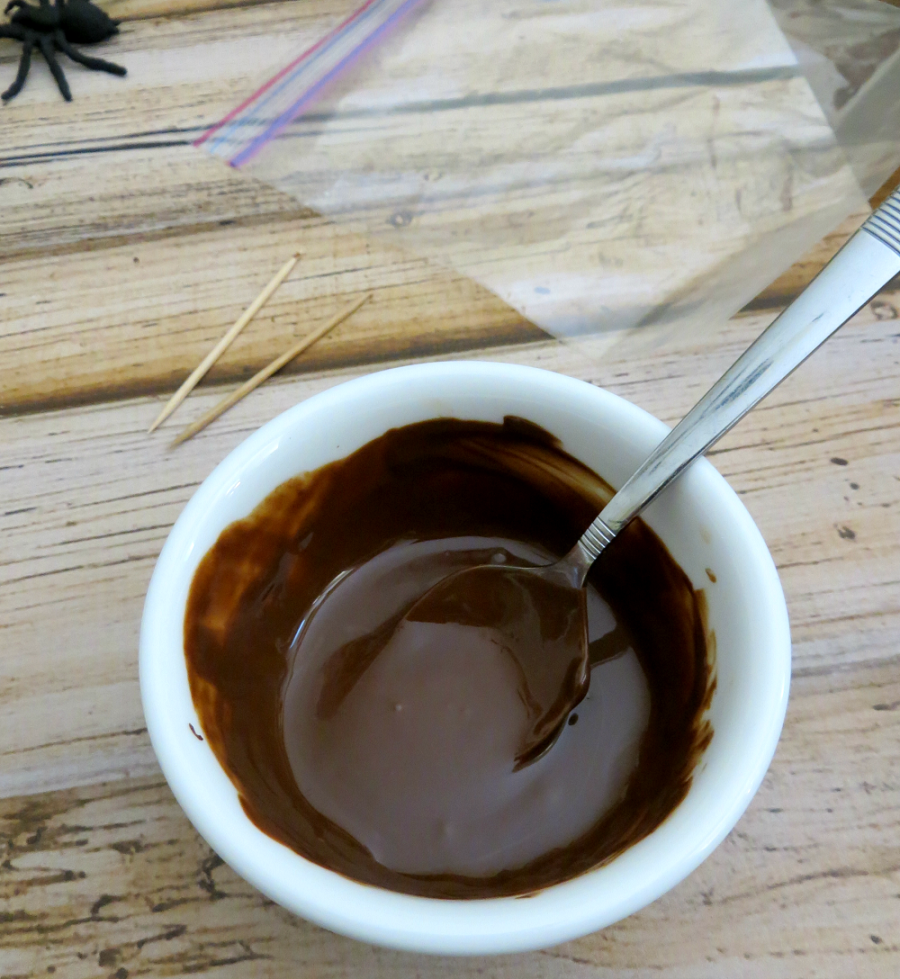 Snip off the very tip of one corner of the baggie. Using a circular motion, squeeze the chocolate onto the top of the cheesecakes, working from the center out. I usually make four circles. 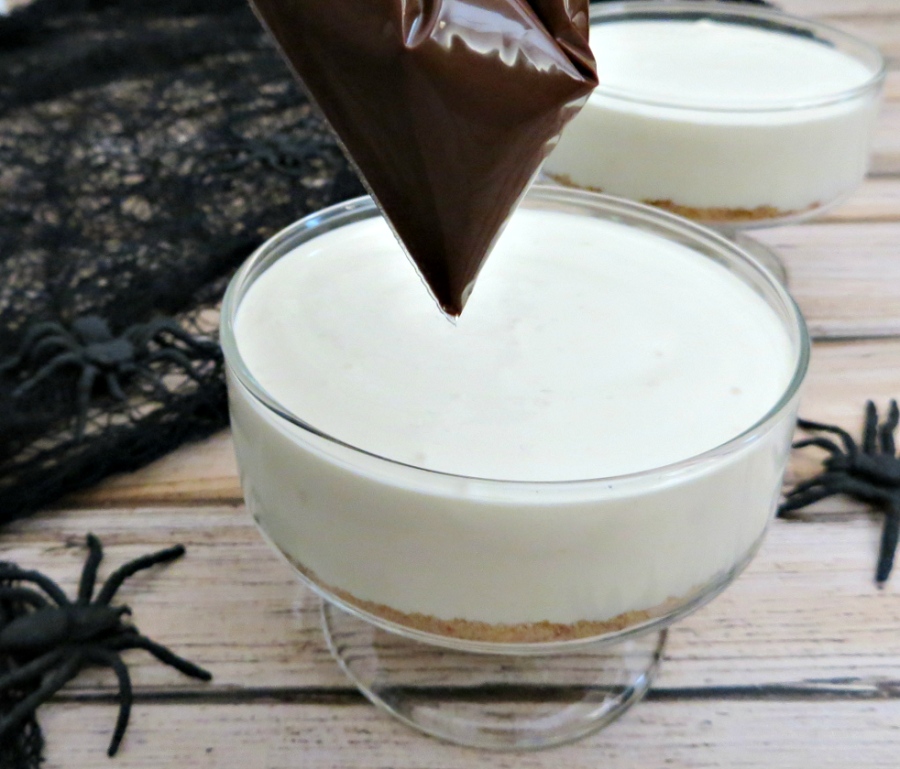 Using a toothpick or the very tip of a sharp knife, start in the center of the chocolate circle and drag the toothpick out to the edge to make a spiderweb effect. 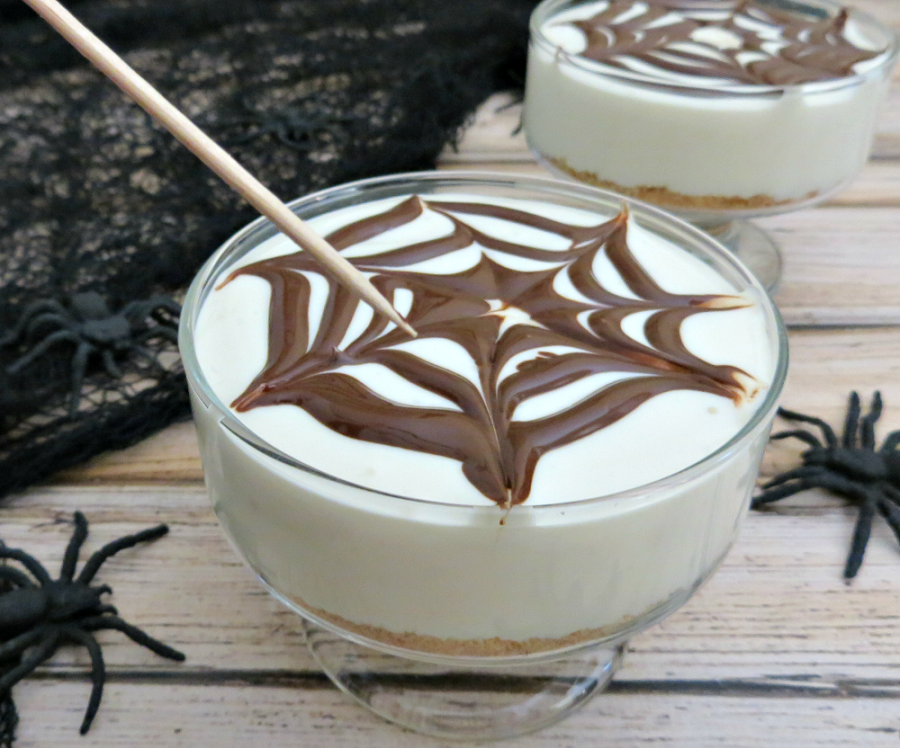 Cover and refrigerate overnight. These must chill for a minimum of 12 hours to ensure they set up, so I usually make them the day before.

Tip: If you’re serving these at a Halloween party or get together, you can pick up plastic spiders and other Halloween props from most Dollar Tree stores to make a spooky tablescape without breaking your budget.

For optimal results, be sure that the Greek yogurt you use is of good quality and very thick. If it is runny at all, this cheesecake will not set up. Trader Joe’s is one of my favorite brands.

** The exact number of cheesecakes this recipe will make will vary depending on the size of your dishes.