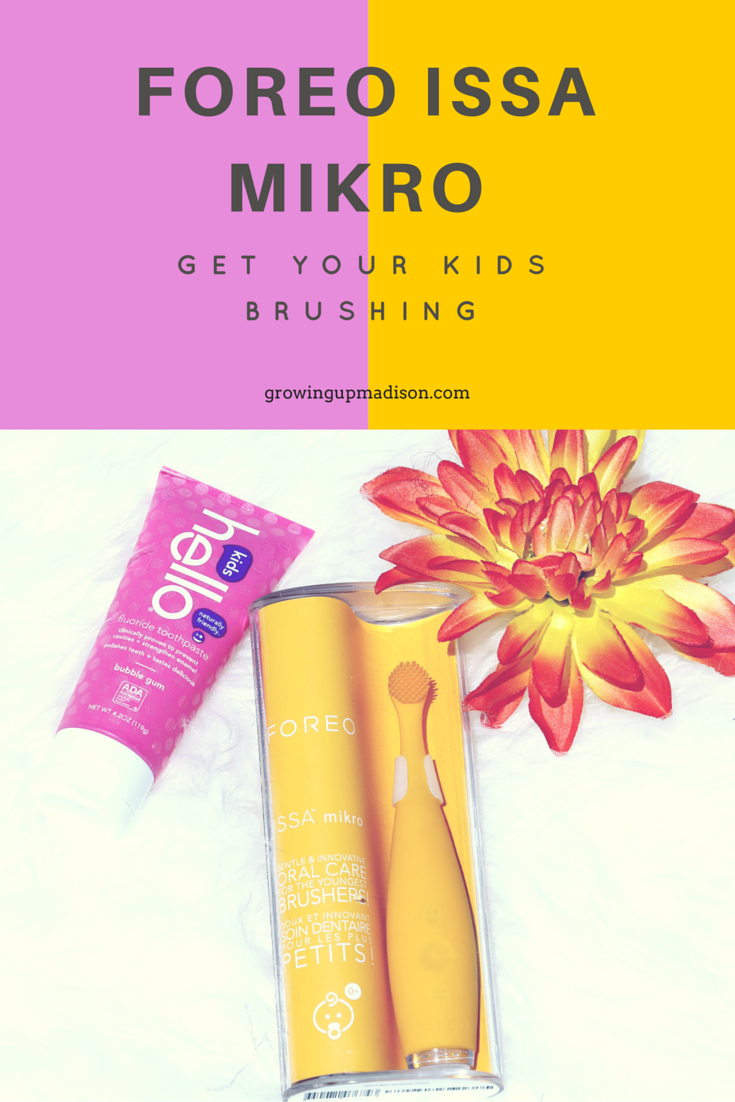 As soon as your little one shows signs of their very first tooth we start thinking of teeth brushing and the dentist. As a matter of fact, I started way before Madison got her first tooth because I would use a soft washcloth and wipe her gums. Once her first tooth showed up around 5 months of age, I got one of those silicone finger brushes and started our brushing routine. Since then it’s been toothbrush after toothbrush trying to find that one toothbrush we just LOVE! I can tell you that throughout the years, we have gone through so many toothbrushes that we’ve lost count.

We’ve tried battery-operated toothbrushes, musical toothbrushes, light up toothbrushes, manual toothbrushes, but they’ve all fallen short. Madison either complained that they were too hard (even though the bristles were soft) or that she didn’t like the color, it seems like there was always an excuse why she didn’t want to brush her teeth. That was until FOREO contacted us asking us to take a look at their new ISSA mikro. I had seen FOREO at my local Sephora and knew about their skincare collection (btw thank you FOREO for sending me your Luna Play, I can’t wait to try it!), so I was intrigued.

We were sent the FOREO ISSA mikro Sunflower Yellow but they are also available in four other beautiful colors: Pearl Pink, Fuchsia, Bubble Blue, and Kiwi Green and is available for the low price of $99. This is our very first sonic pulse toothbrush for her and she loved it. The ISSA mikro comes in a clear case complete with a toothbrush, USB charging cable, and instructions. While it came with a charge I decided to charge it like the instructions directed for an hour before we began to use it. 1 charge = 480 brushes. Don’t worry, the ISSA mikro is totally 100% waterproof, non-toxic, BPA, PVC, latex, and phthalate-free and is completely safe to use, for babies 0-4 years. 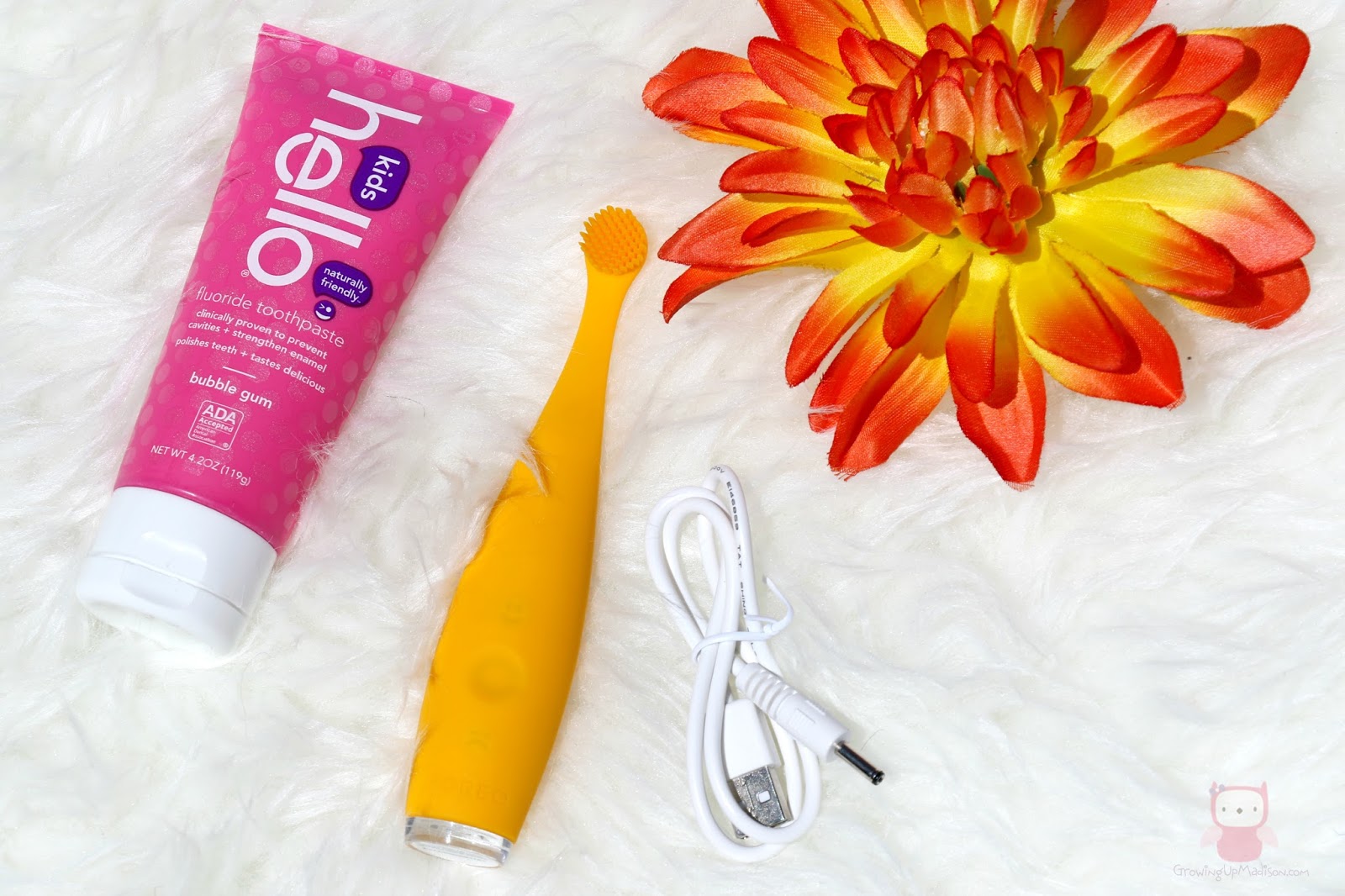 Here are a few of the features that we love about the FOREO ISSA mikro.

The hygienic silicone design. The entire brush is made of soft silicone and is easy to hold and is made to fit in little hands perfectly. The soft, non-abrasive silicone bristles are soft on the gums and help to get rid of leftover food and plaque. Since the bristles are made of silicone it dries rather quickly and thus minimizes the spread of germs by being resistant to bacteria buildup.

Soothing sonic pulse technology. This was Madison’s first sonic pulse toothbrush and I was surprised at how gentle the pulsations were. There are two modes,  brush mode (press the button once) and massage mode (press the button twice) and while we focused more on the brush mode because Madison is older, with most of her teeth, I wanted a toothbrush that would be gentle on her gums and teeth and this was. Brushing with hard bristle brushes damages your enamel which is something that doesn’t grow back so you want something soft for your child’s teeth. 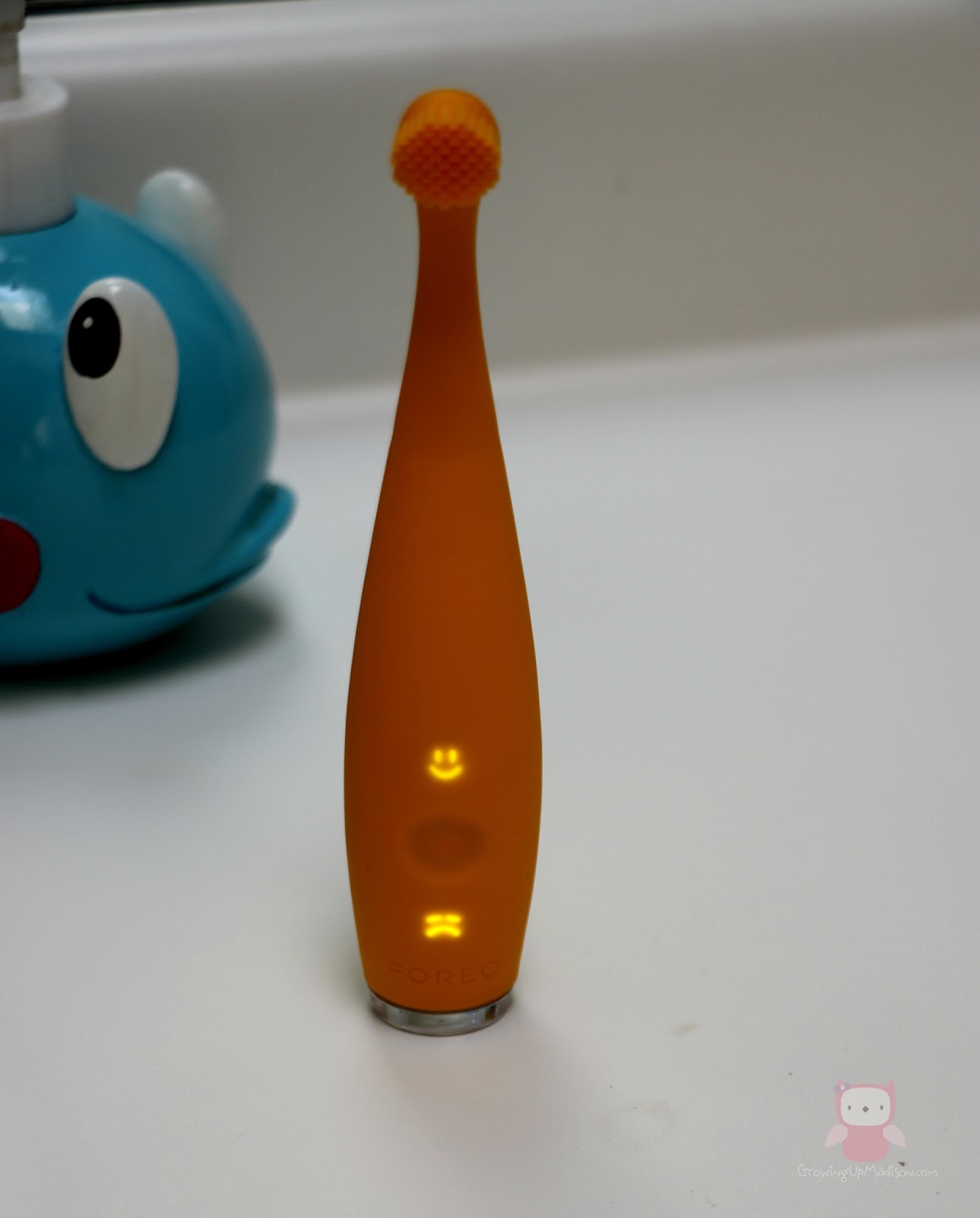 Fun and Exciting kid design. The “smile helpers” were a hit. Glee (the happy face) and Glum (the sad face) are shown on the ISSA Mikro to help encourage your children to keep brushing. When you turn on the FOREO ISSA mikro you will automatically see Glum for just a brief period. Glee shows up after 2 minutes of brushing and of course the more you brush the happier you and Glee would be. Glum would show up if your little one hasn’t brushed in over 12 hours and they will both make an appearance if they haven’t brushed for more than 2 minutes, like in the photo above. Madison would brush until she saw Glee meaning that she had brushed long enough, thus reducing her risk of cavities. 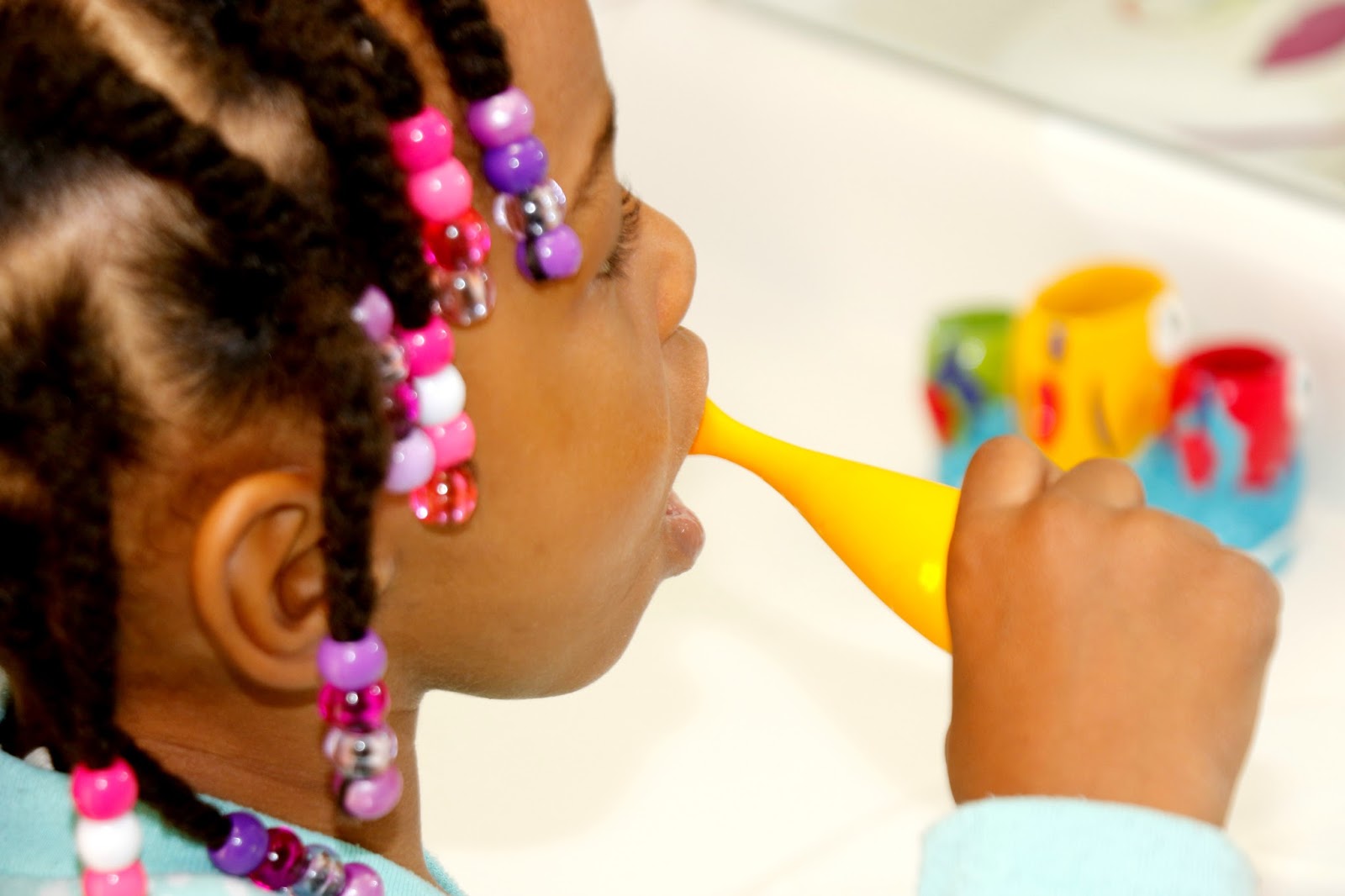 Here are five tips to get your kids to love brushing their teeth.

1. Start Early and Give lots of Compliments. The earlier you start the better it will be. Get your little one involved in the process, teach them how to properly hold their toothbrush and brush on their own, but of course, you’re going to also need to help. Compliment them when they get it right and even when they don’t. Kids love compliments and it boosts their self-confidence, so give those high fives and even verbal compliments.

2. Use a toothbrush designed just for kids and that they’ll just love to use. One such as the FOREO ISSA mikro that shows the happy and sad face. The silicone bristles are soft on the gums and the two-mode vibrations stimulate and massage their gums while getting rid of plaque. 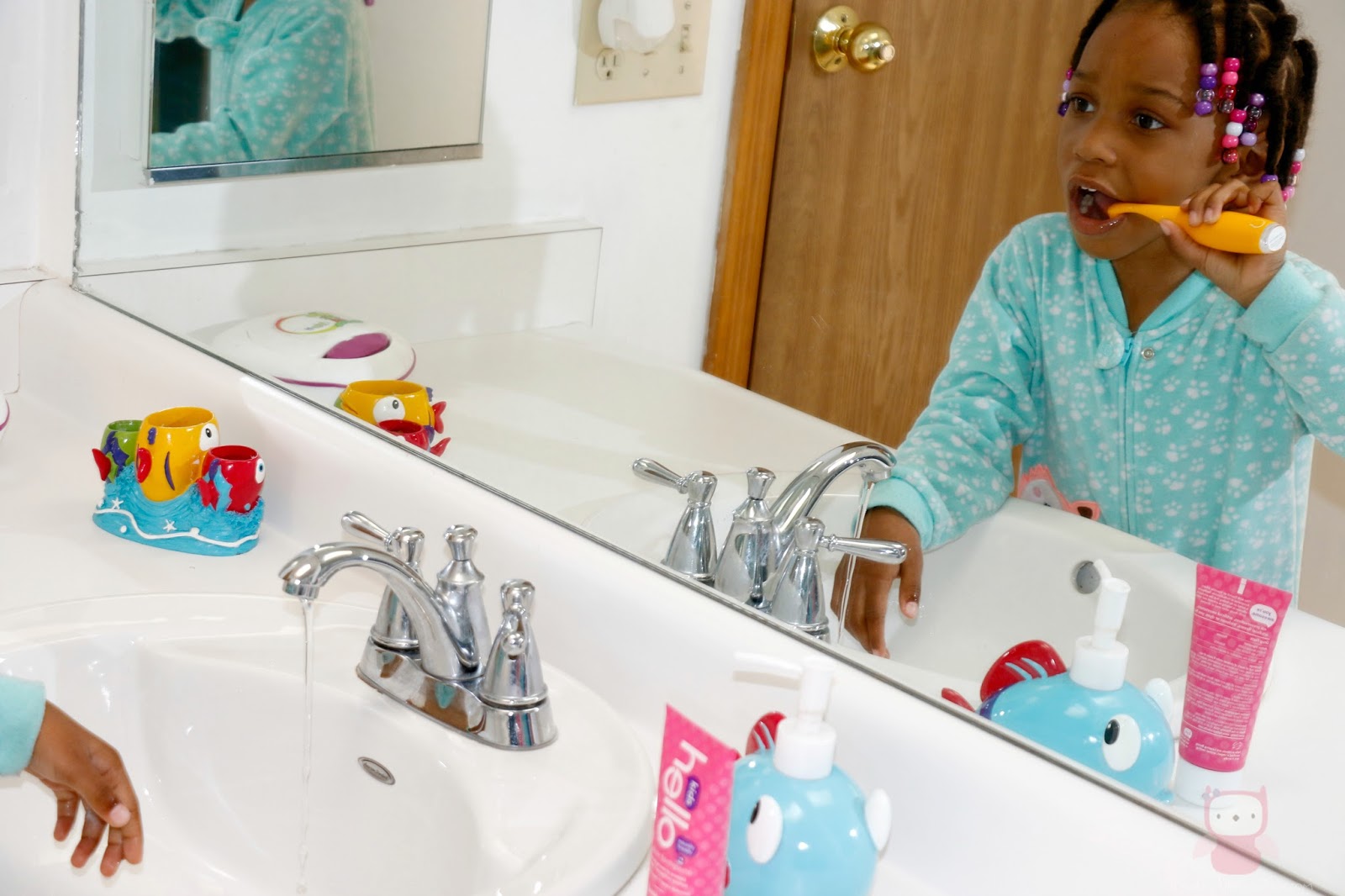 3. Use a Timer. It is recommended that children brush for at least two minutes, but when they’re trying to get back to their favorite tv show or game, they think that two minutes is a very long time. Getting a timer lets them know when the time is up and they may even enjoy watching the time go down.

4. Flavored Toothpaste. I know that my own daughter hates our adult toothpaste because according to her “it doesn’t taste good”. Use a toothpaste made especially for kids and in a flavor that they’ll love. We currently use hello products and their kid’s line is amazing. Madison loves their bubble gum flavored kids fluoride toothpaste. You’ll be amazed at how much longer they’ll brush when they have a toothpaste they love. 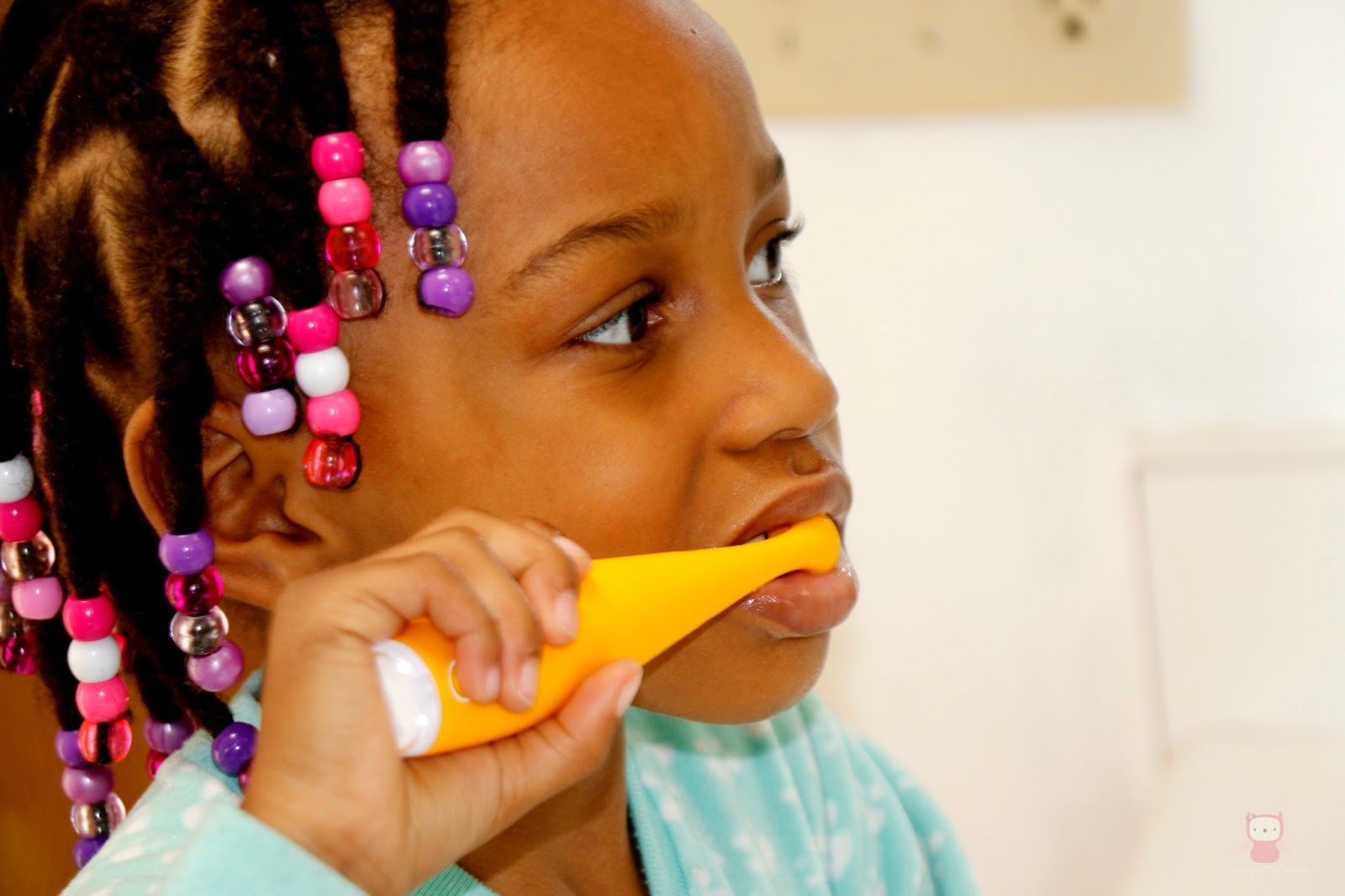 With the ever-increasing rise of cavities in kids younger than the age of 5, it’s good to know that there is a toothbrush that can encourage your kids to brush. Be sure to set up a brushing routine of at least twice a day and get your little ones in the habit of brushing. With the FOREO ISSA mikro I am pretty sure that brushing will no longer be a problem. Now your problem might be getting them out of the bathroom.

Here are the ways you can connect with FOREO: