I remember growing up watching Green Acres, and I guess you know how old I am by me saying that, but the show was hilarious. You take a city girl and put her in the country and the laughter ensues. The closest I got to a farm was seeing the chickens run around outside and the roosters crowing at 6am or even earlier in the morning, when I lived in the Caribbean. When I moved to Brooklyn, New York, the concrete jungle, my chances of going to a farm then became almost nil and the closest we’ve got, was visiting the petting zoo at either the Brooklyn or the Bronx Zoo. Madison my youngest is a lover of animals and has no fear. She loves to touch them, but we all know that some animals aren’t always friendly and it’s not a good idea to go up to a strange animal and pet them. Well Learning Resources has brought a way to introduce farm animals to your child without taking him/her to the farm. It’s an amazing way to learn about Farm Animals Mommas and Babies. When Learning Resources contacted me about checking out their Jumbo Farm Animals Mommas and Babies, I was in Europe and I first thought, well Madison is a little too big for those, but never underestimate the power of toys. I usually consult with Madison before accepting most products relating to her and she said “Yes I want them!”. So upon our return we received a package in the mail with her Jumbo Farm Animals. The bad news was that she came down with pneumonia so it took us a while before we actually opened our box and start playing. Here’s something that most parents don’t think about when playing with toys of any variety, and I class myself in there as well, since most times I just buy a toy and let her play, but what ways can we incorporate learning? The Jumbo Farm Animals Mommas and Babies has numerous ways you can incorporate learning into play. Here are just a four easy ways to do so. 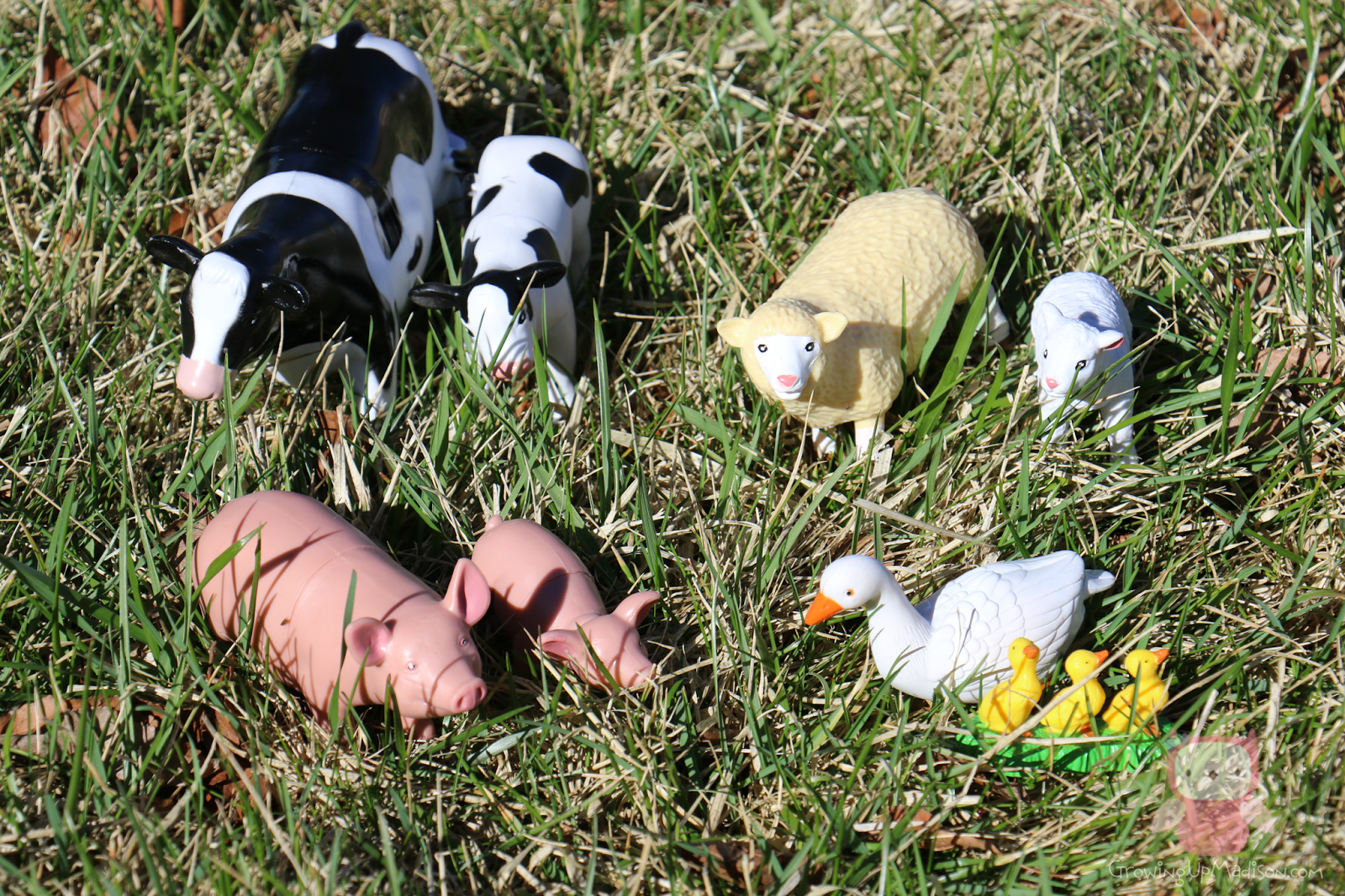 1. Animal Facts: Did you know that cows can produce over 200,000 glasses of milk in a lifetime? Or how about a one-year-old sheep is called a hogget, while a baby is called a lamb. Baby piglets eat so much that they double their weight in their first week of life, and a baby goose is called a gosling.

2. Animal Differences: You can start by asking your child simple questions. Which animal has fur and which has feathers? Do any of the animals lay eggs? You’ll be surprised at the answers and children know a lot more than we give them credit for.

3. Pretend Play: – Pretend play lets your child imagination run wild and there’s nothing better than a kid with a great imagination, they also tend to be a lot more creative. Have your child pretend to be an animal by making animal sounds.

4. Math: This is perfect for the beginner just learning how to count. With 10 animals we can add and subtract and make math time fun. I was very impressed with Learning Resources Jumbo Farm Animals Mommas and Babies. The detailing for the animals was very impressive and I especially loved the fact that they are plastic so they can be wiped cleaned easily with a sanitizing wipe. We all know how kids are when it comes to toys. It’s wipe nose, touch toys, cough, sneeze, touch toys again, so that was an added bonus for me. The pieces are big enough for little ones to play with ease, but they are not recommended for children younger than 2. This is a great hands on toy that will have your kids playing for hours. Make it a learning experience and learn a few fun facts about farm animals yourself and pick a Jumbo Farm Animals Mommas and Babies for your own little ones!

Here are the ways to connect with Learning Resources:

Let’s discuss: How do you incorporate learning with play?