Not too long ago, I shared that my son Mikael was getting a boost of confidence. Not only was he finally getting his smile fixed, but we were doing it using Invisalign® treatment.

This post was sponsored by the Invisalign brand and all opinions expressed in my post are my own. 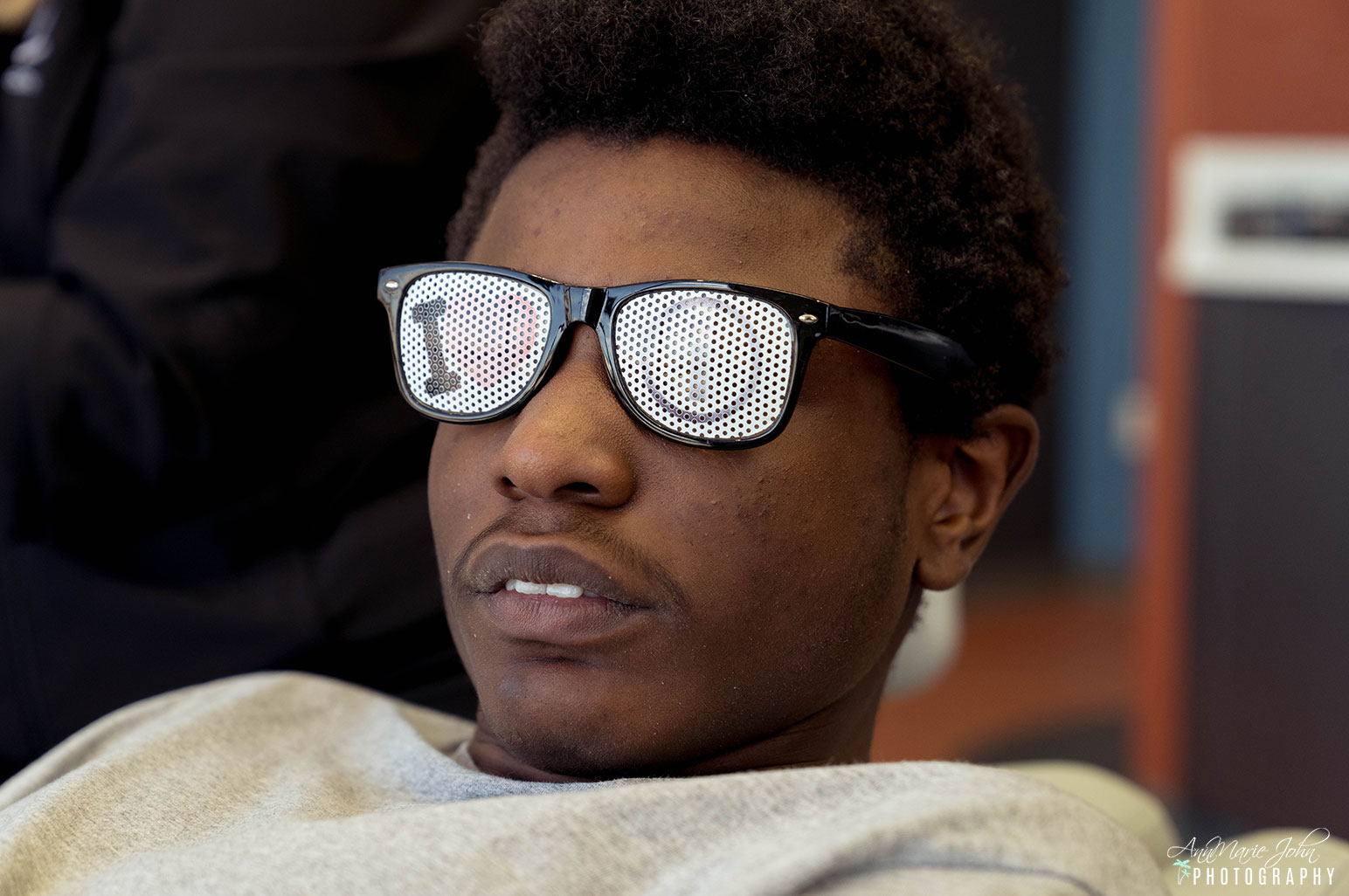 Mikael as most of you know is now a high schooler, and like most high schoolers, friends and what they think of you are important, at least to a teenager. As a mother of two boys, they couldn’t be more different in personality. Kyle, whom many of you know, is the extrovert. Rather outgoing and is always smiling, because he has that perfect smile. Mikael, on the other hand, is my introvert (quite like myself) and hates smiling.

Now, Mikael wasn’t always like this. He used to be very outgoing when he was much younger. Mikael used to be the life of the party and the first to make friends. While he still has friends, he would much prefer to sit at home and play video games or read his comics, instead of going out. Why? Because he’s gotten more and more self-conscious about his smile (mainly his overbite) as he got older.

I’m very straightforward when it comes to items I promote on my site, and I would never tell you that something is amazing, unless I do find so myself. And the Invisalign treatment is fantastic!

When my husband and I first looked into getting Mikael’s teeth straightened, we were told to hold off on getting the work done because he still had quite a few of his baby teeth intact. A few options were available to us, one being traditional braces and another being the Invisalign treatment. We saw commercials for other aligners, but only Invisalign aligners are made with SmartTrack® material that straightens teeth with more predictability than other aligners made from off-the-shelf, single layer .030 inch material.

I thoroughly researched both options as any good parent should and decided that we were going with Invisalign treatment. Here were my five main reasons: 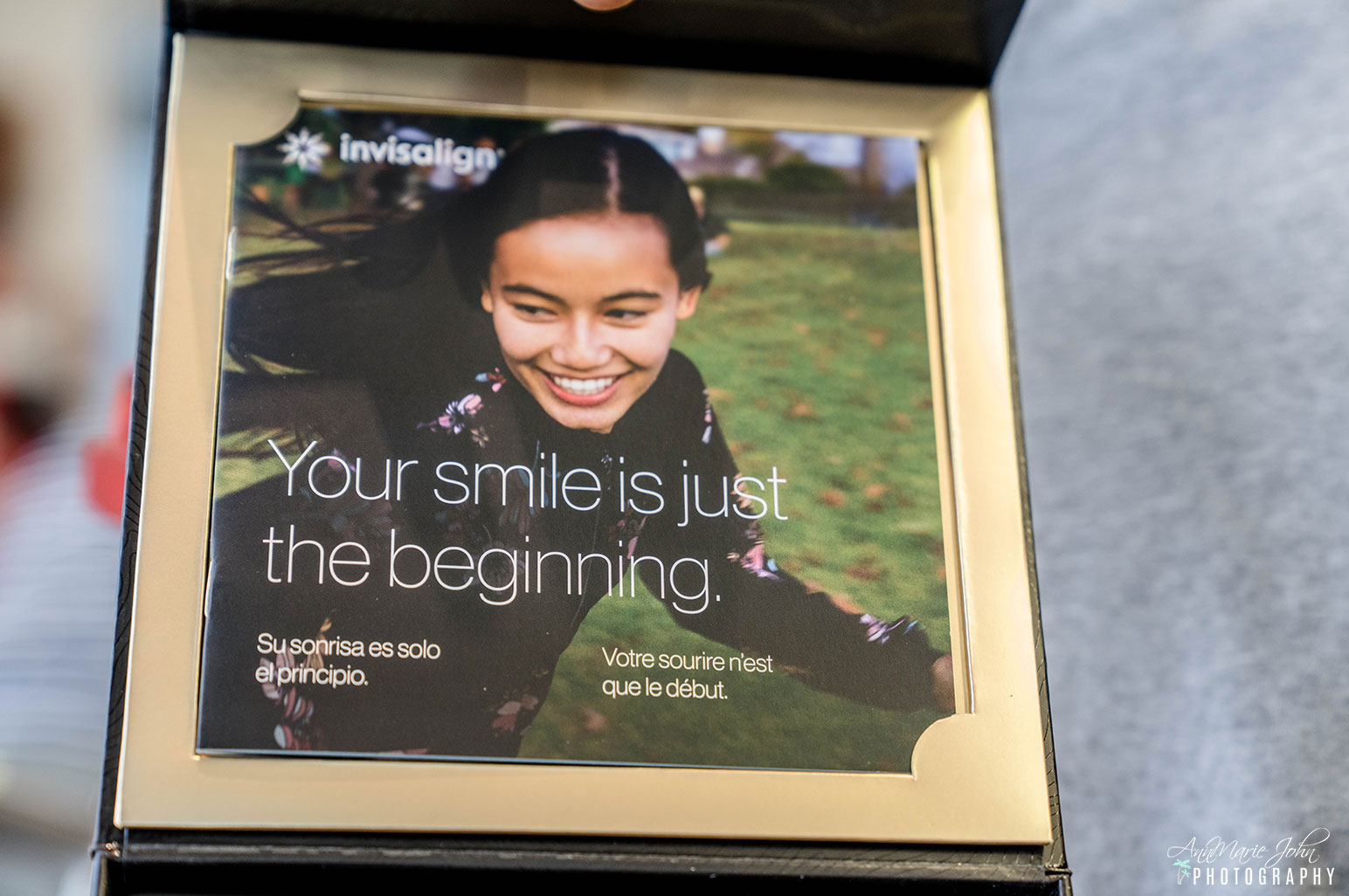 1. When we first explored the option of getting Mikael’s smile fixed, we looked at the overall cost and realized that the cost of both the Invisalign treatment and braces were almost identical, and they were both covered by my insurance. It was really a win-win situation for us as the Invisalign treatment was our first choice if they were both within our budget which they were. While costs can certainly vary by case, you should check with your insurance provider and doctor to explore costs and financing options for your child’s treatment.

2. Another significant reason was one that Mikael’s dentist mentioned that would have been an issue for me with my current travel schedule. Emergency room visits! Mikael will be joining me on one of those trips for an entire two weeks, I’d much prefer not to have to rush him to an orthodontist for an emergency visit in another country, due to broken wires or brackets. (I had one such experience with Madison in London and it was not cheap!) If an aligner gets broken or lost, he can simply move on to the next aligner in the set, which gives me peace of mind – and lots of saved money.

3. Quite unlike metal braces, where the entire world knows that you’re wearing them, (after all, how can you bypass the metal on your teeth showing) Invisalign aligners are virtually invisible. Unless you tell someone that you were wearing them, you’d never know. I’ve also never liked the look of traditional braces and hated the fact that not only did they look uncomfortable, but the whole world knew that you were wearing braces. If you’re already self-conscious about your smile, why bring up another issue to worry about?

4. Invisalign clear aligners are also removable, daily as needed. If you’re wearing traditional braces, you know that only a doctor can remove them. However, Mikael could remove his Invisalign clear aligners when he’s eating, brush his teeth, floss and put them right back in. So not only does it straighten his teeth, but they stay clean as well. Remember good oral hygiene is still a must and the Invisalign treatment just makes it easier to do. It’s important that he remembers to always brush and floss in between meals.

5. Mikael was all for them! I never force my kids to do anything that they’re not comfortable with and prefer giving them choices. When asked which he’d prefer, Invisalign treatment was his choice. After all, he’s the one who’d be wearing them, right? 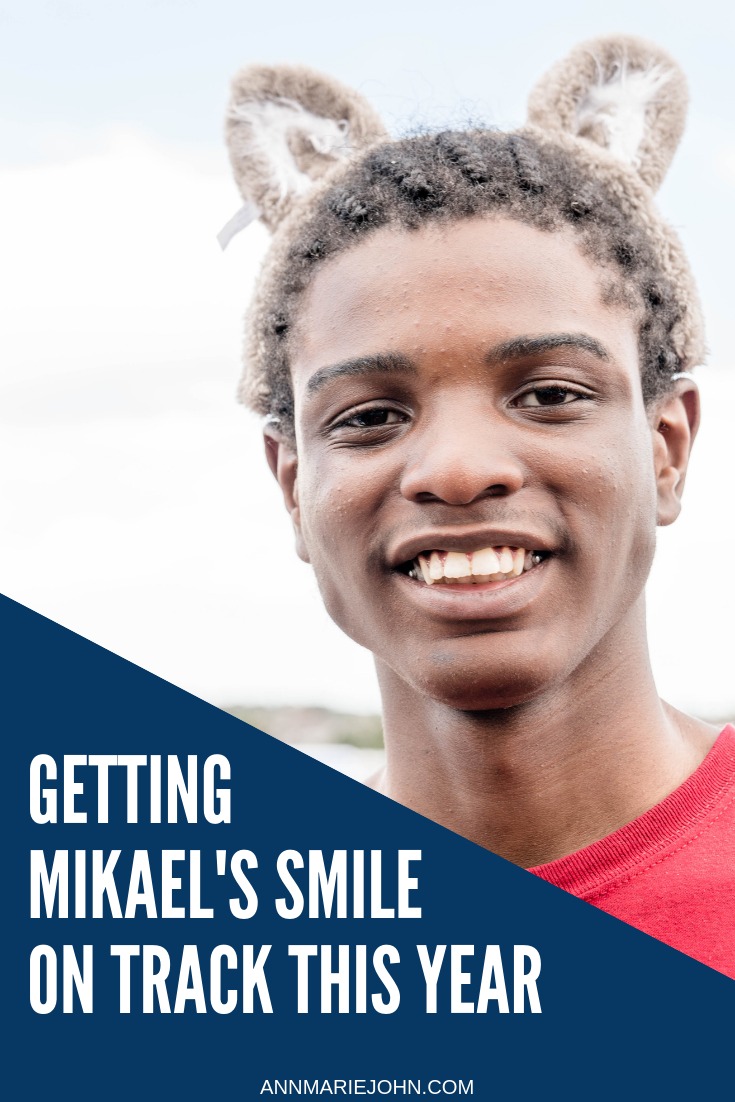 After our initial consultation, Mikael’s impressions were sent off for his aligners to be made, and we were given a call once they were ready for pick up. Getting that call was one of the best days of his life. Not only was he excited but so was I.

Personally, I’m ecstatic that this happened during the summer. Not only was he out of school, allowing him not to miss any classes, but it would also give him time to get adjusted to wearing his Invisalign clear aligners before school restarted. Thus, giving him a headstart to that brilliant smile that I know is there and just waiting to shine. 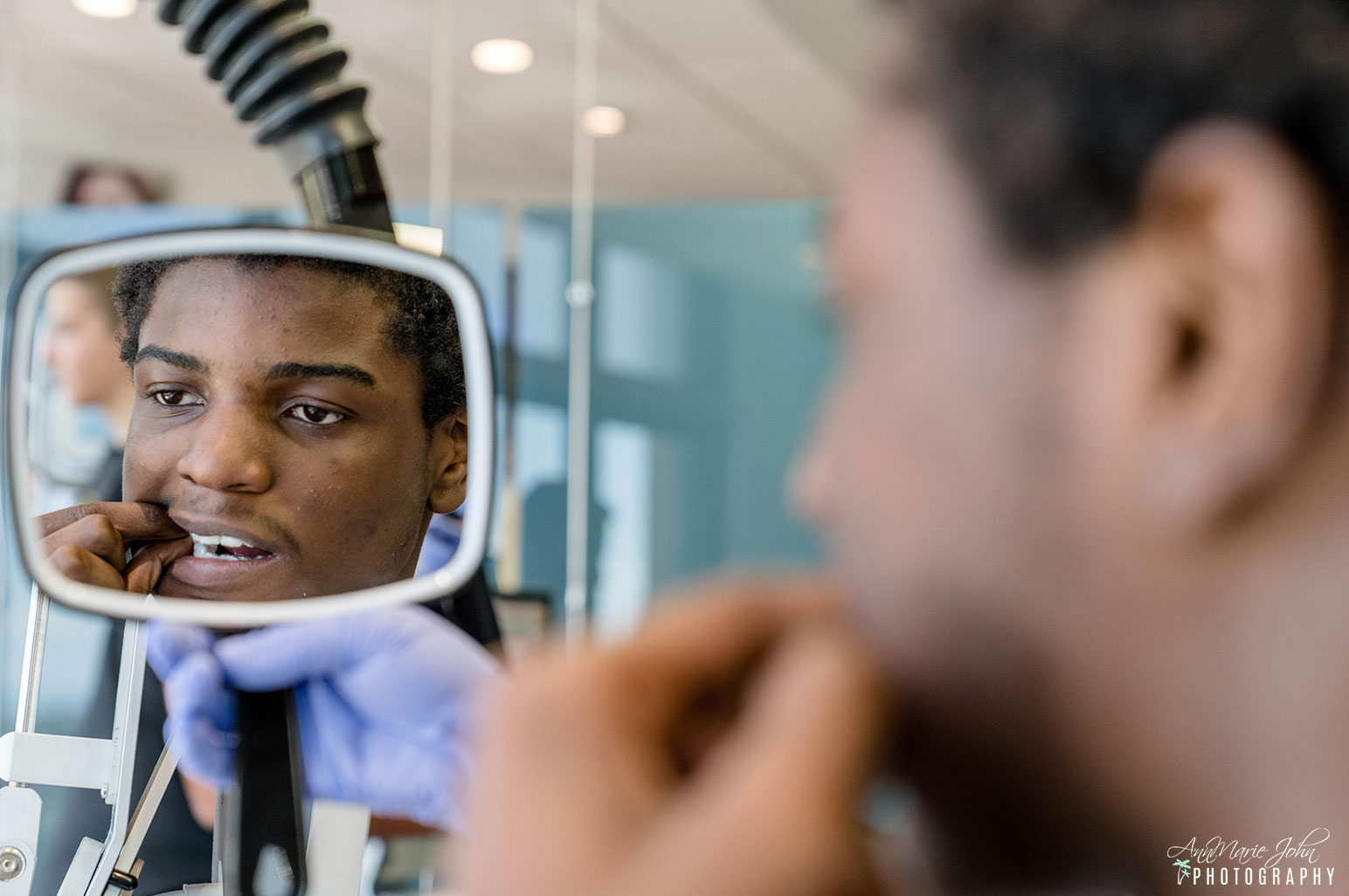 Here’s a quick catch up of the treatment that Mikael is receiving. Due to his significant overbite, Mikael needed Invisalign clear aligners with Mandibular Advancement feature. This will gradually move his jaw forward while straightening his teeth as well, improving his bite and giving him that straight smile that he’s always wanted.

He needed to learn how to insert his aligners. He also needed to know how to take care of them, and when he should change them out to a new one.

OK, so it has been two weeks since he’s been wearing his Invisalign clear aligners, almost for 24hrs (unless eating, when they’re removed) and we both can see changes already. It was advised that the aligners be worn 20-22 hours per day. At the beginning of the treatment, I had to remind him a few times to put them back in after eating. Now I no longer have to tell him. He’s gotten used to wearing them and now only takes them out when he needs to eat and brush.

There is no doubt that the Invisalign treatment works and can improve Mikael’s smile up to 2x faster*. I can see it, and so can everyone else. And when we see him smiling more and more, and embracing his smile, we know that he knows it works.

His smile is on track, and we all can’t wait to see how it all looks at the end of his treatment. Keep following along our journey and witness how Mikael’s smile gets better and better thanks to Invisalign clear aligners. And if Invisalign treatment can fix Mikael’s smile, they can do the same for your teen’s smile. While I can only share our experience, I suggest you learn more about the treatment and how it can work for your teen as well. 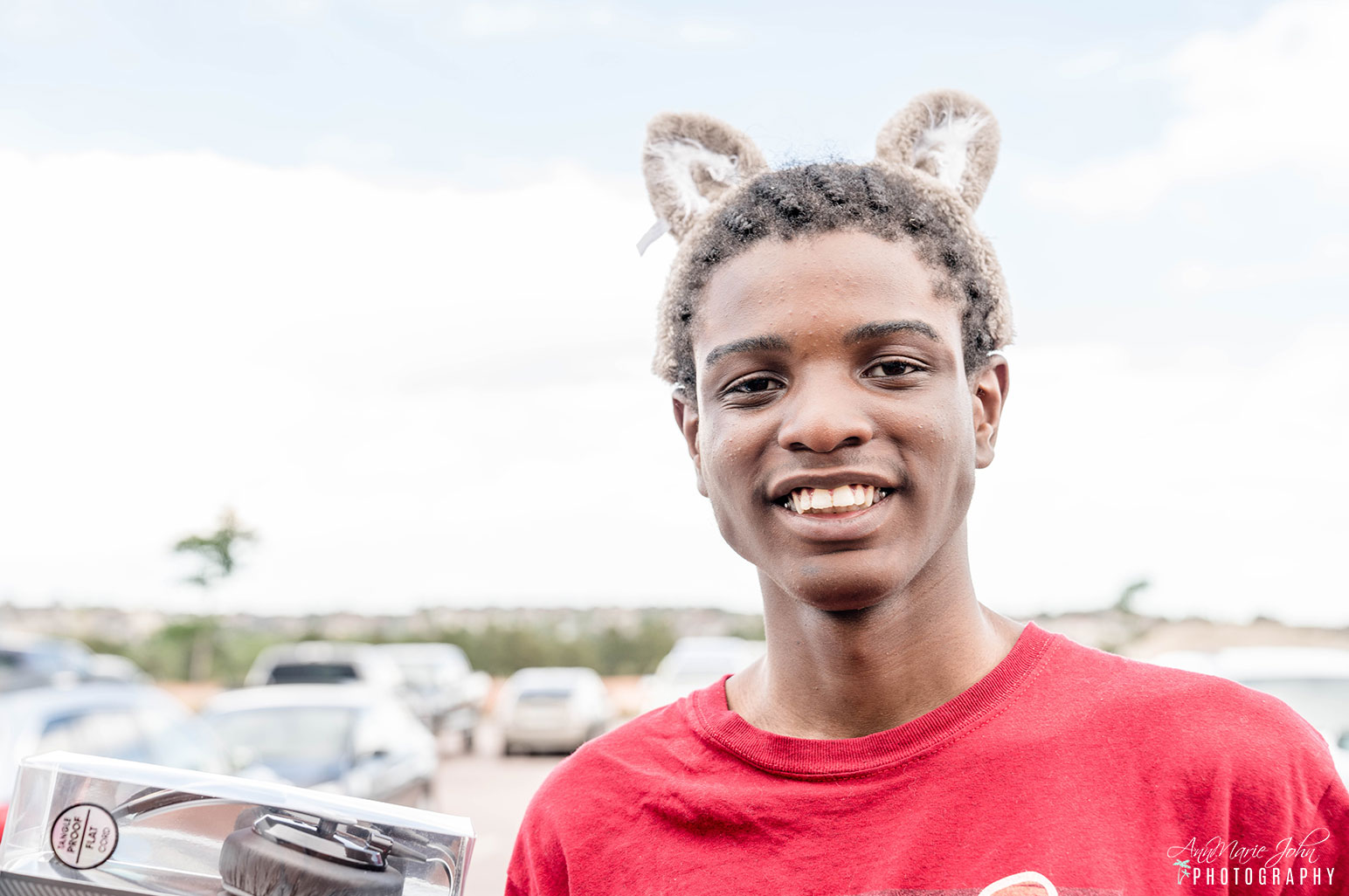 Consider a free smile assessment (I mean come on, it’s FREE) and visit the Invisalign website and locate a doctor near you that specializes in Invisalign treatment. Help your child get the smile they desire and boost their confidence. There’s no time like the present, get it done today!