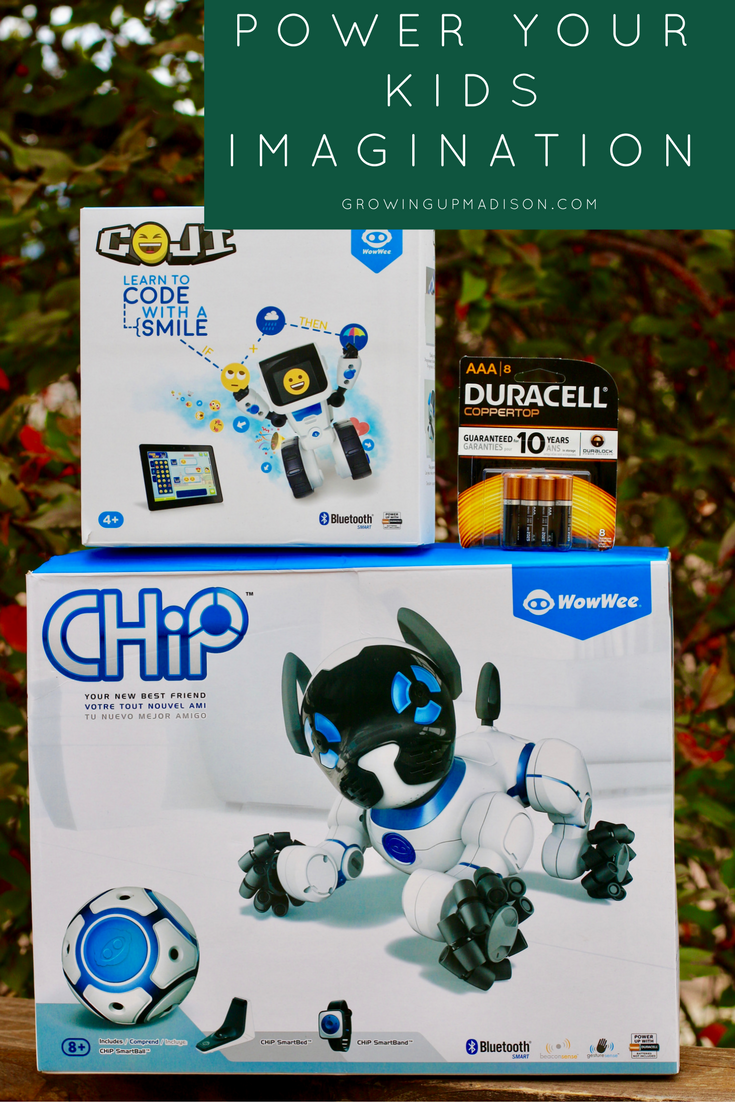 We are now living in a technological world, where almost everything is done using technology, it’s also why I truly believe in our kids having a STEM education. Our children are advancing in an alarming rate, and what I knew at age 4 is nothing compared to what my daughter knows. My pre-schooler can probably use the iPad much better than I can, and I’m always amazed at what she shows me, because to be honest, I had no idea those features existed. In a world where she is going to be exposed to technology, why not make it interesting and fun. Sure we have all those “smart apps” and we have all the educational apps, and we like to say, “let’s make learning fun” and that’s exactly what WowWee did when they came up with these two new “toys” that I’m going to be telling you about today. 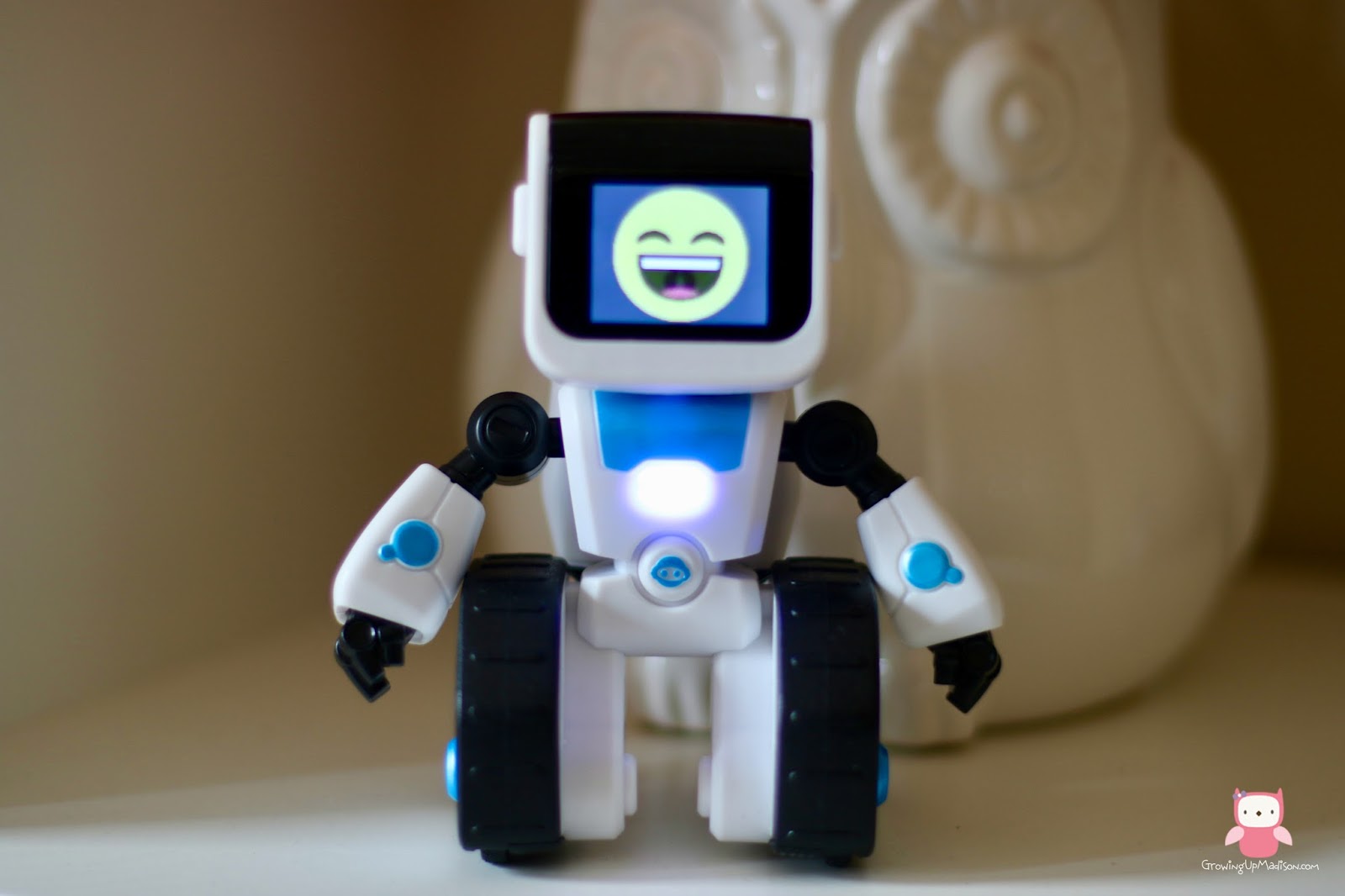 Madison loves learning how things work and even as a pre-schooler, I’m of the belief that you’re never too young. As a matter of fact, a lot of people were upset that I handed Madison an iPad at the age of 6 months, and since then it’s been no turning back. I do everything with limits of course and of course that was no exception. While most of her toys are hands on to build her imagination, she does have quite a few toys that do require batteries and takes her imagination to that next level. The WowWee COJI is one such toy, and she couldn’t wait to rip into the package. However, it needed 3AAA batteries and I NEVER use anything else but Duracell batteries. Not only do they last a long time, I know that I can depend on them. With a little guidance, she was able to install the batteries and I downloaded the COJI app from the app store and we were on our way to play. 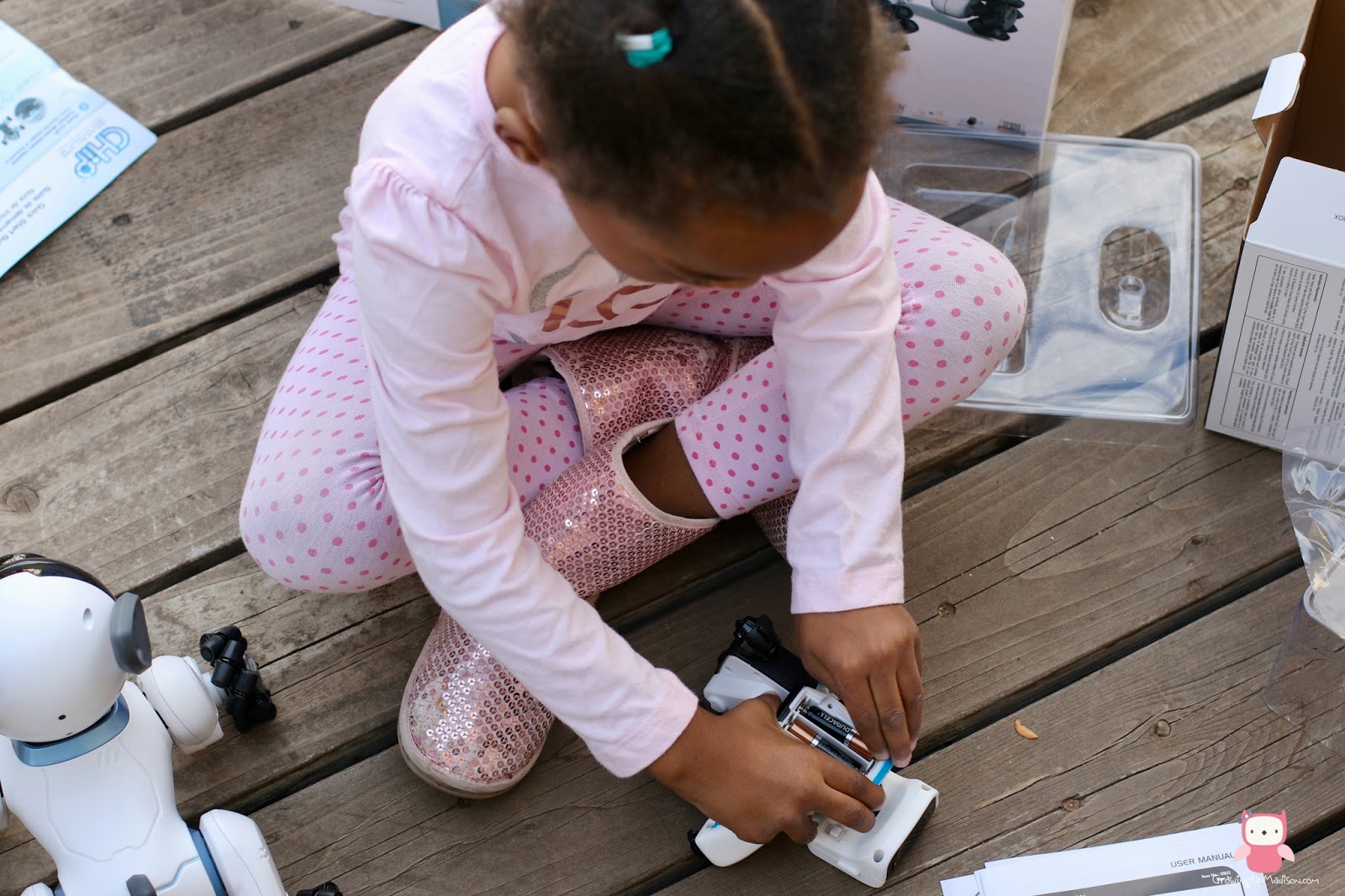 Now you may be wondering why do I need to download an app to play. Well the WowWee COJI is no ordinary toy. It’s actually a coding robot that teaches the basics of programming using something that our kids already know and love: Emojis! Madison was now learning sequencing, learning how to string commands along and watch COJI execute them. She was learning the basics through trial and error but the best thing was that she was learning without realizing that she was actually learning, all because she was having fun. 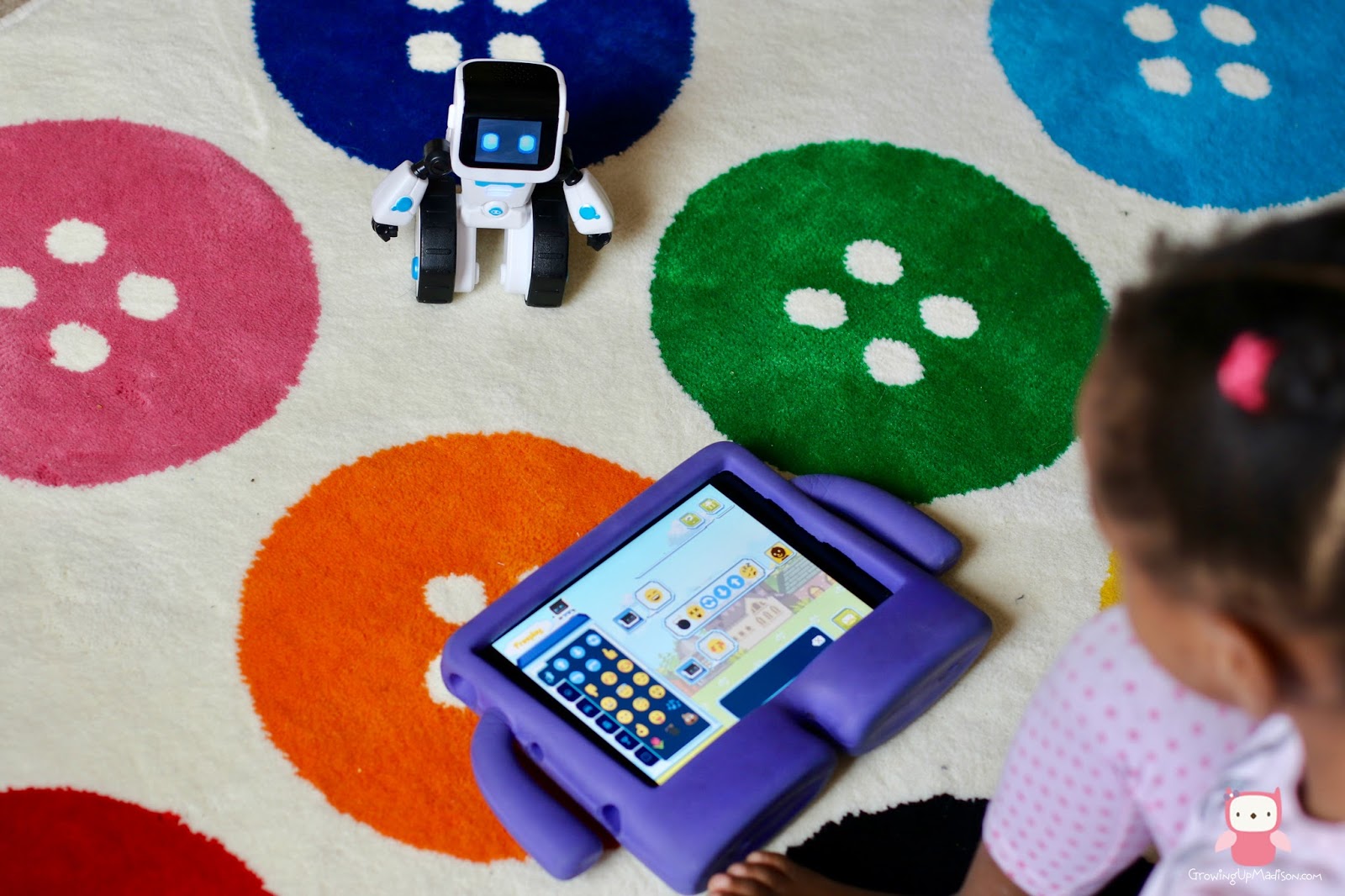 She was able to do all this using the app on the iPad and it was fun watching her select the commands and watching COJI’s face light up with the command that she executed. She was mastering her critical thinking without even realizing it. Now COJI can be also used without the app since he reacts to physical stimulation. You can pick him up and tilt and shake and he would also respond to you but it’s so much more fun with the app. Well that’s what Madison says.

Note: COJI does not run well on carpet. 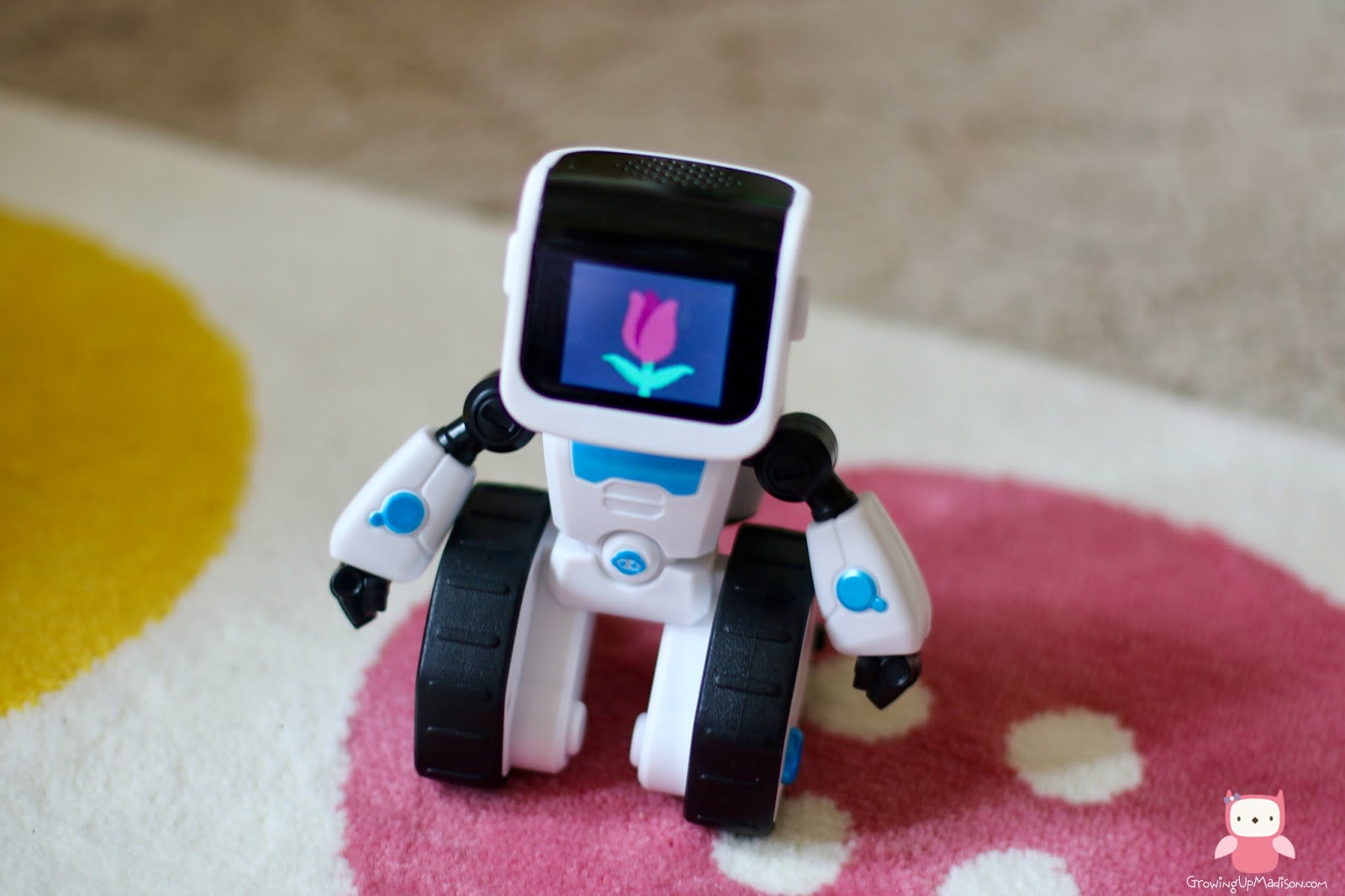 COJI is a ton of fun and also comes with levels of challenge so that you child can build his/her confidence and programming skills at their own pace. They get to learn problem solving all through game play and without even realizing that they’re learning. For those with an android device, COJI is also compatible so no need to worry. COJI is also recommended for children ages 4+ and would make the perfect gift, after all Christmas is right around the corner. 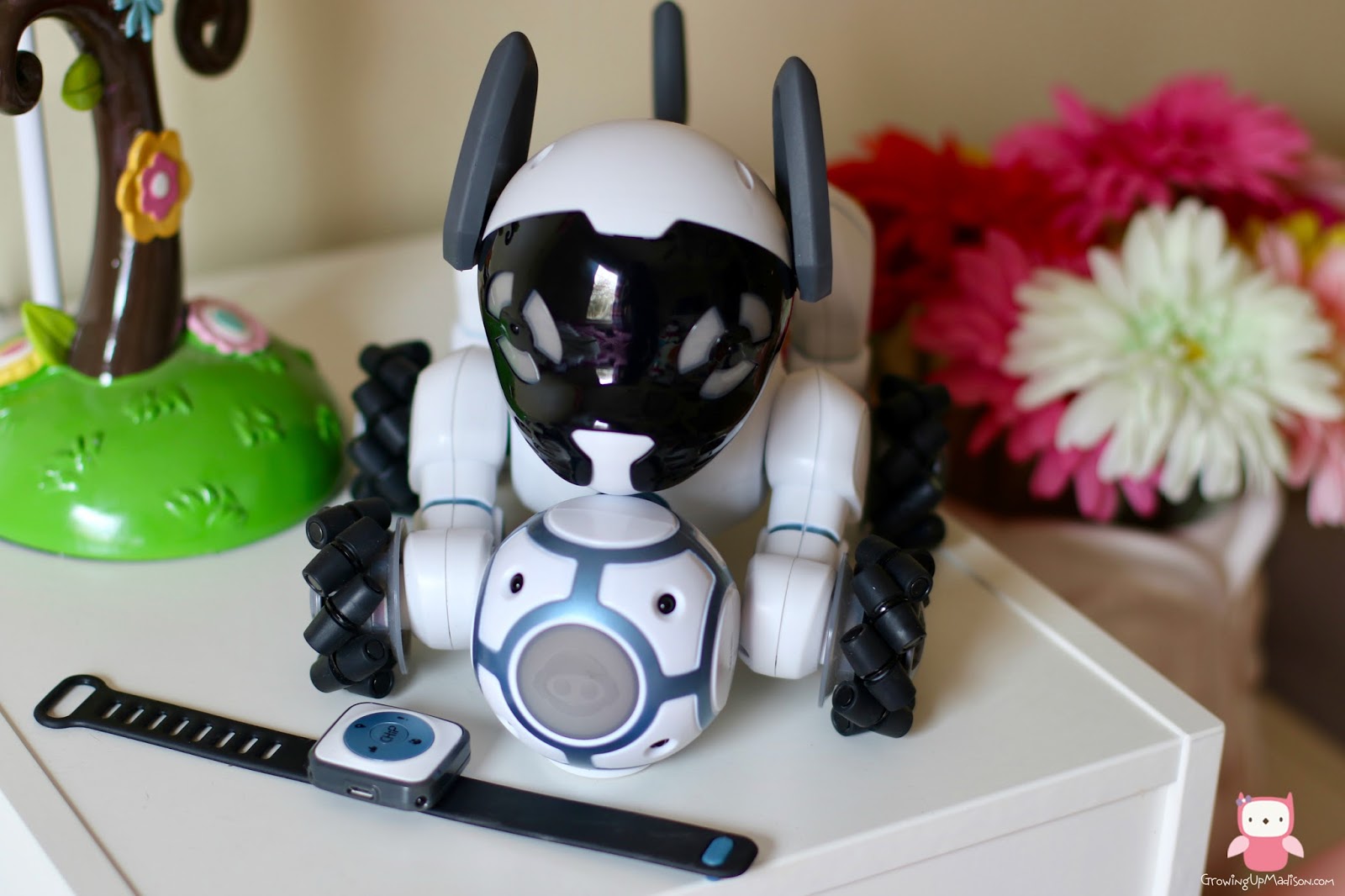 Now I want to tell you a bit about WowWee CHiP. If you have a child that is wanting a pet and you’re on the fence, I have to say that this is the best alternative. It’s a pet that they can take care of without the actual “mess”. As most of you know, my son is autistic but that doesn’t stop him from wanting to learn and I encourage his love of science and learning. As a matter of fact, Madison wanted CHiP, while Mikael was more interested in COJI, that was until he saw all that CHiP could do. CHiP comes with a SmartBall and a SmartBand that utilizes bluetooth technology, but which also allows him to actually play with you. CHiP and the SmartBand comes with rechargeable batteries included that comes with a USB and SmartBed with AC adapter, while the SmartBall requires 4AAA batteries, and once again Duracell was there to rescue me. 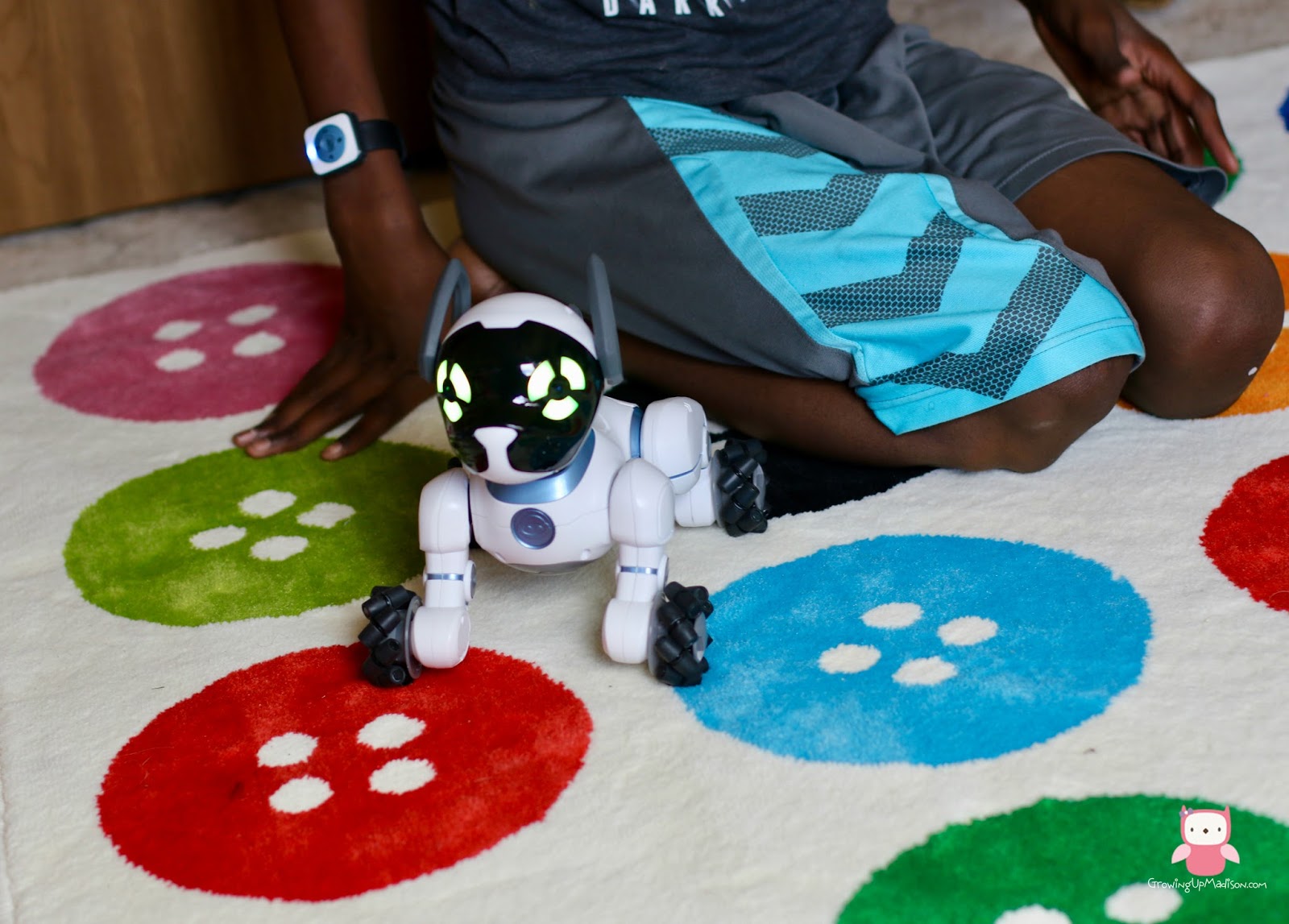 Now CHiP is just like a real dog, but unlike our own cocker spaniels who doesn’t listen to anything that we tell them, CHiP actually responds when you call and even plays fetch. CHiP uses bluetooth technology and just like COJI, there is an app which you can find in both the android and app store. However CHiP can be used by just using the SmartBand and it is how he recognizes you. I couldn’t personally tell you how it worked so I got Mikael to explain it to me.

The SmartBand (shown below on his arm) is almost like a watch but is what controls CHiP. Using bluetooth technology they pair together and once it lights up blue, you know that they’re both connected. The buttons are as follows:

a. The location pin at the top

b. The CHiP button in the center

d. The exclamation point on the right

e. The Doggy icon at the bottom 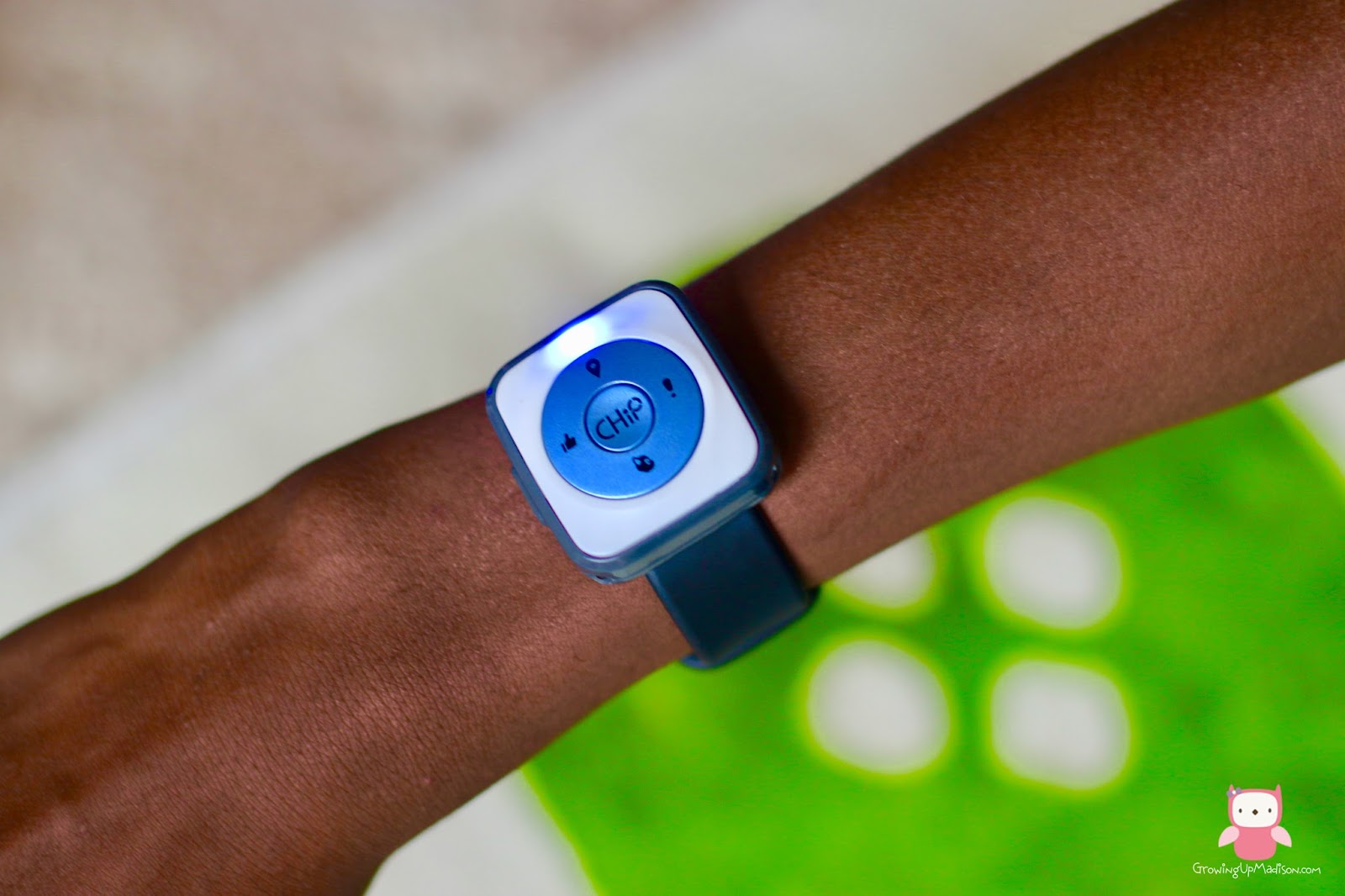 CHiP uses speech recognition technology and you can train CHiP that way. You usually start off by saying “Hey CHiP”, his eyes will turn green and he’ll woof and listen for your command. Commands such as “fetch”, “sit down”, “let’s dance”, etc. He also just loves when you pet him just like a real dog but be sure not to poke him, because also like a real dog, he doesn’t like it and gets mad. CHiP also just loves playing fetch with his SmartBall. His sensors allows him to find the fall and he chases after it and brings it right back to you. There’s a magnet that allows him to hold it while he’s bringing it to you. 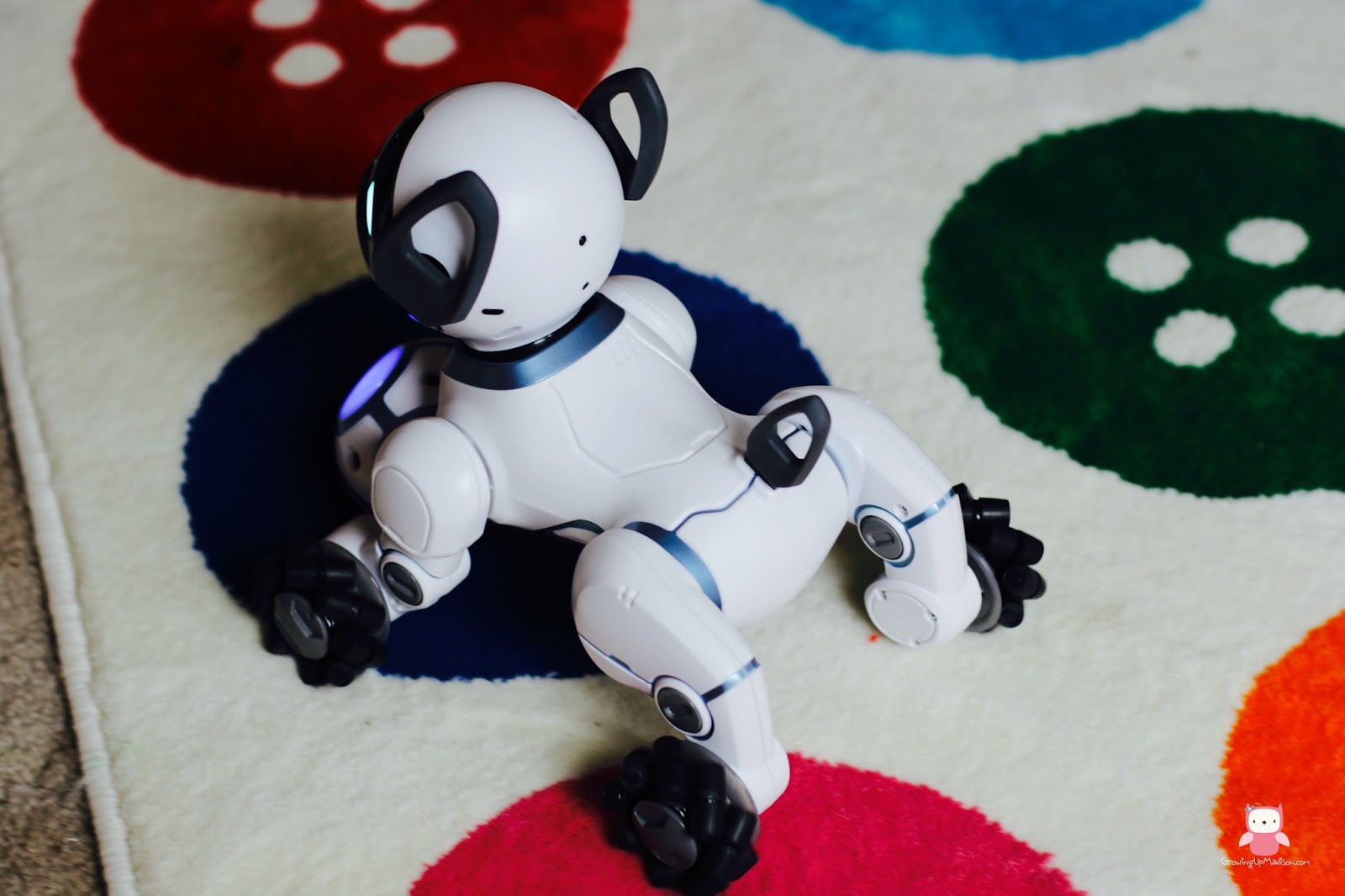 When CHiP is low on battery he will find his way to his SmartBed and automatically charge himself until he’s ready for you to play with him again. You can know when he’s ready for a charge because you’ll also get a notification to your SmartBand, and also on your app. Your app is however needed for updates that you may receive to keep your CHiP up to date.

WowWee CHiP is a great way to get your kids to learn about taking care of a new pet, before introducing a new pet to them. And something to note is that no two CHiP will ever be the same since he relies on what you teach him. He’ll be unique only to you. Mikael is super excited that he got his very own robotic pet and I’m happy that he has CHiP to call his very own.

Note: WowWee Chip can run on all surfaces and you can also rename him from the app. 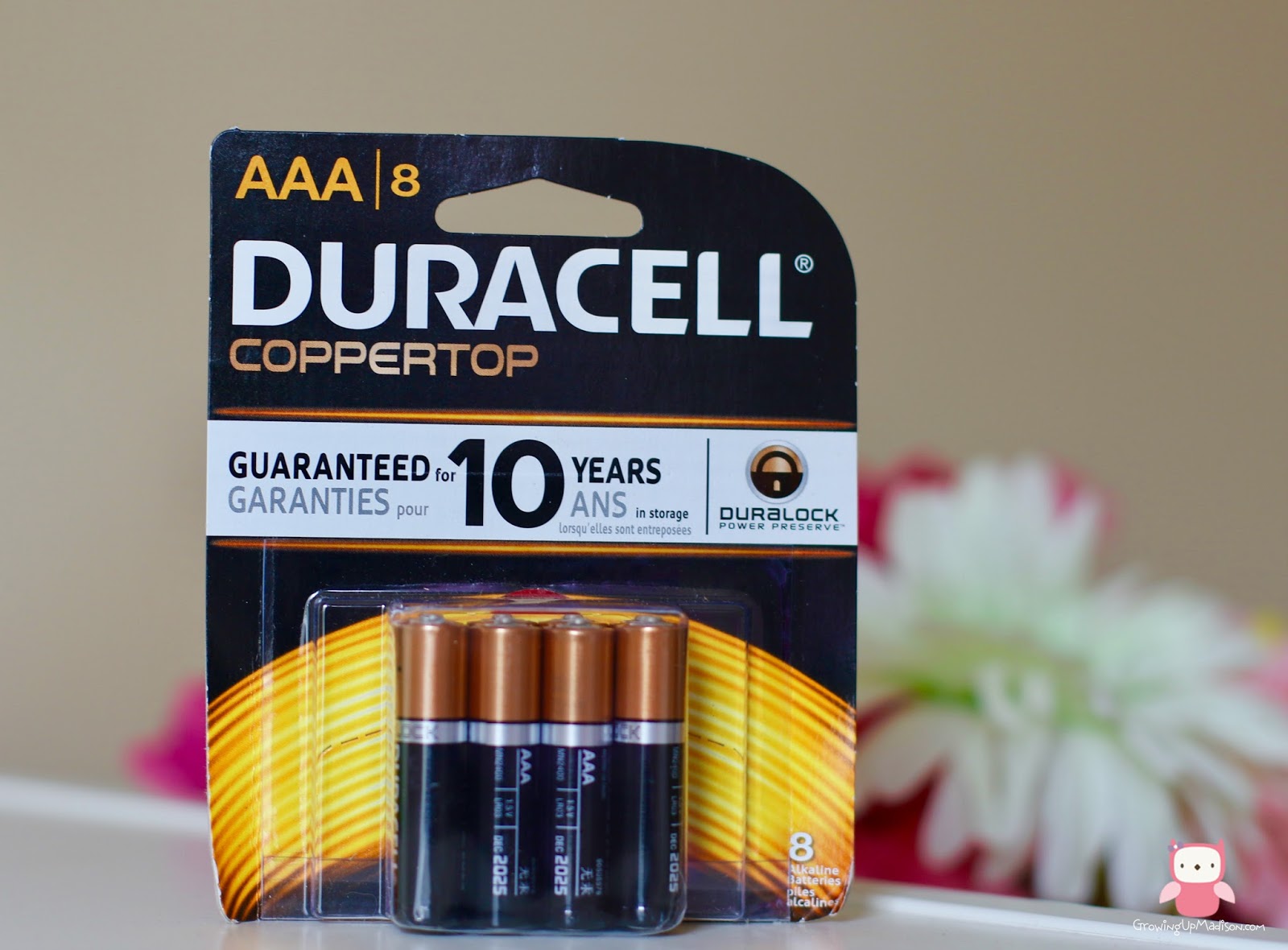 You can purchase both WowWee CHiP and COJI at Toys”R”Us and don’t forget to get your Duracell batteries because you’re going to need them. After all, no other batter last longer and Duracell batteries are the #1 trusted brand by parents when it comes to battery operated toys and accessories. So power up your robotic toys and your kids imagination with Duracell!