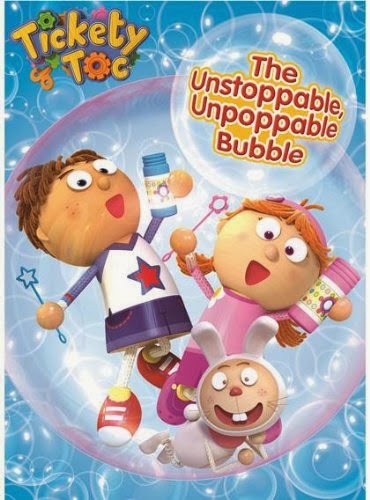 It’s time for another exciting adventure in Tickety Town with the DVD release of “The Unstoppable, Unpoppable Bubble”! The second brand-new Tickety Toc title from Anchor Bay Entertainment invites preschool fans coast-to-coast to “chime the time” along with comedic twins, Tommy and Tallulah, and all their adorable friends from the top-rated Nick Jr.® TV series from Zodiak Rights. Featuring a half dozen episodes bursting with adventure – plus a free Tickety Toc paint booklet to further the fun – the newest Tickety Toc DVD from Anchor Bay Entertainment is set to ”pop” at retail nationwide on January 7, 2014.

In the lead episode, “Bubble Time,” Tommy and Tallulah set out to test McCoggins’ new “unpoppable bubble” formula. But when a bubble becomes so big that it engulfs everything in its path, it’s up to helpful Hopperoo to save Tickety Town from a sticky situation!

The debut title also follows Tommy and Tallulah as they fly off in a hot air balloon – and can’t get down! – in “Balloon Time,” and zeros in on a “sticky” situation when the Stickety Machine used to find Pufferty’s ball nearly sucks up the entire Tickety Town in “Stickety Time”! Additional episodes on the new DVD include: “Help a Friend Time,” “Fruity Pudding Time,” and “Bell Time.”

Cedar’s Mediterranean Foods, Inc. was established in 1981 and has been a leader in the Mediterranean food industry for over 30 years. Its authenticity and expertise has allowed the company to nationally expand and flourish with its many product lines including All Natural hommus, pita chips, fresh salads, Greek yogurt based dips, and tzatziki. As one of the only major hommus manufacturers still privately owned, Cedar’s continually introduces new products and flavor profiles to help keep the industry fresh and consumers satisfied. Throughout its success, Cedar’s has focused on promoting healthy lifestyles through great tasting Mediterranean foods, as reflected in the recent Non-GMO Project Verification and Gluten Free Certifications of many of its product lines.

Zodiak Kids is the global independent leader in kids entertainment, combining Zodiak Media’s dedicated kids production companies, consumer products and sales division. Zodiak Kids encompassesprominent production companies Marathon Media and Tele Images Productions (France) and The Foundation (UK). Sales for Zodiak kids are handled by a dedicated team within Zodiak Rights, one of the leading international distributors in the industry.  All aspects of licensing are handled by a dedicated division with highly experienced teams based in London and Paris (Zodiak Kids CP London and Zodiak Kids CP Paris). Zodiak Kids boasts one of the largest, high-quality kids catalogues in the world, which includes Totally Spies!, the international hit animation series;  Tickety Toc, the new animated series; Waybuloo, the CBeebies pre-school hit; Redakai, a brand new series on Cartoon Network US; Mister Maker, the ultimate arts and craft show; Gormiti, based on the extraordinarily successful figurine range that sold over 100 million pieces; Street Football, one of the top rated animated shows in France and Italy and the newly launched The Ranch. www.zodiakkids.com

This is your chance to win your very own copy of Tickety Toc, The Unstoppable, Unpoppable Bubble making its way to DVD on January 7th. Giveaway will run for 2 weeks just in time for the release. Winner will be randomly selected by PunchTab and will have 48hrs to respond to the email sent. Failure to respond will mean forfeiting your prize and a new winner will be chosen. Good luck!