I participated in an Influencer Activation on behalf of Influence Central for Hasbro and Playskool. I received product samples and a party stipend to facilitate my review, as well as a promotional item to thank me for my participation. 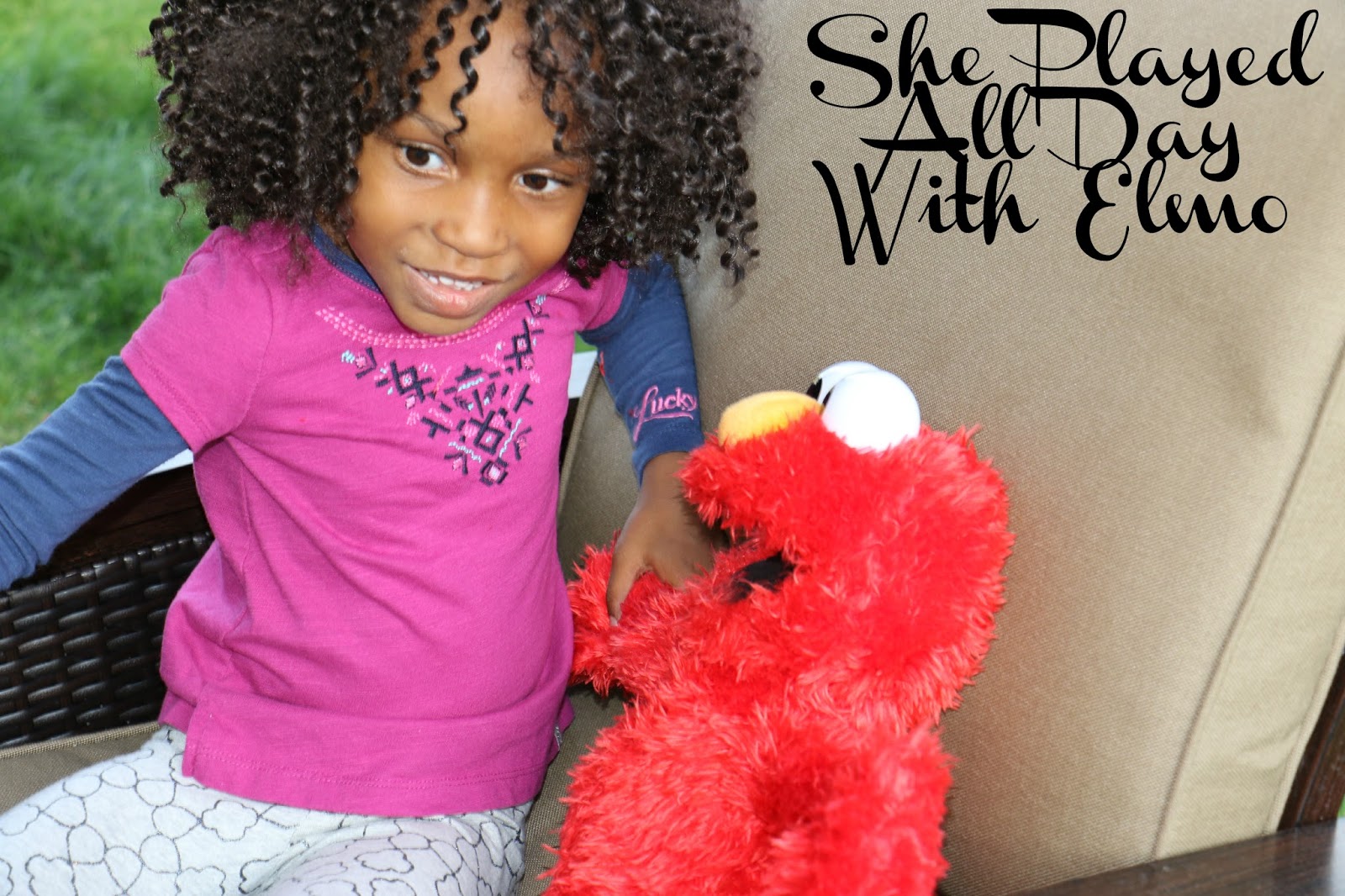 We recently hosted a Hasbro Play All Day Elmo party with a few of Madison’s friends and what a fun day it was. As you all know I don’t post pictures of other people’s children on blog for lots of different reasons, mostly for privacy reasons but I have no problems posting pictures of my own children. Madison had 5 of her friends over and I can tell you that they had a blast! The day started off as most parties would with kids arriving and then the noise began. However as soon as they saw the star of the party it got even louder. Now who was the star of the party? None other but Hasbro’s new and hottest toy of the holiday season Play All Day Elmo. 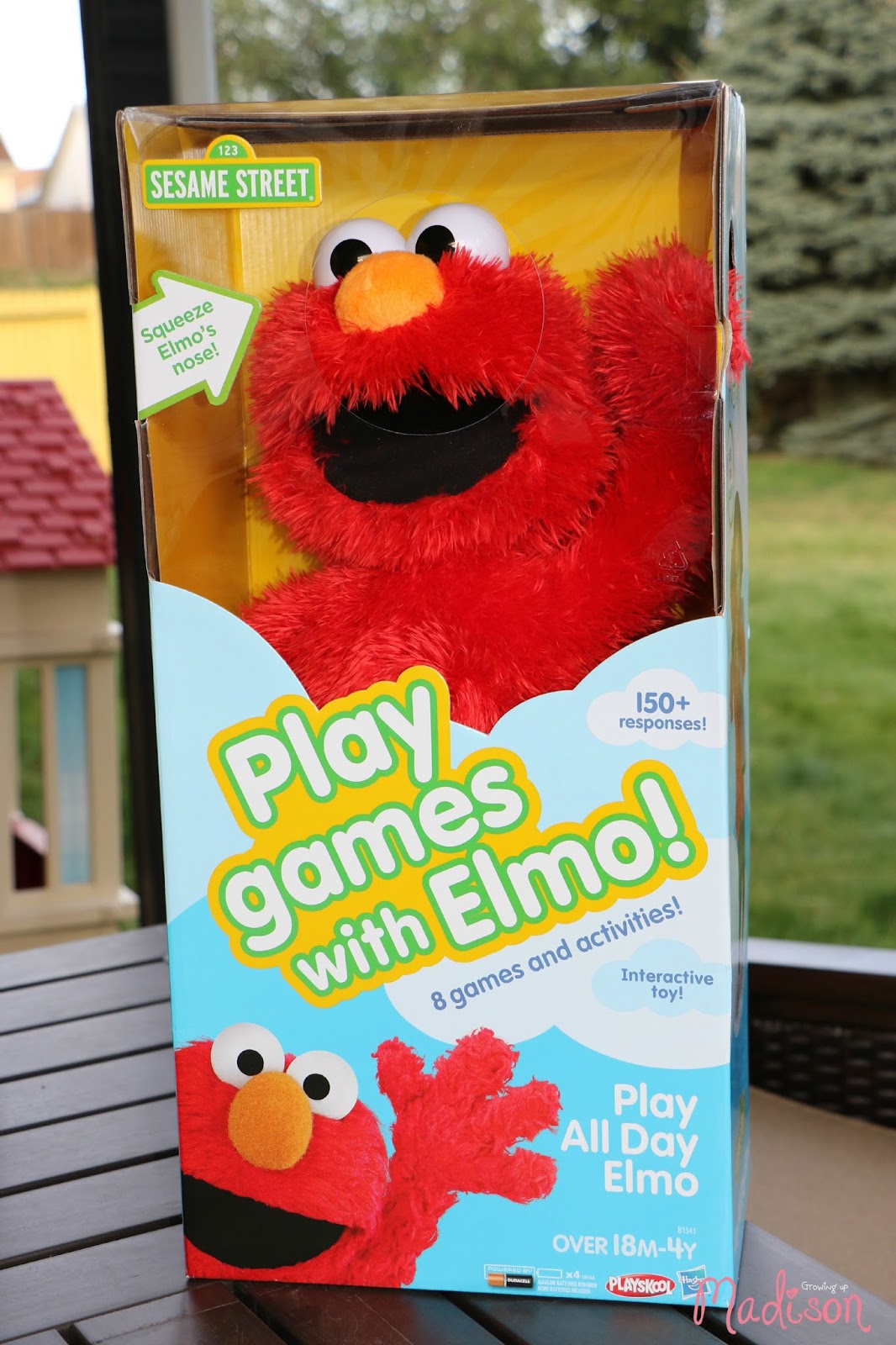 Hasbro didn’t disappoint with this new Elmo. Madison doesn’t know much about Sesame Street but she does however know Elmo and apparently so did all her friends. This Elmo is quite a step above all the others that have come and gone and I’ve had a lot since I also have a daughter who is 19 and she has one of the very first Tickle Me Elmo. This one was super easy to take out of the box so he was fun to play with right from the get go. What was different was that his battery compartment (and he does come with batteries) is at the top of his head instead of in his body like all the others. 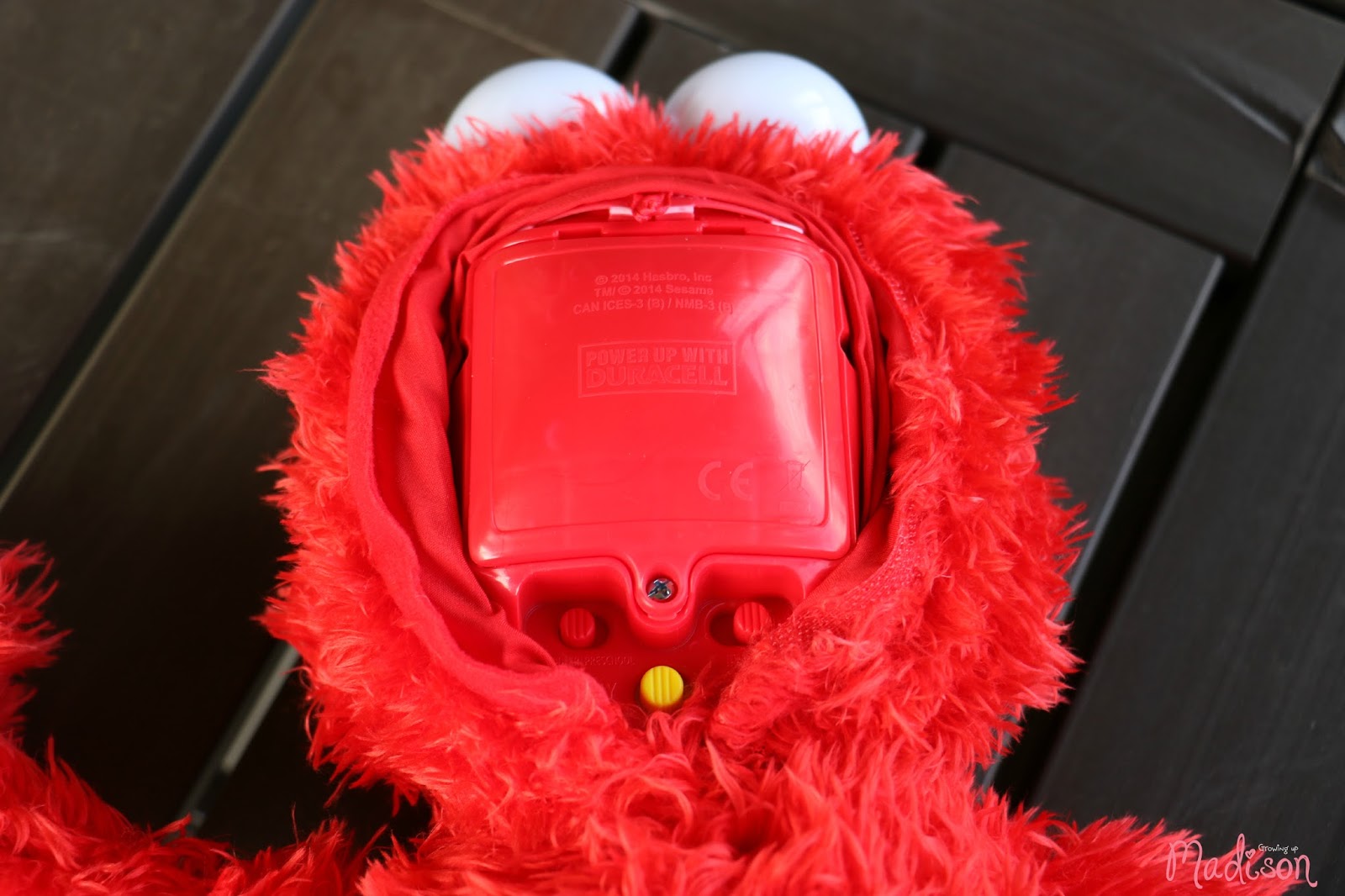 This Play All Day Elmo is one of the most interactive Elmo to date. He comes with 8 games that and activities and has over 150 responses that will keep your little one entertained and engaged. I have to say though that we didn’t get to hear all 150. One of our favorite feature is the 2 modes of play that he comes with. He comes with a Toddler and Pre-School mode so that your younger ones can enjoy him and so can the older ones as well. The pre-school mode was what we played with and he has games and activities that the kids enjoyed such as “Green Light Red Light” which was also one of the games that they played. Like all of the other Elmos’ when playtime was over he sings a lullaby which Madison wanted to sing along to as well. 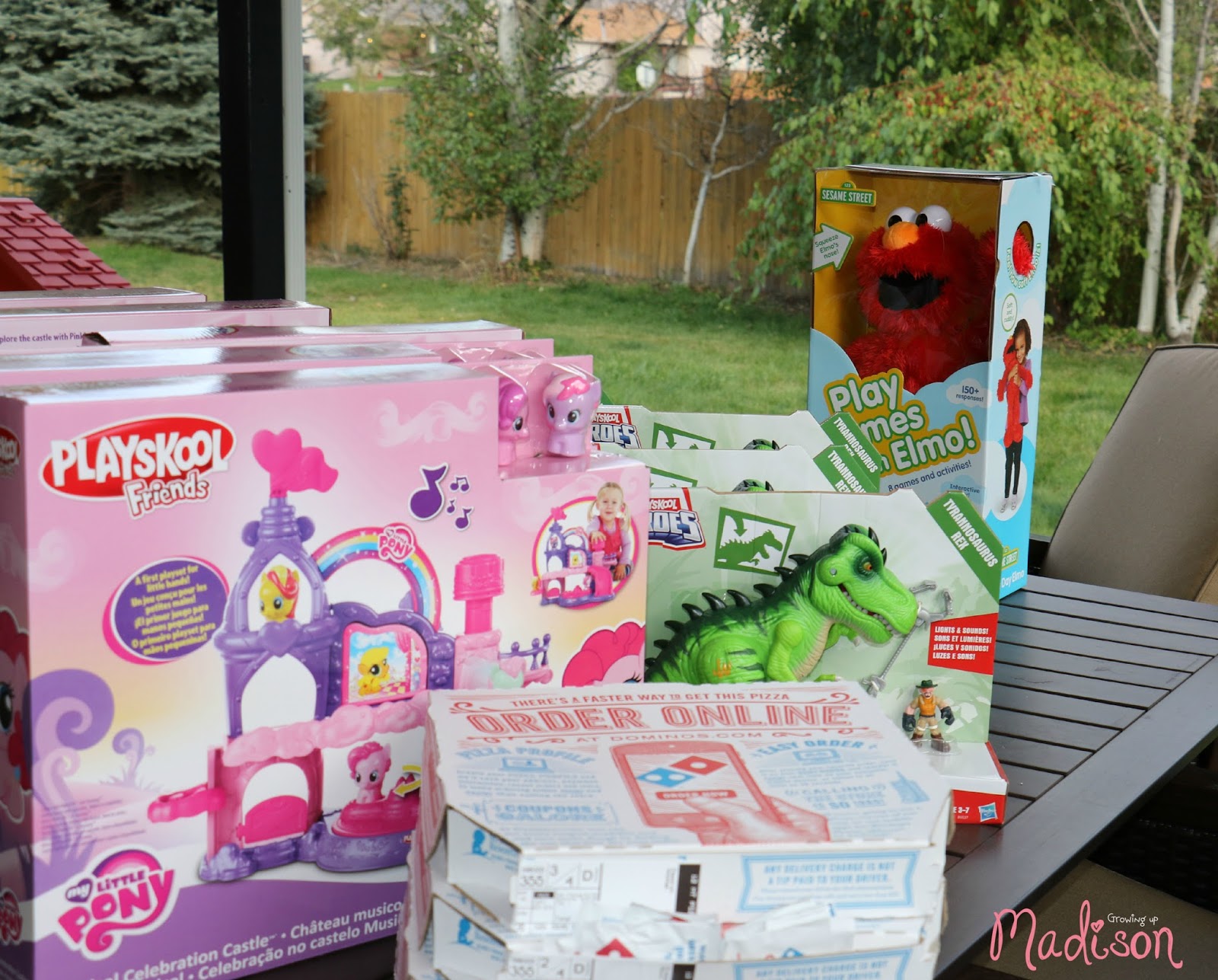 The kids sure had a blast and it wasn’t just because of the food but Hasbro surprised each child with a gift that they could take home. With Jurassic World being such a big hit this year both boys and girls got to take home a Jurassic World Tyrannosaurus Rex and a Playskool Friends Musical Celebration Castle Featuring My Little Pony. 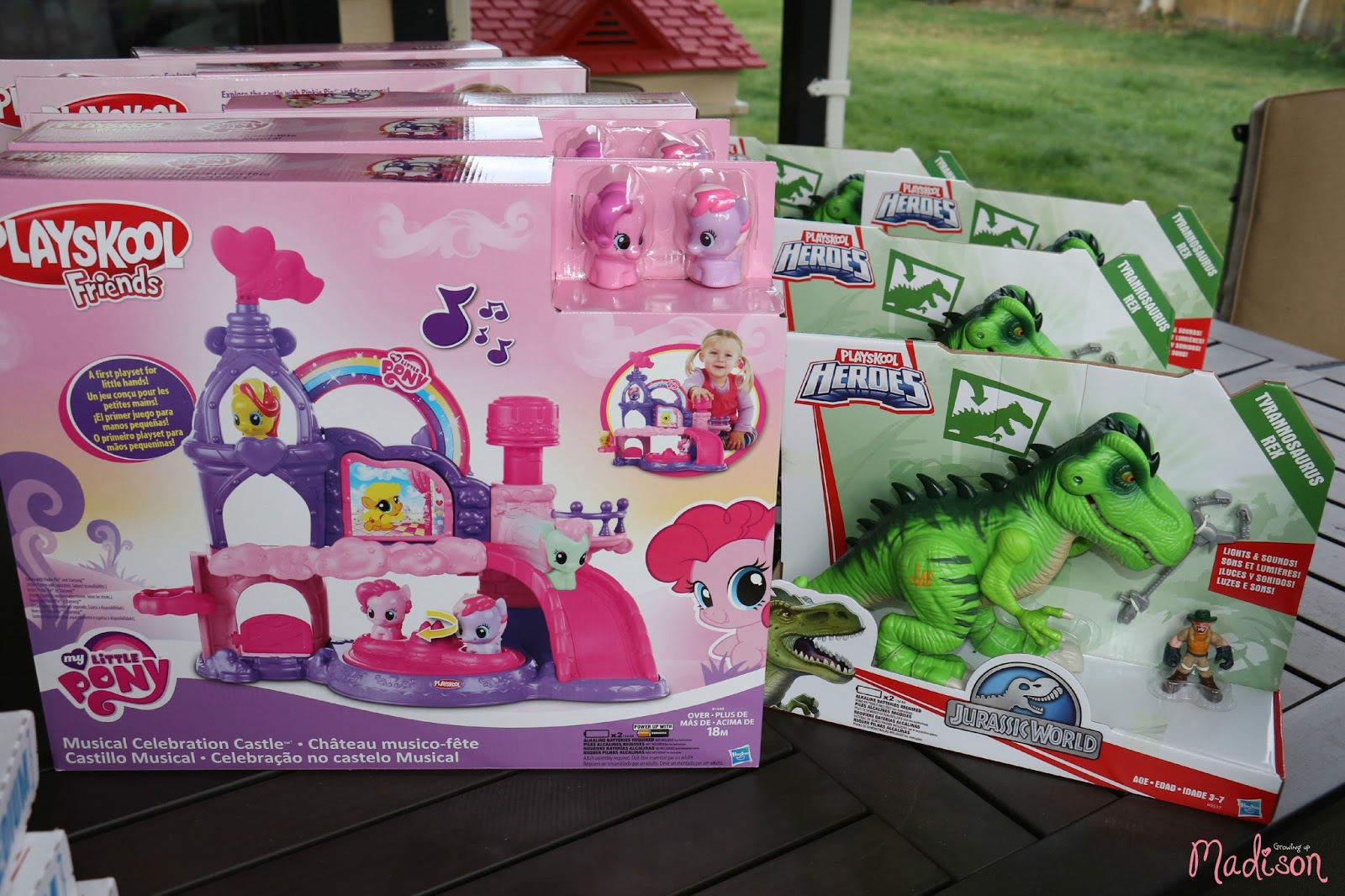 Both toys are phenomenal and make great gifts for Christmas. For all the My Little Pony fans you will love placing your ponies in the castle and watching them come to live with your imagination. It is very interactive and you can see the turret spin and play music.

The Jurassic World Tyrannosaurus Rex makes chomping sound and also comes with lights and sounds. You can pretend you’re capturing your very own dinosaur with the capture claw. Both toys are perfect for little hands to play with.

You can check out these and more toys available at Hasbro’s Toyshop. 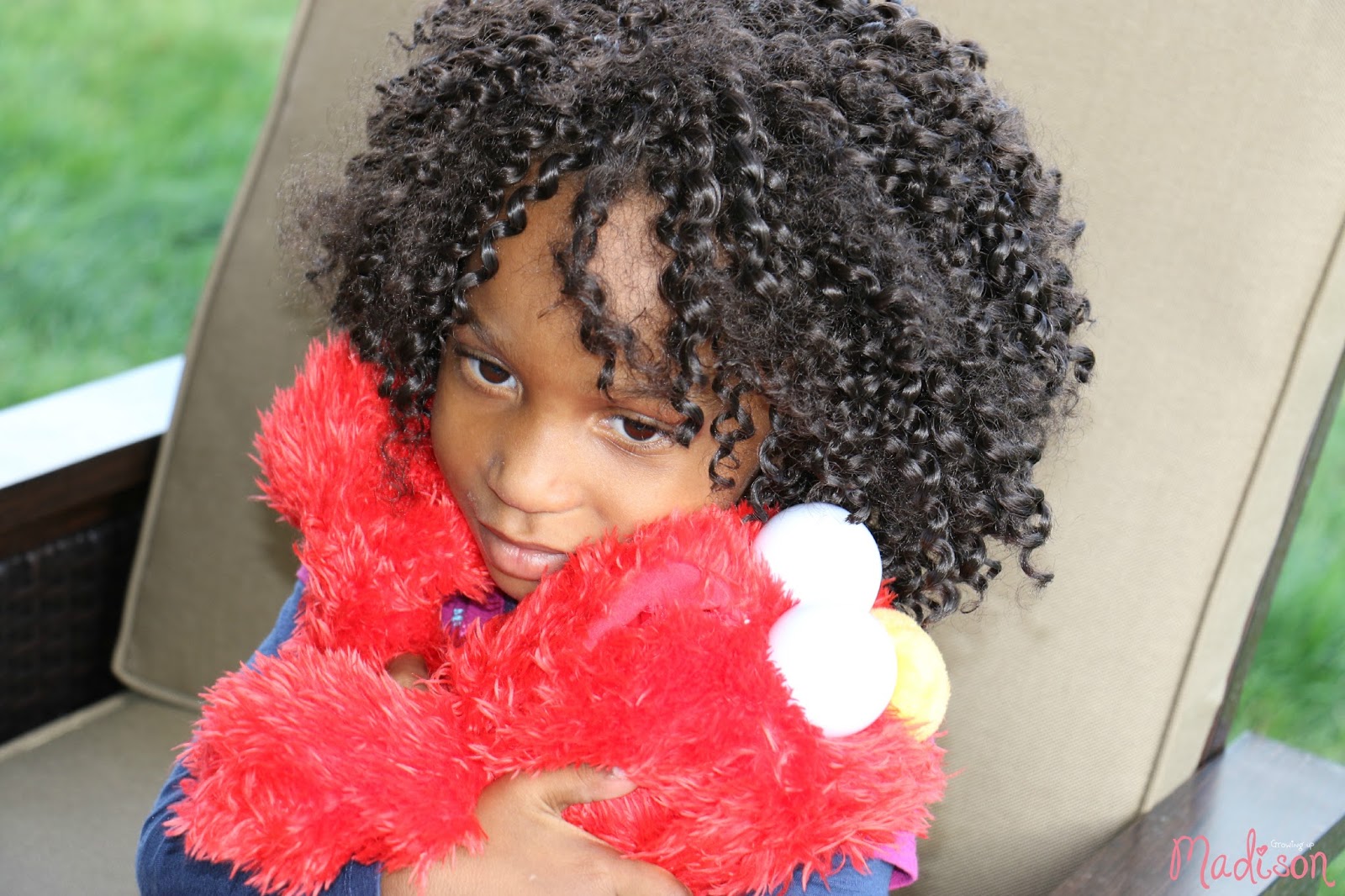 Overall the Hasbro Play All Day party was a success and Elmo I can guarantee you will be one of the top toys for the holidays. Don’t just take my word for it. He’s available in stores right now and you can demo him right from the box. You’ll love him as much as Madison does.

Here are the ways you can connect with Hasbro’s Playskool: