I am not ashamed to say it. I am actually quite proud of myself. Not ashamed and quite proud of what you’re wondering? Well let me get right to it. I was a breastfed baby and breastfed until I was thirteen months old. One of the things that helped me mommy said was having the right bottle, because I will admit it, I was also bottle fed. While I was breastfed exclusively for the first six weeks of my life, mommy had to return to work which meant that someone had to feed me. The easiest way to do that was by bottle and having the right bottle to transition from breast to bottle and back again really helped. Mommy and I are big advocates of breastfeeding, so when contacted by Munchkin to take a look at their brand new line of bottles called LATCH, without hesitation, mommy said “Let’s do this. Let’s help another new or not so new mommy, find the right bottle to help with that transition with her new, or not so new, baby”. 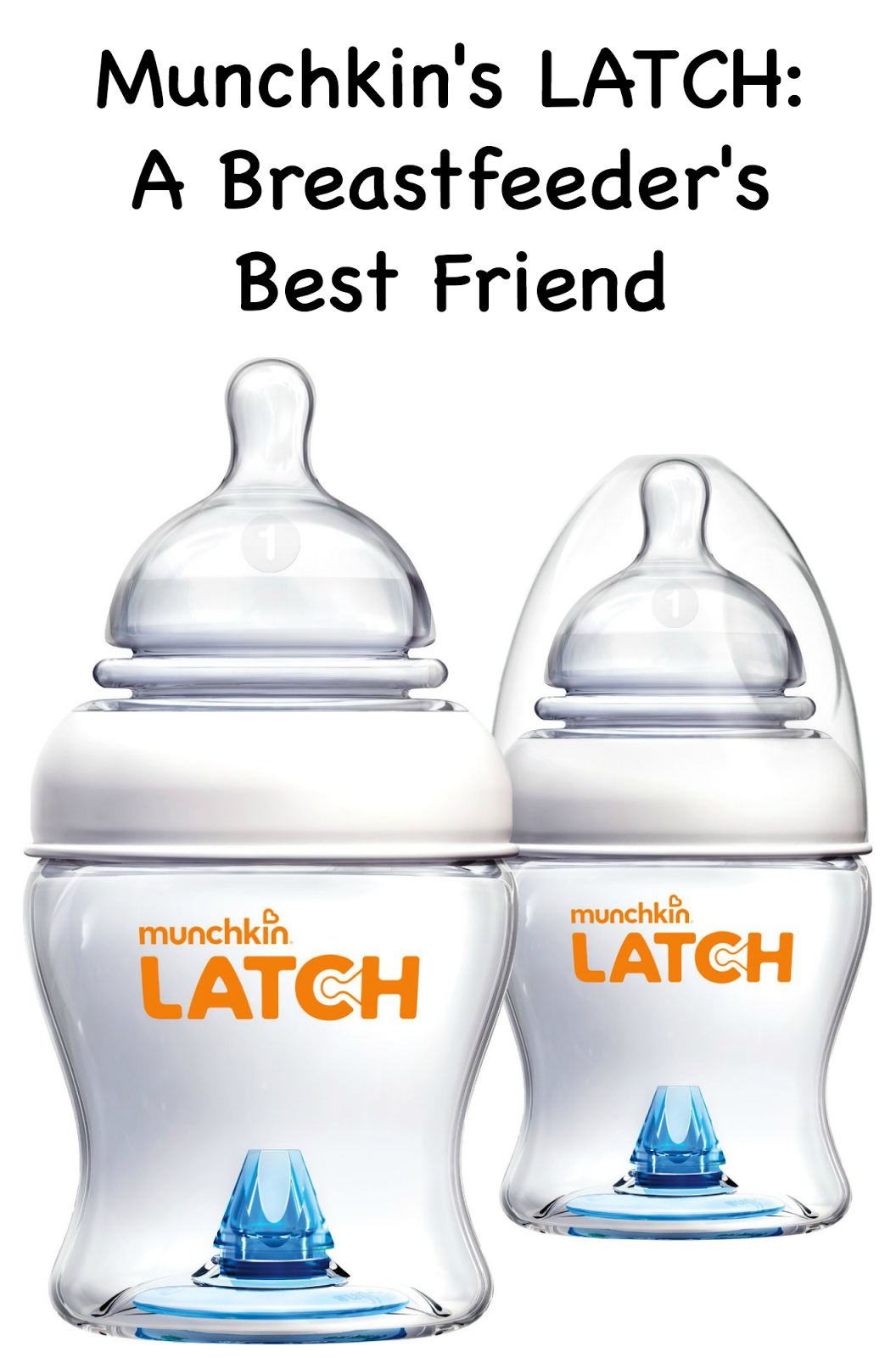 Mommy and I were sent the 4oz and the 8oz size bottles. LATCH is a brand new bottle designed with an accordion-style nipple which moves, pumps and stretches like the breast. 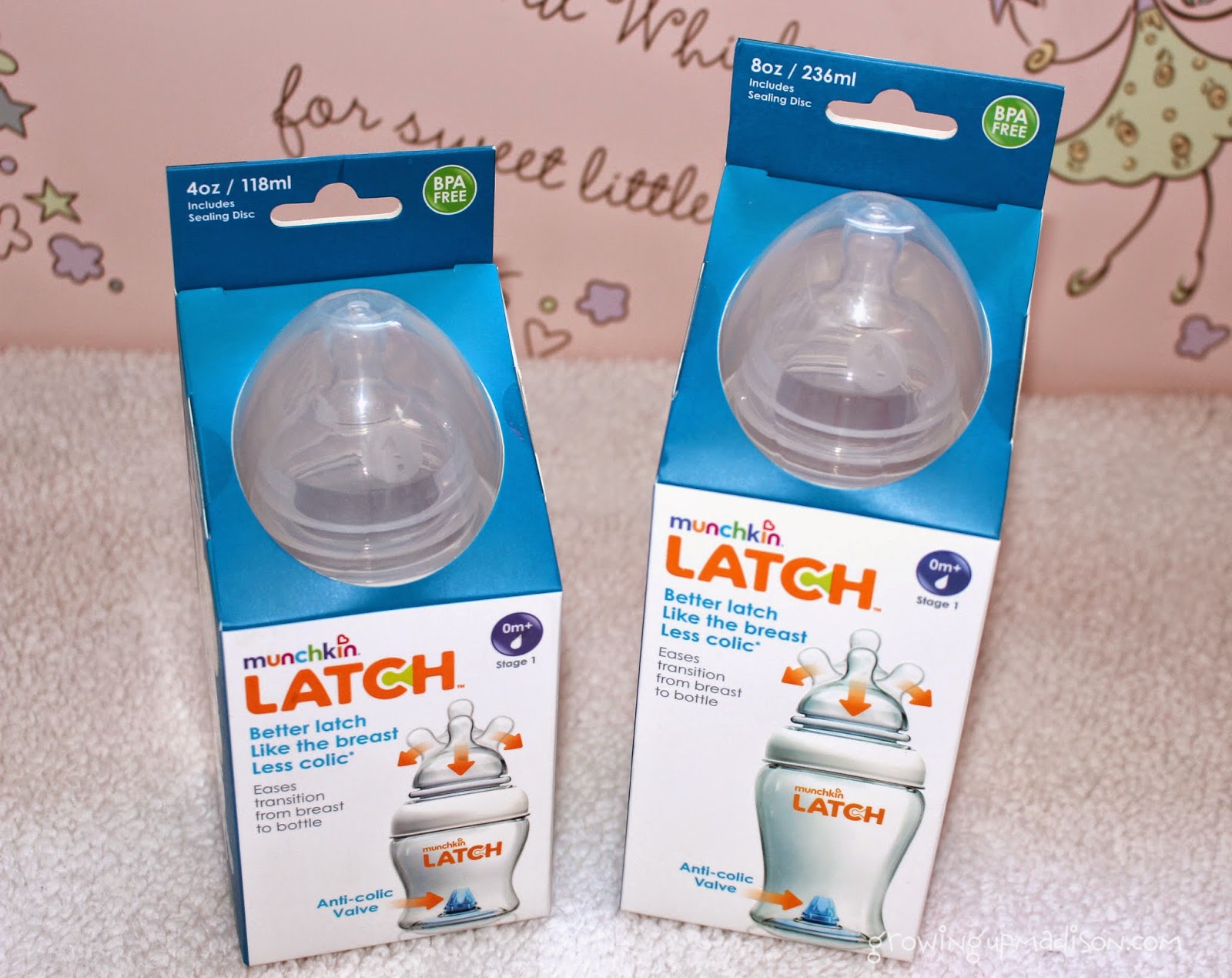 Upon opening the package the LATCH looks like any other bottle with the standard 4 pieces. The bottle, nipple, ring and cover. Upon closer inspection though you notice that there’s something a little extra that’s included inside of the bottle. That’s an anti-colic valve and I’ll explain that a little with a description and a video of how it works. Moms know that having a baby who has colic (luckily I never had colic) can be a nightmare, so that valve will definitely be a lifesaver for many. 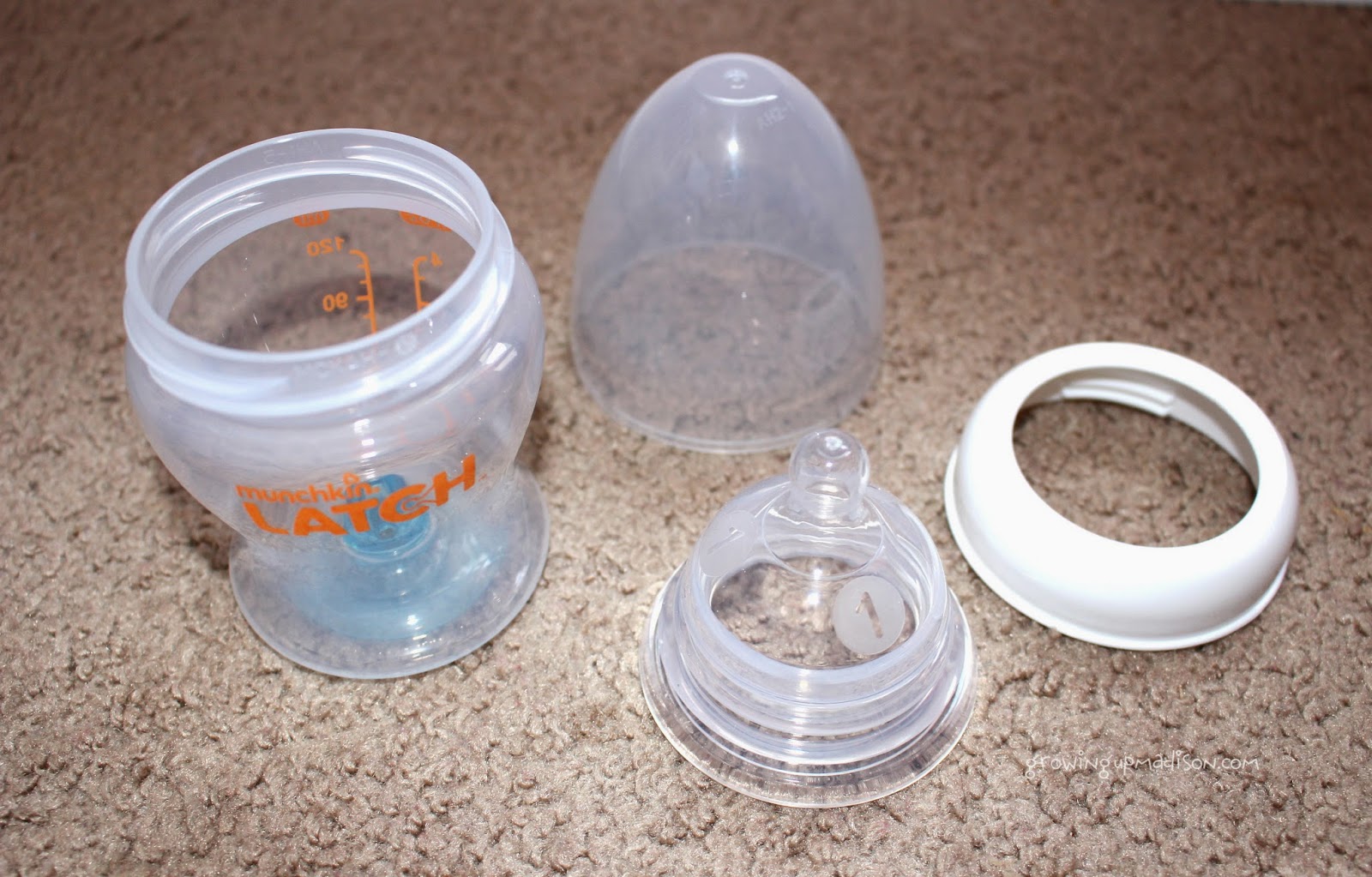 That anti colic valve is totally removable to make for easy cleaning. Lets face it! You want a bottle that not only cleans easy but will be hygienic as well.  But what about leakage? So obviously mommy and I put this bottle to the test. We filled it with water and shook and shook and shook. No water came out except for the little drips that would come out from the size 1 nipple. You certainly want that slow drip when feeding a newborn. You don’t want to go too fast so that he/she will choke. 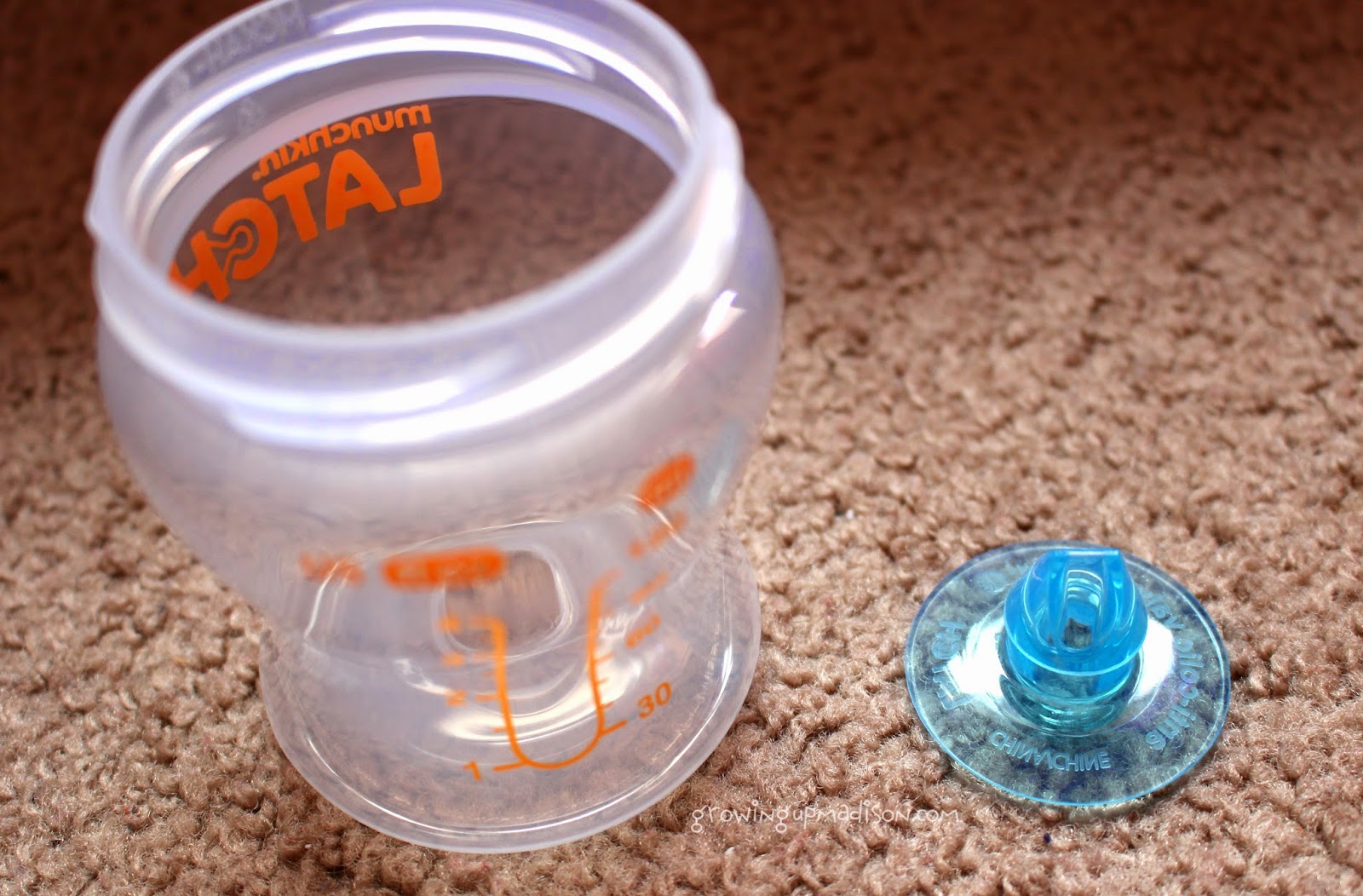 Now the three key features which the LATCH boasts which aid in the transition from breast to bottle and back are: 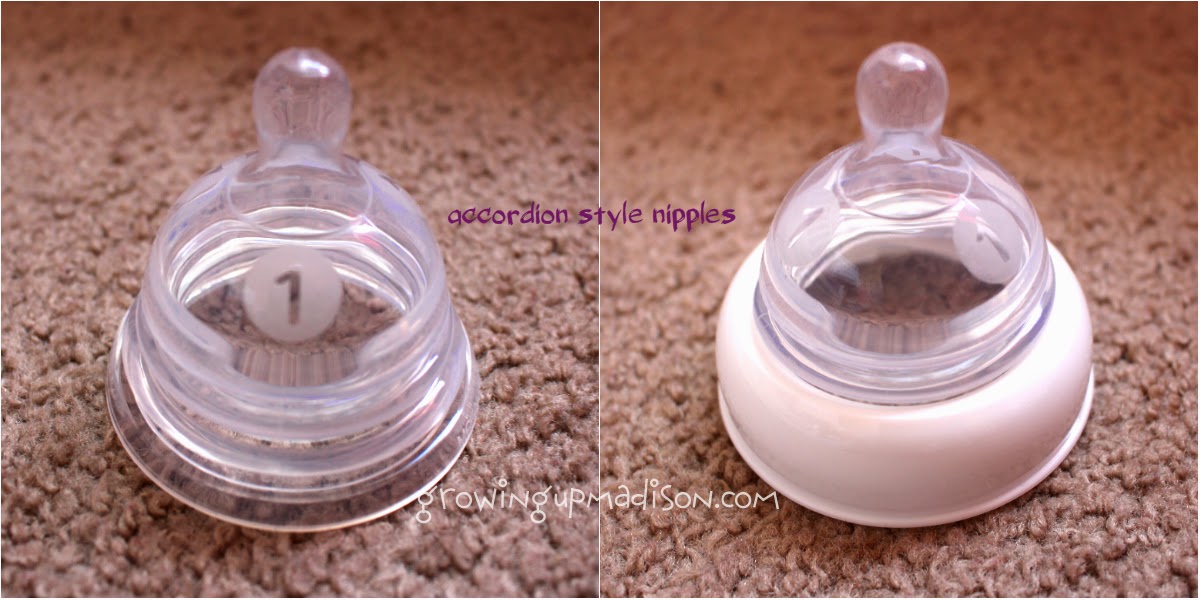 See how the LATCH Nipple Stretches:

See how the LATCH Nipple Pumps: 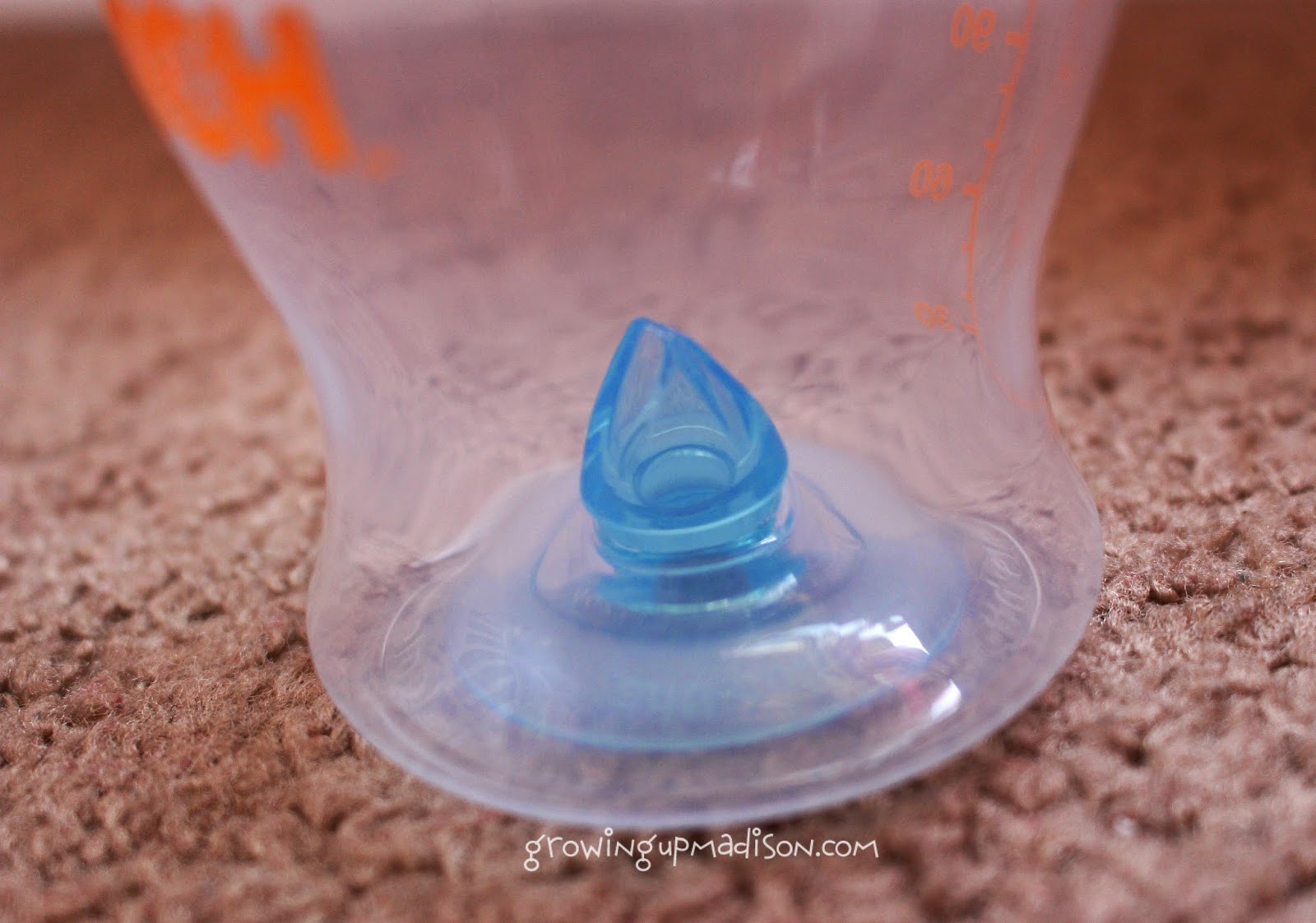 I have to give props where they are due and say that these LATCH bottles have been one of the best that I have seen in quite a long time. We love the easy to clean feature, the accordion style nipples but that anti-colic valve was what won us over. These bottles definitely get my TWO TINY THUMBS UP!

The Munchkin LATCH bottles are currently available in both the 4oz and 8oz sizes and can be purchased online at Amazon.com.

You can connect with Munchkin’s LATCH via: