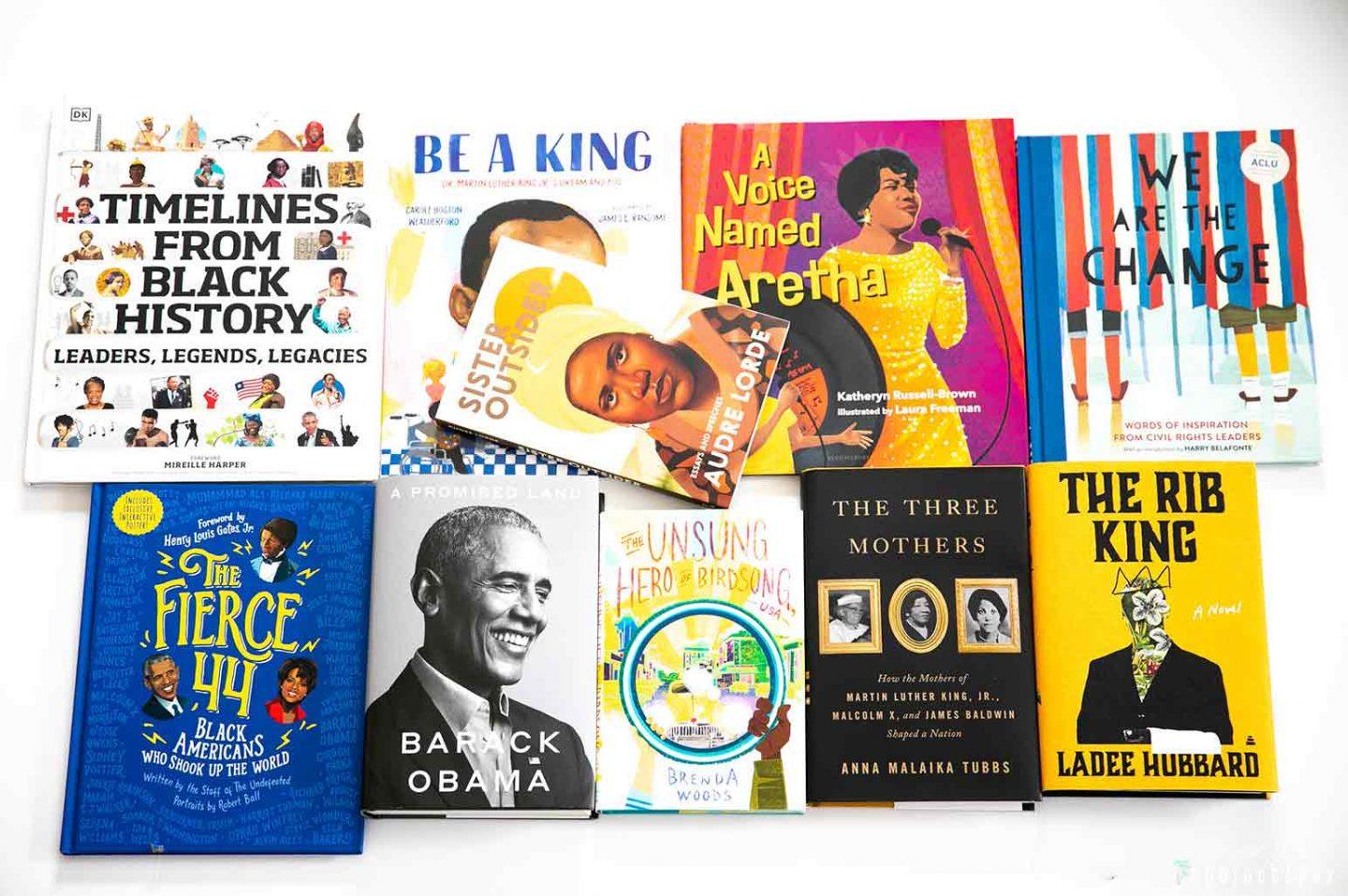 Documentaries about Black history are great, but it’s not the only source of education available out there. Books provide a fundamental amount of information about what African Americans have gone through over the centuries, and what they continue to struggle with within modern times. The books about Black History on this list are not only major page-turners but they offer readers a chance to educate themselves and embrace a community that has strived to survive in the face of great adversity.

Check out these books about Black History you need in your family’s bookcase and books you need to read right now.

1. The Fierce 44: Black Americans Who Shook Up the World

Take celebrating Black History Month to a whole new level by introducing kids to “The Fierce 44: Black Americans Who Shook Up the World.” Within these pages, readers will get some amazing biographical insight on 44 of the biggest Black influencers in history like Barack Obama, Aretha Franklin, and Serena Williams to name a few. This biographical collection teaches kids about the many groundbreaking things that African Americans have done for society. It will also inspire kids to contribute to their community in their own way as they grow up. Who knows? Maybe someone will write a book about them.

2. The Unsung Hero of Birdsong, USA

Looking for an inspirational book about friendship in a time full of racism? Then check out “The Unsung Hero of Birdsong, USA.” The book is about Meriwether Hunter, a black WWII veteran who returns to town in 1946 and saves a white boy named Gabriel after a bike accident. Gabriel’s dad is so grateful, that he offers Meriwether a job at his garage. And soon, a friendship between Meriwether and Gabriel begins to form.

Want to learn more about Barack Obama? Then why not read about it directly from the man himself? “A Promised Land” provides a personal account written by the former US president himself. In the book, readers are introduced to what Obama went through as a man of color searching for his own unique identity. The description of how his political education came to be and what his first term as president was like will make readers feel a whole lot closer to the man who made us truly embrace democracy. Most people don’t even realize that there are limits to being a president, but this book shares some of the trials and tribulations that come with being in office. This includes clashes he’s had over war strategy with US generals as well as his great efforts to bring affordable healthcare to the US. It even comes in an audiobook read by the big man himself.

Who would have imagined that Aretha Franklin, aka the Queen of Soul and Civil Rights activist, used to be shy as a kid? Well, in “A Voice Named Aretha,” children get to learn how Franklin struggled with her introverted personality and how she climbed her way towards music stardom in a time where success for Black people was difficult to attain.

Written in poetic form, “Be a King: Dr. Martin Luther King Jr.’s Dream and You” focuses on Dr. Martin Luther King Jr.’s major moments, while also inspiring young readers to embrace who he was, his beliefs, and his contributions. Kids will also be introduced to a group of students who start a school project based on Dr. King. Along the way they’ll learn of the ways that he kept hope alive in the face of great adversity and how he never gave up on a dream where equality of everyone would become a reality. It’s an excellent way to teach kids about the ongoing struggles of the civil rights movements and how everyone can play a role in change.

From the mind of Audre Lorde, a feminist writer, mother, and most importantly, a Black woman, comes “Sister Outsider: Essays and Speeches.” This book is a selection of essays and speeches that tackle heavy subjects like racism and ageism among other things. She delves into hard topics such as violence against women, police brutality, and the white patriarchal society of the United States. And while the words in the pages of this book reflect the struggle that people today continue to face, it also provides a sense of hope in an otherwise dark and often hurtful world.

“The Rib King” is a historical novel about August Sitwell and a group of other Black folks, who like himself were taken from an orphanage and raised to work for a privileged white family called the Barclays. But when the Barclays suffer financial problems, they decide to sell a rib sauce made by Miss Mamie, the household cook, using “The Rib King” as a brand. But August and Miss Mamie soon realize that the Barclays have no intention of sharing the wealth with them, which leads to a build-up of emotions in August that has dire consequences. “The Rib King” gives readers an insight into how white people have exploited Black people over the years for their personal gain.

8. The Three Mothers: How the Mothers of Martin Luther King, Jr., Malcolm X, and James Baldwin Shaped a Nation

Most children (and sadly, most adults) have limited knowledge of the various Black people who have made some major contributions over the years. But “Timelines from Black History: Leaders, Legends, Legacies,” shines a spotlight on civil rights activists, scientists, and Black leaders who have been forgotten by time. And thanks to the visual illustrations in this book, children will be eager to learn more about the roles these historical Black figures played not just in America but in other parts of the world too like Europe, Africa, and the Caribbean. The timeline of this book will take kids all the way back from pre-colonial Africa all the way to the Black Lives Matter movement of today. The book was written and designed by people of various cultures, beliefs, and walks of life, and their distinctiveness is reflected on every page from beginning to end.

10. We Are the Change: Words of Inspiration from Civil Rights Leaders

These are trying times, especially now that children need some words of inspiration during the fight towards equality. It’s why the book, “We Are the Change: Words of Inspiration from Civil Rights Leaders” is such a major asset in your family bookcase. This book contains a collection of words from Civil Rights leaders like Dr. Martin Luther King, Maya Angelou, and Eleanor Roosevelt that are oh-so inspiring. In them, kids will find the perfect role models to follow.

Add one, two, or all of these books to your family’s bookshelf while you continue to honor Black History Month.