Are you afraid of spiders? I really can’t say that I am. I grew up where there was always a tiny spider of some sort walking around. My kids on the other hand are deathly afraid of anything with more legs than they do with the exception of dogs and cats. Madison would refuse to go to the door or her bathroom and would scream like someone is killing her, if she sees a moth. Even my boys would jump 100ft into the air if they could jump that high, if they saw a spider or any other bug. Surprisingly when we got the opportunity to try out a few Moose Toys, the one thing that my 10yr old said that he wanted was the Wild Pets Spider Habitat Playset. Go figure! 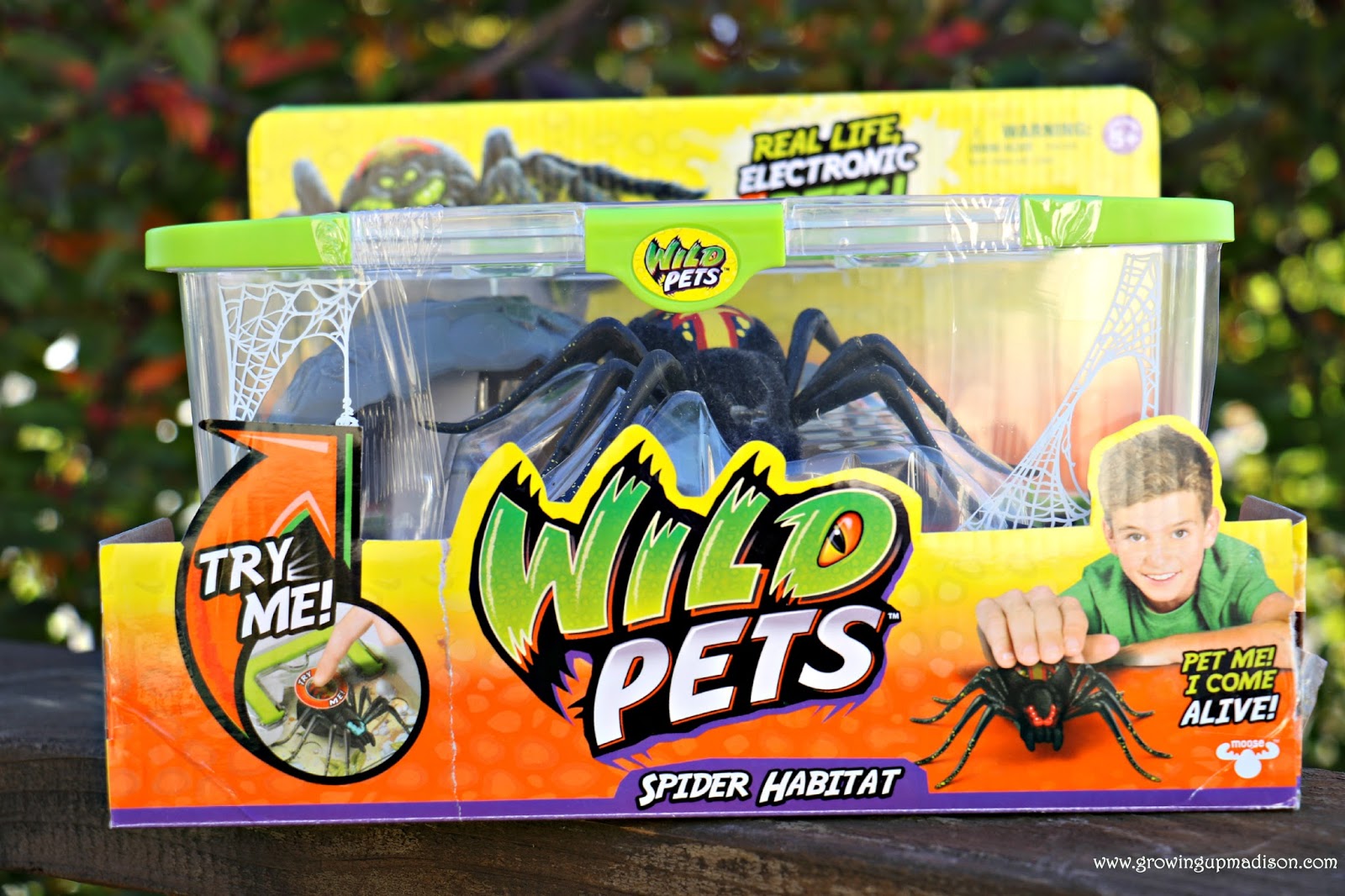 Unboxing was really easy and there was no scissors needed. They get a definite plus from me for that. I hate boxes where it seems like you need the special forces to open it for you. Battery is already installed (3 button cell batteries) so it’s ready for play once it’s out of the packaging. 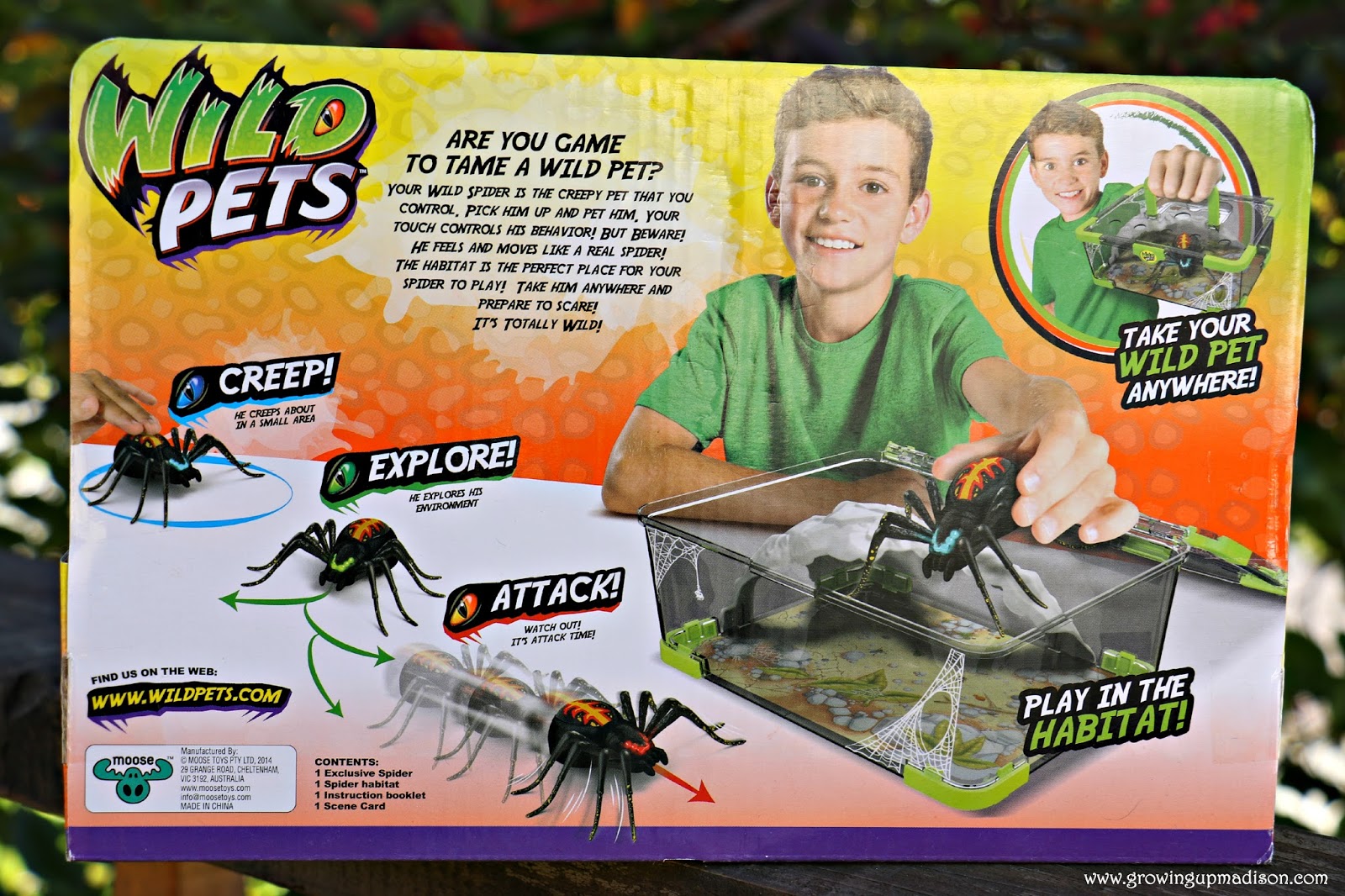 I can totally see the fascination with the Wild Pets Spider Habitat Playset. While it may look scary it its totally tame and you can actually pet it? Pet a spider you ask? Well yes you can. The fur on his body actually may feel like petting a tarantula and his little rubber legs move about so quickly that it does look like him scurrying around. This spider comes with touch sensors on his back and three settings. He also comes with his habitat that includes a carrying handle so that you can easily carry him from room to room or even to your friends house. 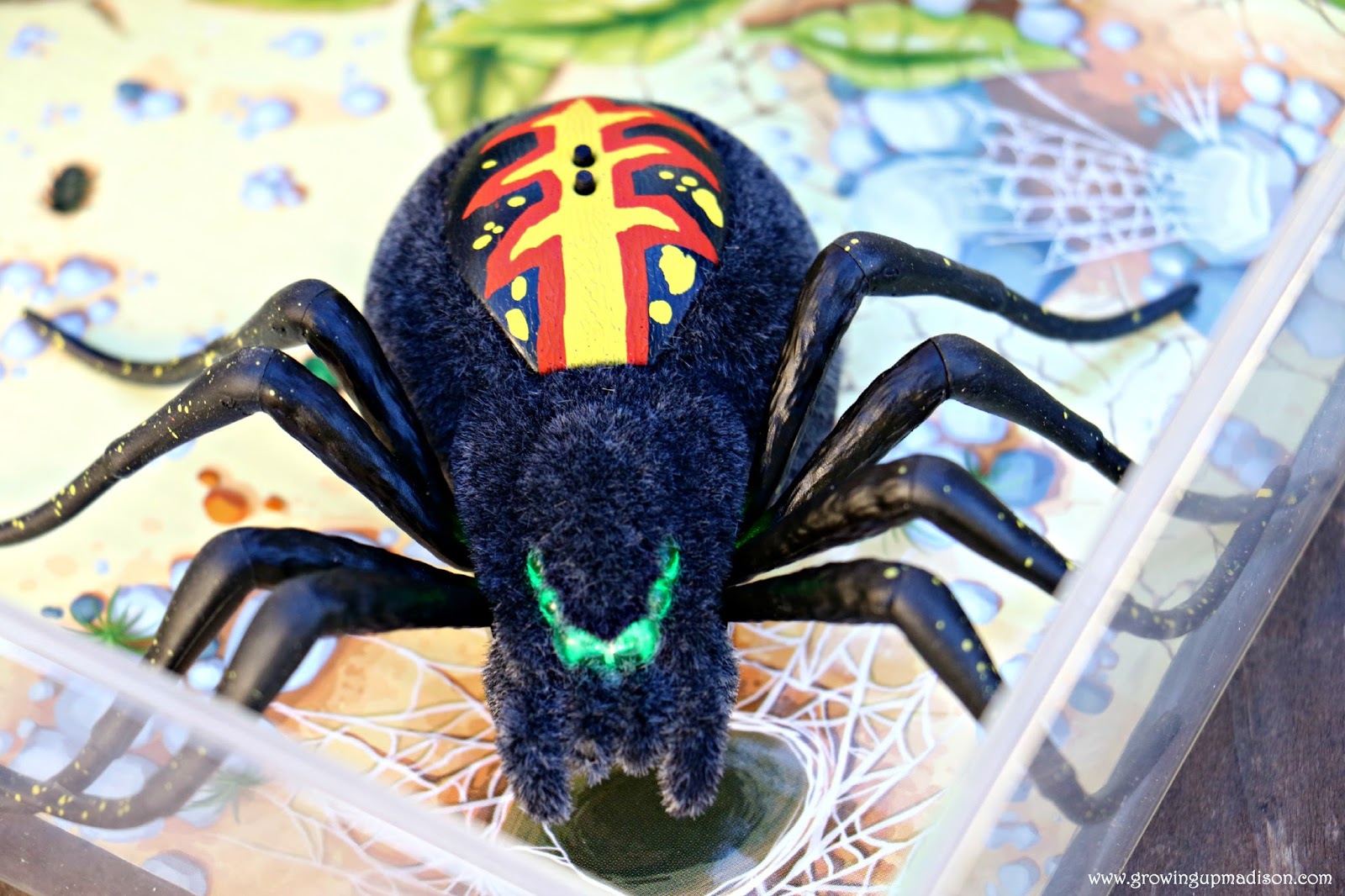 Now there are 3 modes with which you can play with him using the touch sensors on his back. Yes those 2 little buttons that you see in the photo. That’s the way that you control him. In the green eyed mode he will explore around wherever he’s put. His habitat is pretty small so I would suggest putting him in a more open area so you can really see him go. 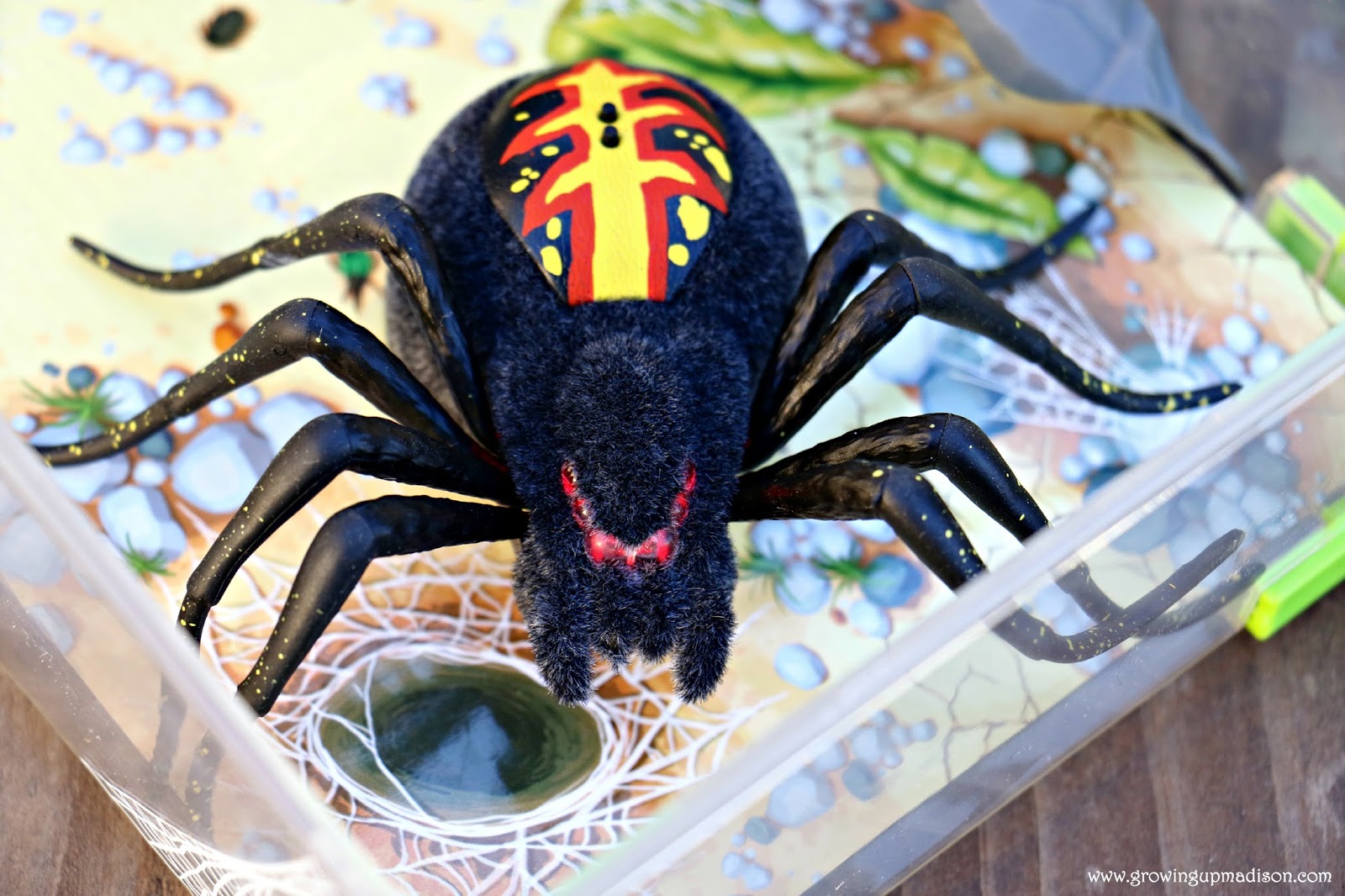 Red eyed mode is his attack mode. When you think of red you automatically think danger. You have to press and hold his sensor for him to go into this mode. You have to put him in the direction that you want him to go and he goes in a straight line. We set him up to attack our cat Kitty and I have to say that she wasn’t amused in the slightest. 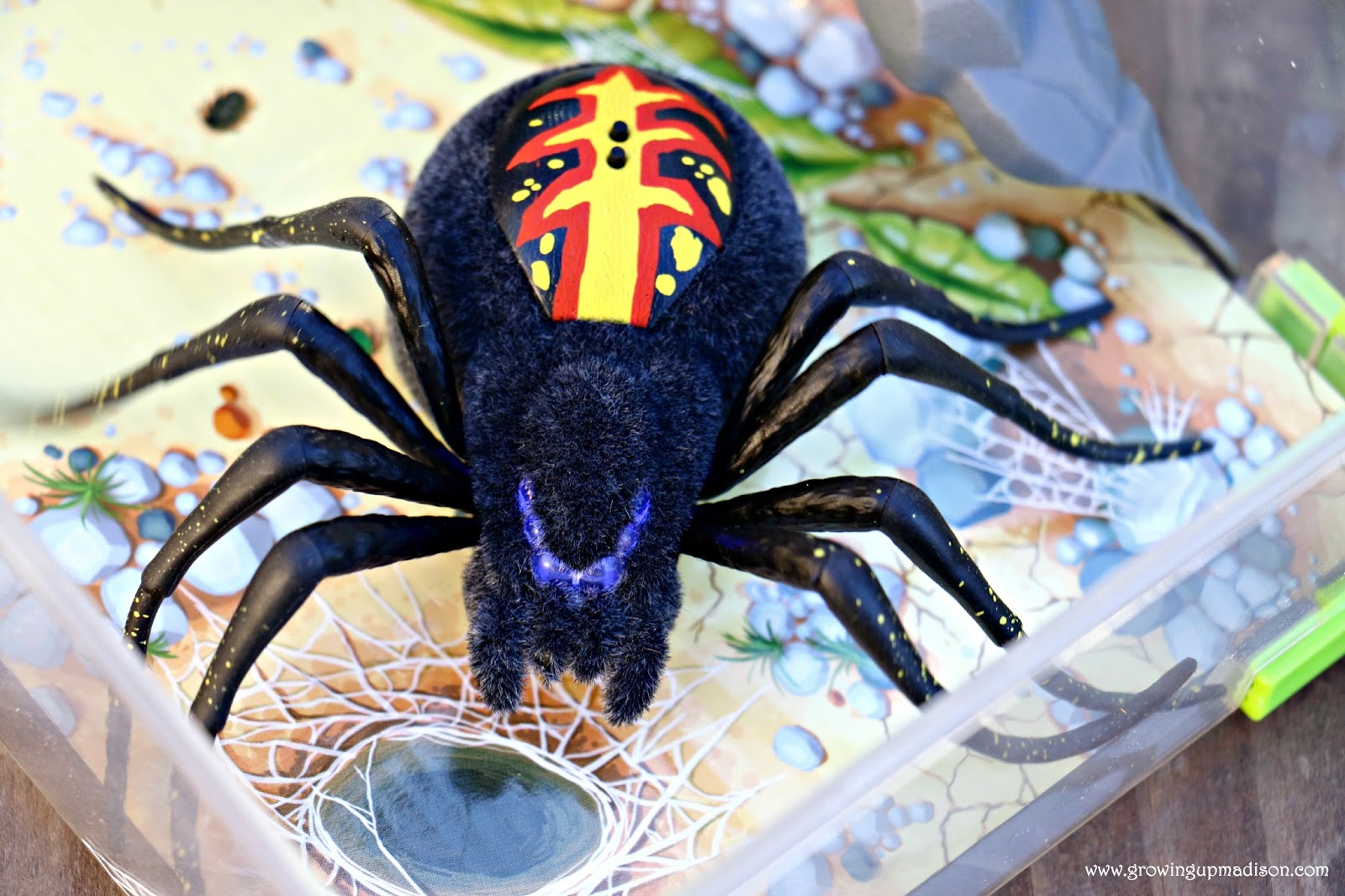 Blue eyed mode is the creep mode and this is preferable in the cage since he just moves around quietly as if exploring.

This is totally the “pet” that your kids would love to tame, and if they have been begging for a spider, how about giving them this one! The Wild Pets Spider Habitat comes with 1 tank, 1 spider, the instruction booklet and batteries included. It totally gets Mikaels Big Thumbs Up!

Just check out Mikael playing along with his spider.

The Wild Pets Spider Habitat Playset is available for sale at most major toy retailers.

So let’s discuss: What are you most afraid of?

Here are the ways to connect with Moose Toys: