If you remember a couple of months ago mommy and I decided that I was going to learn a new language. We decided that we were going to learn the language of love, or French as most people know it as. It’s been told that learning a second language is beneficial and that little ones learn languages a lot faster and easier than older kids. I must say that might just be true. While I may not be able to actually speak the language, I can’t really speak English much either, I do know quite a few French words. They actually make sense to me and I can actually follow simple directions in French as well.

When mommy and I were sent Whistlefritz’s Cha,Cha,Cha French Learning Songs CDwe couldn’t wait to play it. After all what’s better than speaking the language? Did you say singing? You bet it is! 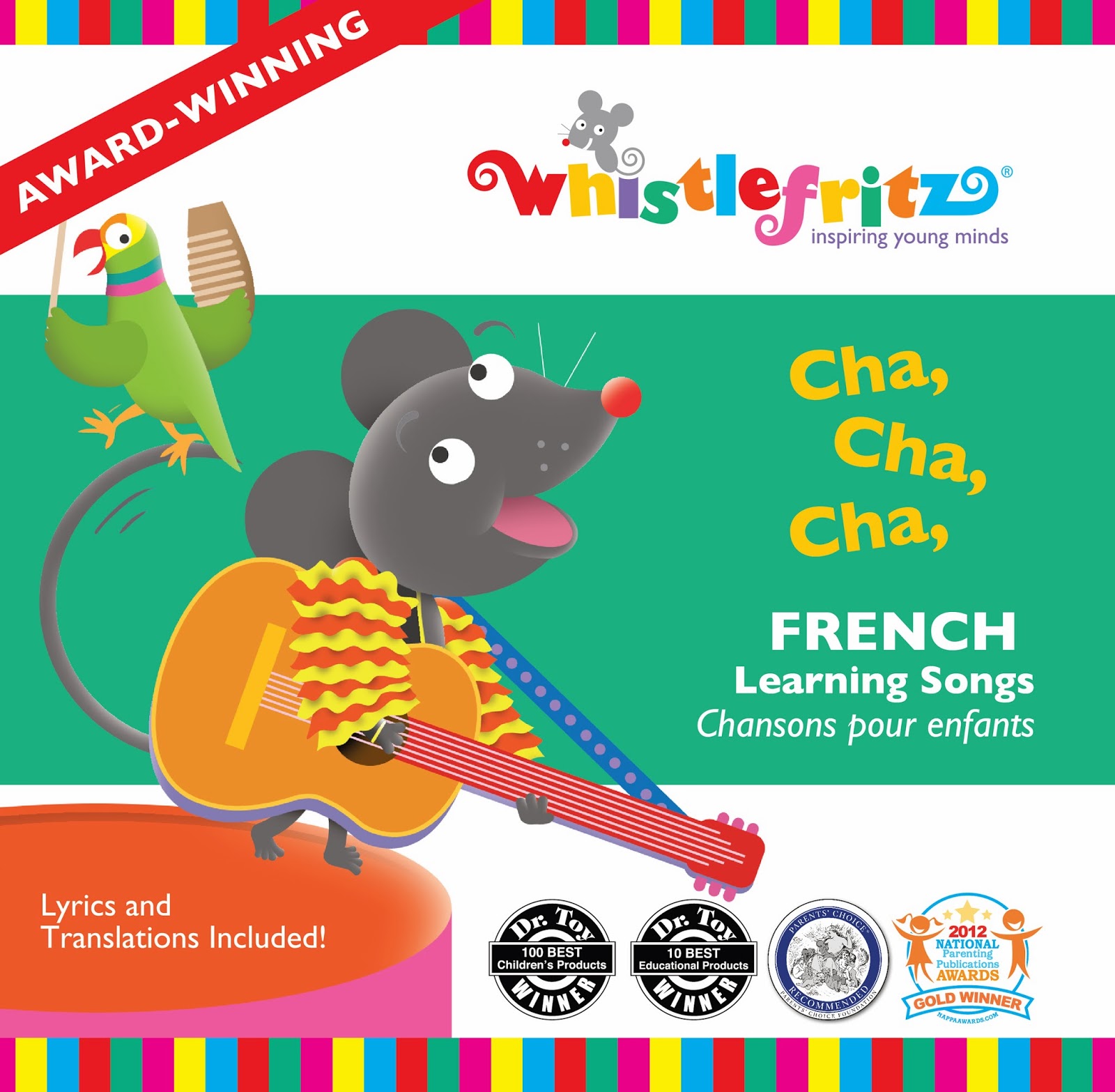 Parlez-vous cha, cha, cha?  From samba and merengue to rumba and reggae, irresistible world music rhythms add an exciting twist to learning French with this festive 15-song collection from Whistlefritz, the award-winning producers of language immersion CDs and DVDs for children. Performed by acclaimed singer Lynn Véronneau and set to a diverse array of Latin and Caribbean rhythms by versatile bandleader and composer Didier Prossaird, Cha, Cha, Cha will get children on their feet singing and dancing along to playful arrangements of beloved traditional songs (Bingo, Sur le Pont D’Avignon, Les Éléphants, Tombe La Pluie), as well as lively originals that teach about numbers, the days of the week, the months, the seasons, and more. This fun collection makes learning to speak French as easy and natural as un, deux, trois. A song-by song translation guide is included as an easy reference guide for parents and teachers.

Parlez-vous Français? Whistlefritz makes it so easy to learn the language. The CD comes with 15 very upbeat French songs ranging from rhumba to reggae, samba and meringue. All done to have you dancing while learning. The great thing about is that it also comes with a really nice English translation booklet in the jewel case, for those who may not know any French at all. What better way to learn than the basics. B-I-N-G-O, The Numbers song (Les Nombres) is probably my favorite along with On The Bridge of Avignon (Sur Le Pont D’avignon). Mommy actually knew On the Bridge of Avignon and sang along, although not quite as nice as the CD.

Each song teaches something in particular. The Numbers Song teaches the numbers in French. On the Bridge on Avignon teaches about people such as police officers (les policiers), musicians (les musiciens) etc. Now mommy and I can call these people by their correct French name and you will too. You can download a copy of your own booklet here and learn right along with me.

Now these are the tracks available and you can take a listen to samples of the songs here.

Whistlefritz also sent me their Spanish for Kids Adentro y Afuera (Inside and Out) which mommy and I plan on reviewing as well. Keep an eye out for it. Spanish comes a very close second for me but I’m so in love with French.  You can take a look at all their other products right here.

There are even tips for parents wanting to help their children with language immersion. How awesome is Whistlefritz?! They are so great that they’ve also won quite a few awards. You’re certainly getting an award winning product! I definitely recommend Whistlefritz and their Cha,Cha,Cha CD certainly gets my Two Tiny Thumbs Up!

I received one or more of the products mentioned above for free using Tomoson.com. Regardless, I only recommend products or services I use personally and believe will be good for my readers.