We were recently invited to a Toyota Safety Sense (TSS) event to learn all about how Toyota is making it safer for drivers in all of their new vehicles.

I have to admit that I’m a little biased. My very first car was a Toyota Corolla, so I would always have a love for Toyota. After all, you never forget your first love. Not only was the event a blast, because I got to learn so much about how Toyota has truly upped their game, I also got to test drive the brand new 2017 Toyota Avalon Hybrid.

Toyota recognizes that everyone deserves to be safe on the road, so they’ve designed their vehicles with Toyota Safety Sense to not only protect their drivers, passengers, and pedestrians but also from drivers in other vehicles. They also believe that these safety features should be standard, so that’s what you’ll also receive in any of the new 2017 and beyond vehicles. It’s no longer an optional feature. Yay for Toyota! The Toyota Safety Sense features help address three key areas of accident protection: mitigating or preventing frontal collisions, helping to keep drivers within their lane, and enhancing road safety during nighttime driving. 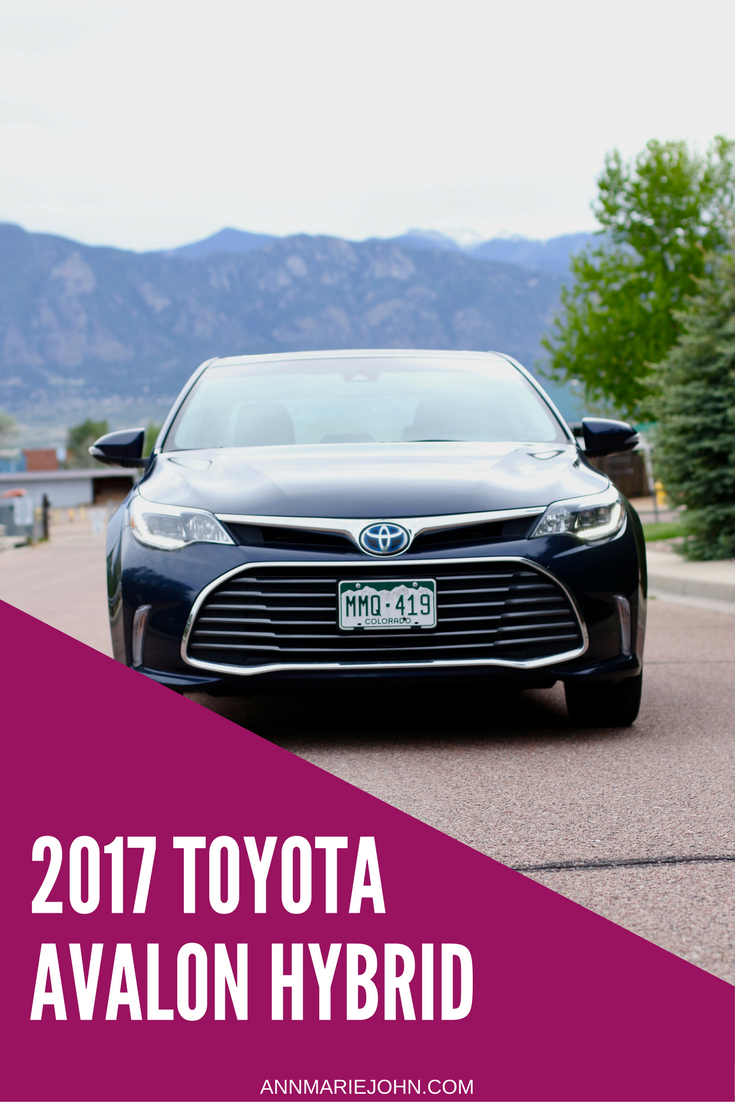 So what can you expect when you purchase a Toyota vehicle?

Pre-Collision determines whether the possibility of a frontal collision with a pedestrian is high under certain conditions, it prompts the driver to take evasive action and brake, by using an audio and visual alert, followed by Brake Assist.

When equipped and enabled, if the system determines that the vehicle is on a path to unintentionally depart from its lane, the system may provide small corrective steering inputs to the steering wheel for a short period of time to help the driver keep the vehicle in its lane.

When enabled, Automatic High Beams use an in-vehicle camera to help detect the headlights of oncoming vehicles and taillights of preceding vehicles, then automatically switch between high and low beams as appropriate to provide the most light possible and enhance forward visibility.

The 2017 Toyota Avalon Hybrid comes with all the bells and whistles that you’d expect in a high end luxury vehicle but without the high-end luxury price. I had my eyes set on an SUV, but after driving the Avalon I think I’ve found my next car, and I’m going to tell you why.

I was first truly amazed at what I saw when I first started the car. Not only does it have a VERY quiet start-up, but a full tank of gas would enable me to drive approximately 570 miles. Not many vehicles can boast those kinds of mileage. With the price of gas skyrocketing, I’d rather not have to pay an arm and a leg when I want to go anywhere.

So what were my favorite features?

The Toyota Avalon starts with a push of a button, so no need to hunt for those keys in the bottom of your bag. Once you’re within a few feet of your car, the interior lights automatically turns on and you can open the car with a touch of the door handle, as long as the smart key is on your person.

Once set to Auto, the Avalon’s wipers automatically senses and adjusts to the rain hitting your windshield so you’ll always have clear vision.

I can’t begin to tell you how many near misses I’ve had with my own vehicle, all because I couldn’t see the person in my blind spot. With the Toyota Avalon Hybrid, I never had that worry. It alerts you by showing a warning signal on your side mirror.

Going over the speed limit has always been a problem. Once you set your desired speed, the Dynamic Radar Cruise Control uses a front-grille-mounted, millimeter-wave radar and an in-vehicle camera to detect a preceding vehicle and help determine its distance. It keeps your speed while keeping you safe from collision.

The very easy-to-use touch controls are exactly just that. Very simple to use. The touch screen controls the audio, navigation, and even the climate in the vehicle. Speaking of climate, the 3-zone climate control allows those in the rear to control their own temperature. This feature, however, is only standard in the limited editions. The navigation was amazing! The navigation enables real-life traffic, so you can afford high traffic areas and even accidents.

Sometimes you can’t always see what’s behind you, so having a backup camera allowing you to back out with ease was perfect.

While I LOVE leather seats, I’m not a fan of leather seats in the summertime. While most vehicles come with heated seats for the winter, it’s great to see that Toyota thought of us wanting to have cool seats during the summer.

While those are by far my favorite features of the 2017 Toyota Avalon Hybrid, there are so many more, such as:

I suggest heading into your nearest Toyota dealer and taking it for a test drive yourself. With all the new safety features that Toyota has included in all their new vehicles, it might just be too difficult of a choice for you to make, but my heart is saying get the Toyota Avalon Hybrid. Let’s Go Places!