Who’s a My Little Pony fan? I know I am! That’s why I’m excited to tell you all about their new DVD that will be available very soon. 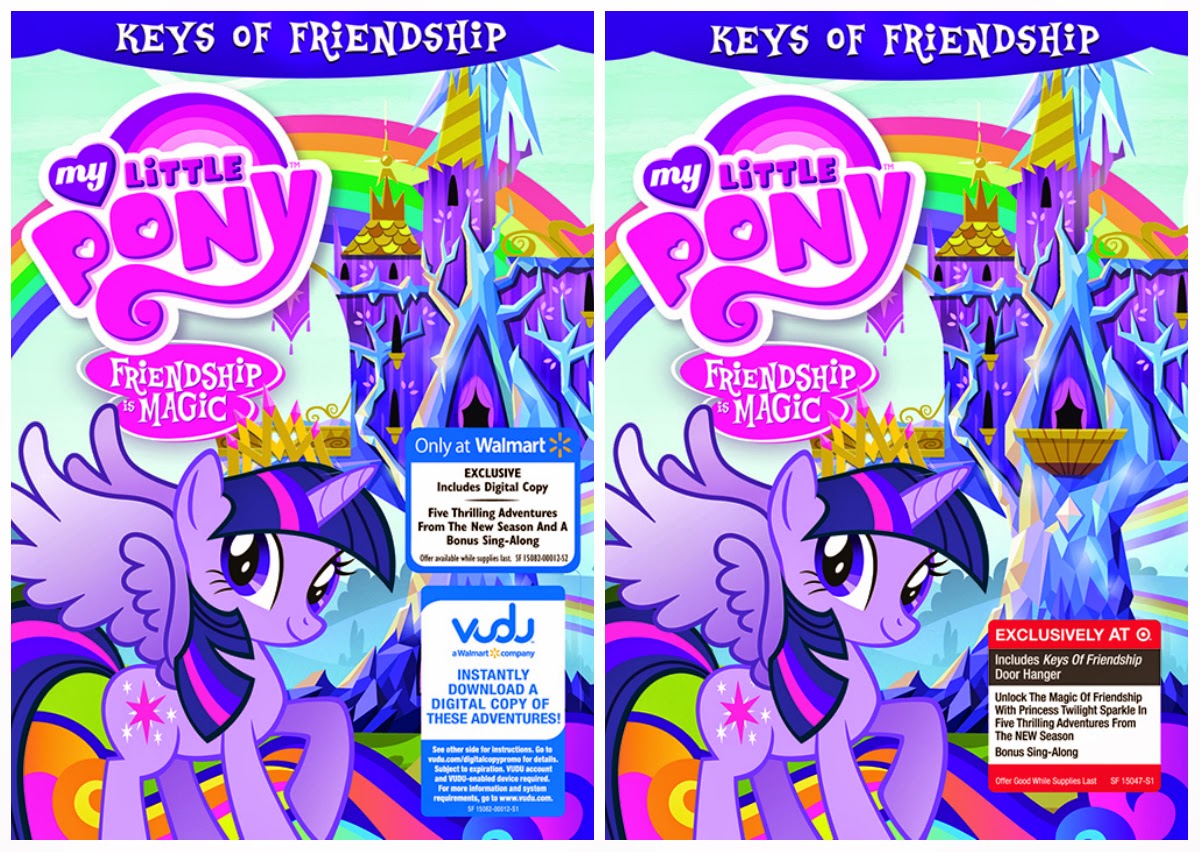 Ponies make the best friends! With that in mind, My Little Pony Friendship Is Magic: The Keys Of Friendship is coming to DVD on July 29 in the U.S. and Canada from Shout! Factory Kids in collaboration with Hasbro Studios.  The 5 episodes include “Rarity Takes Manhattan,” “Pinkie Apple Pie,” “It Ain’t Easy Being Breezies,” “Twilight’s Kingdom, Part 1,” and “Twilight’s Kingdom, Part 2.” A fun sing-along is included as a bonus feature.

Since her arrival in Ponyville, Twilight Sparkle has learned the true meaning and value of friendship. With her very best friends — Rainbow Dash, Rarity, Pinkie Pie, Applejack, Fluttershy and, of course, Spike — Twilight goes on the greatest of adventures and comes back with even more lessons. All of this has earned Twilight her wings and the crown of a Princess and now you can learn what Princess Twilight Sparkle has learned and take with you The Keys Of Friendship.

The My Little Pony: Friendship is Magic series is currently airing on The HUB TV Network in the U.S. and on Treehouse in Canada.

My Little Pony: Friendship Is Magic – A Dash Of Awesome

My Little Pony: Friendship Is Magic – A Pony For Every Season

My Little Pony: Friendship Is Magic – Adventures in the Crystal Empire

My Little Pony: Friendship Is Magic – Season One

To celebrate the 4th of July we have some fun Patriotic Pony Recipes just for you. Just click on the photo below and enjoy!

Hasbro Studios is the Los Angeles-based entertainment division of Hasbro, Inc. (NASDAQ: HAS). The studio is responsible for entertainment brand-driven storytelling for the company across television, film, commercial productions and short-form. It develops, produces and distributes TV shows based on Hasbro’s world class brands, including TRANSFORMERS, MY LITTLE PONY, LITTLEST PET SHOP and FAMILY GAME NIGHT. Many of these shows air on the Hub Network, a U.S. television network for kids and their families, that is a joint venture between Hasbro and Discovery Communications (NASDAQ: DISCA, DISCB, DISCK). Hasbro Studios shows can also be seen on networks in more than 180 territories globally.  Since its formation in 2009, the studio has received seven Daytime Emmy wins and 16 nominations.  On the film side, the studio is developing and producing a number of features based on Hasbro’s brands, including TRANSFORMERS: AGE OF EXTINCTION (Paramount), G.I. JOE 3 (Paramount) and CANDY LAND (Sony).  The studio team also oversees the production of commercials that feature Hasbro’s brands as well production of short-form content that can be seen on all of the major digital and social media platforms globally.