Planning on taking a trip to one of the most magical place in Europe but not sure where to stay? Let us help you with your Disneyland Paris Hotel decision. With creatively themed lodging options including a dazzling Manhattan-style hotel, a New England seaside resort of the 1900s and a colorful town from America’s Old West, the hotels of Disneyland Paris offer something for every taste and budget – from “value” to “deluxe”. 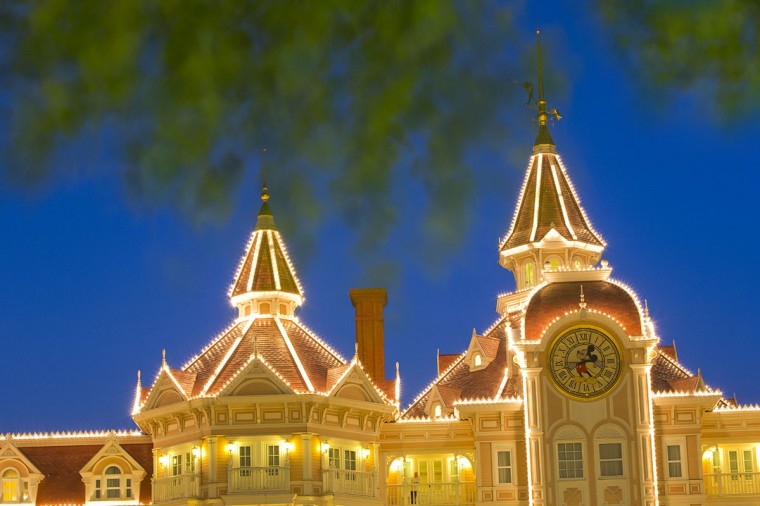 Each of the hotels at Disneyland Paris is themed to tell a story – of adventure, romance or elegance in another time and place. Each has its own distinctive architecture and design. And each offers comfort and convenience for guests of the Resort. There are six Disneyland Paris hotels plus the large Disney’s Davy Crockett Ranch wilderness retreat. The Victorian elegance of the luxury-class Disneyland Hotel, the relaxed woodland setting of the moderate Disney’s Sequoia Lodge and the American Southwest atmosphere of the value Disney’s Hotel Santa Fe, are just a few of the options. 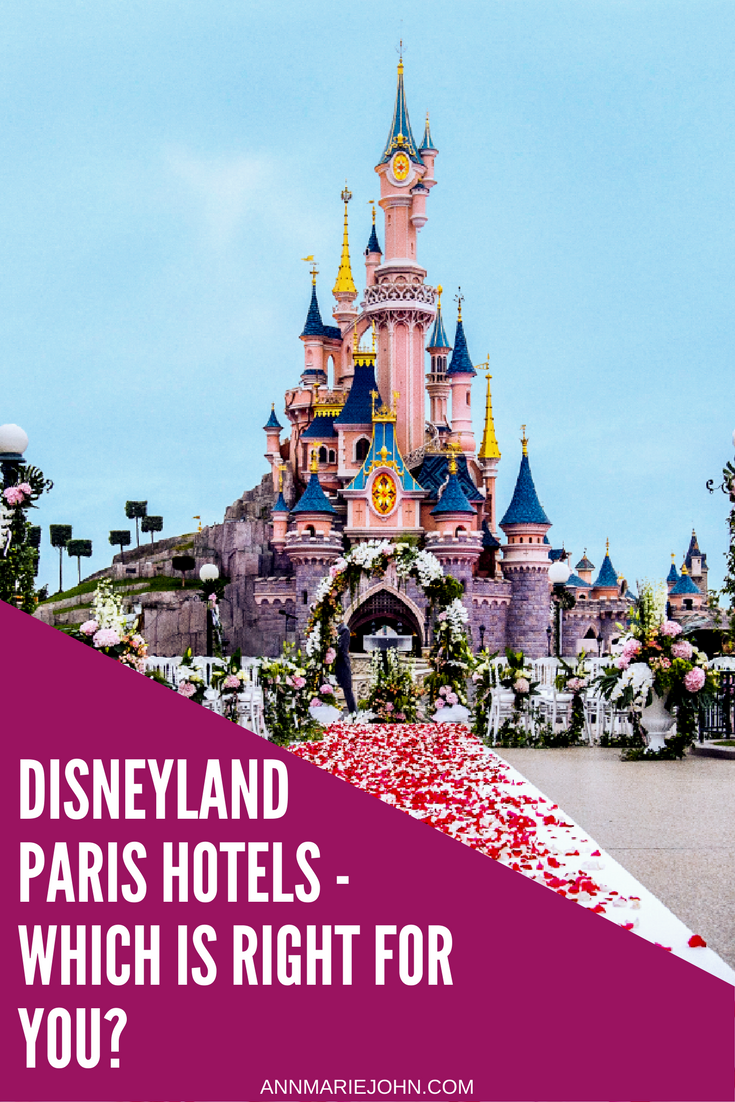 This majestic Victorian-inspired Hotel built over the entrance of Disneyland Park is the ultimate Disney hospitality experience, offering guests a return to the days of grand hotels and opulent lifestyles.

It includes 496 luxurious rooms including The Castle Club on two privatized floors with its 18 suites and 51 rooms (some rooms even offer a unique view of Sleeping Beauty Castle!). Amenities include an indoor swimming pool, whirlpool, a fitness room with sauna, and steam bath. The luxurious Disneyland Hotel also treats its guests with an elegant and state-of-the- art spa: The Celestia Spa offers hotel guests the ultimate choice in beauty treatments to enhance wellbeing, inner peace and happiness. The hotel has two restaurants: the buffet restaurant Inventions, and the award-winning California Grill table-service restaurant, serving Continental cuisine, both of which overlook Main Street, U.S.A. and a cocktail bar, Café Fantasia, with décor inspired by Fantasia (1940). The hotel also includes a boutique featuring Disneyland Paris merchandise plus luxury and collector’s items, a children’s play area, video and arcade games, free Wi-Fi internet connection, 24-hour room service and valet parking. Guests can also have dinner in the dazzling company of guest stars: the Disney Characters at Inventions and during the traditional Disneyland Hotel themed Sunday Brunches. 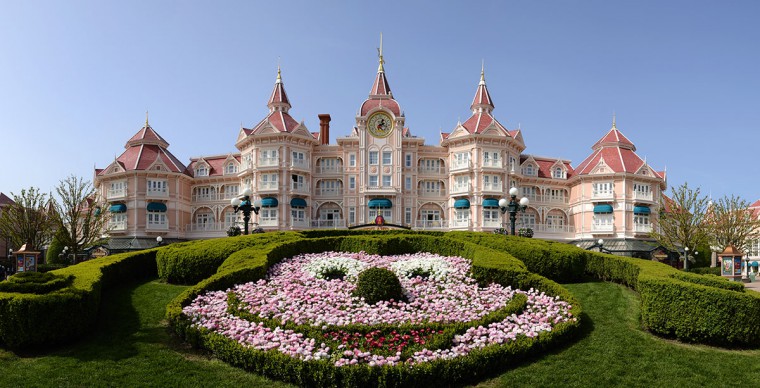 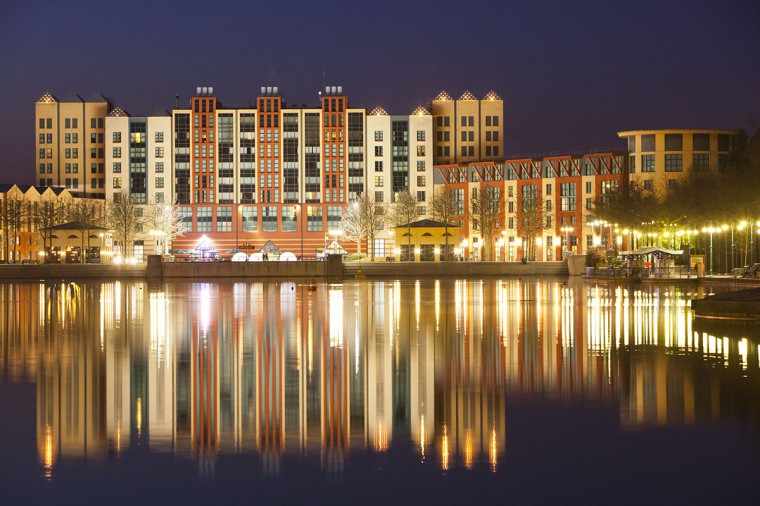 A tribute by architect Robert A.M. Stern to the relaxed, elegant seaside resorts in New England at the turn of the 20th century, Disney’s Newport Bay Club has the atmosphere of a sailing club, with a large veranda, slate roofs and brightly striped awnings. The lakefront hotel has 1,100-rooms including the Admiral’s Floor (comprising rooms and suites, offering accommodations with separate check-in, tea & coffee facilities, luggage service, concierge and room service). Amenities include indoor and outdoor swimming pools; a health club with sauna, whirlpool, exercise room and free Wi-Fi internet connection. The hotel has one themed bar, the Fisherman’s Wharf, and two restaurants: the Cape Cod Restaurant featuring an international buffet, and a table-service restaurant in the Yacht Club, styled as an elegant establishment. Disney’s Newport Bay Club also includes a 5,500-square-meter Convention Center offering spacious meeting rooms. 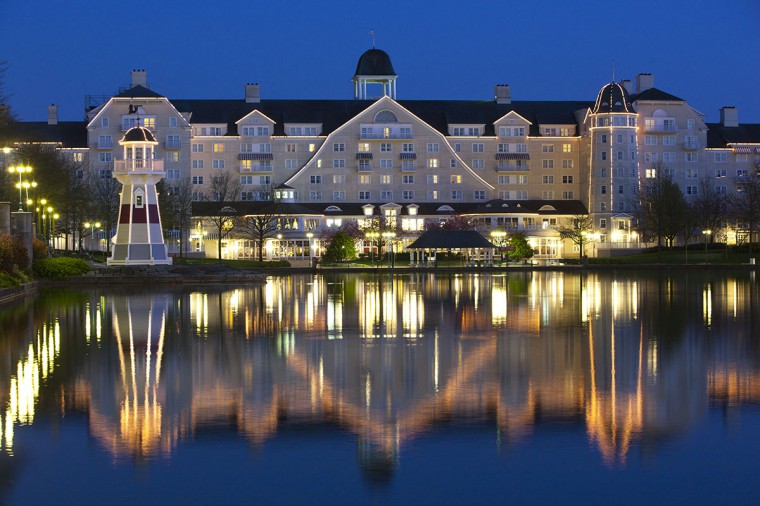 French architect Antoine Grumbach was inspired by the Arts and Crafts style lodges of American national parks for his design of Disney’s Sequoia Lodge featuring stone and wood accents, parquet floors and gigantic chimney. Surrounded by giant sequoias and other beautifully themed landscaping, the hotel has 1,011-rooms (some in independent buildings called Lodges) including the Golden Forest Club (comprising 124 rooms and suites in the main building, offering exclusive services such as a private and personalized reception, luggage service, private Lounge in the afternoon). Facilities include an indoor and outdoor swimming pool, whirlpool and a health club with sauna, free Wi-Fi internet connection, children corner and the Redwood Bar and Lounge surrounding a huge stone chimney. Dining is buffet style in Hunter’s Grill and in Beaver Creek Tavern. 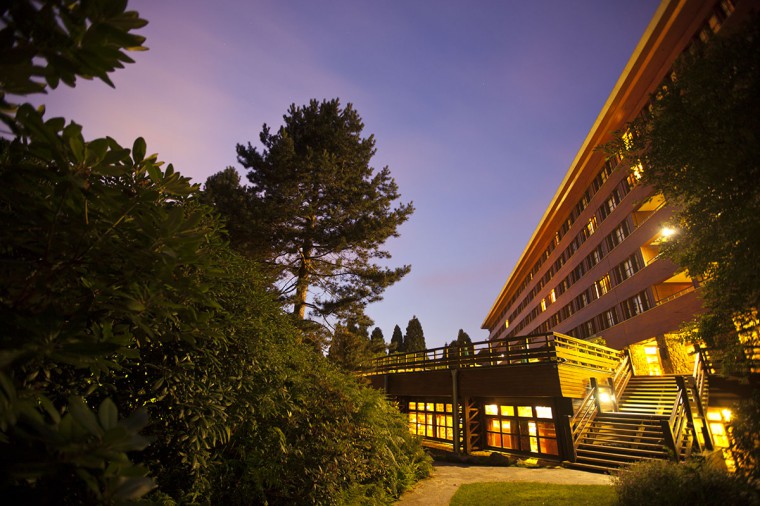 Imagine waking up in the Wild West, just like the setting of a Western movie!  The Hollywood image of the American cowboy inspired Robert A.M. Stern’s design for Disney’s Hotel Cheyenne. The hotel features streets lined with board sidewalks and two-storey wooden buildings named after famous Old West personalities (e.g. Calamity Jane, Wild Bill Hickok) and landmarks like the blacksmith’s shop, the boarding house and the laundry. The 1,000-room hotel is popular for families with children, offering many rooms with double bed and bunk beds. Amenities reflect the cowboy movie theme: there’s a children’s play area (seasonal) in a mini pioneer fort with lookout tower (no access), an Indian village, pony rides (seasonal), the Red Garter Saloon and the Chuck Wagon Cafe with western-style fare including “the best barbecue this side (the FAR side) of the Rio Grande.” Facilities also include free Wi-Fi internet connection (Lobby and Bar). 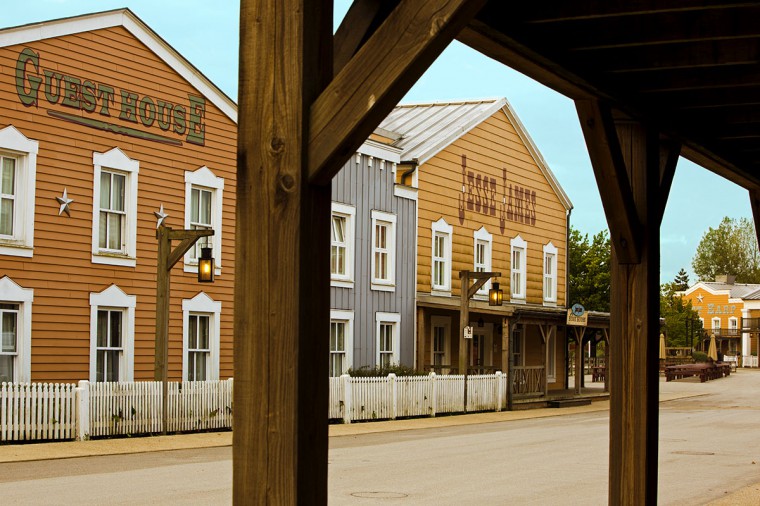 Architect Antoine Predock’s roots in his native New Mexico are clearly on display in his design for this desert-themed 1,000-room hotel which salutes the dawn of the “family drive” era in the mid-20th Century, when Americans were taking their automobiles on the road to discover their country. Disney’s Hotel Santa Fe resembles a stop in the American Southwest along Route 66, with adobe-style pueblos and, at the entrance, a drive-in theatre screen permanently displaying Lightning McQueen & Sally, heroes of Disney•Pixar film Cars. The hotel features the Pow-wow video games room, La Cantina, a restaurant with an all-you-can-eat buffet offering European and Mexican cuisine specialties and the Rio Grande Bar. Facilities also include free Wi-Fi internet connection (Lobby and Bar). 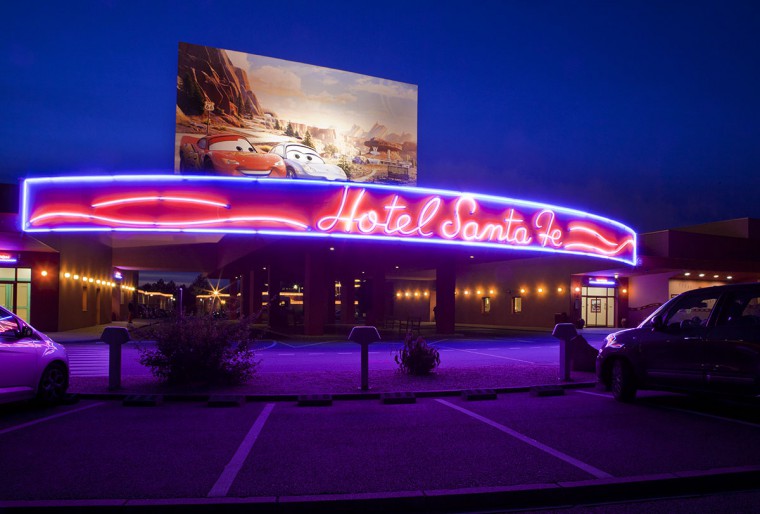 Nestled in 57 hectares of forest and designed like a frontier “trapper village”, Disney’s Davy Crockett Ranch is a self-drive destination. It is open to Disneyland Paris guests in search of relaxation in a wilderness retreat. Disney’s Davy Crockett Ranch features 595 equipped log cabins that accommodate up to six. Just 15 minutes drive from the Disney Parks and Disney Village, the retreat features a general store, a saloon and Crockett’s Tavern for family dining – or you can cook your own meals in your cabin or on the barbecue. An indoor swimming pool with a waterfall and slide, tennis make the Ranch an ideal family getaway. The Ranch also features Davy Crockett Adventure, an exploration trail featuring swings, trapezes, rope bridges and ladders. Guests have free access to Guest Parking at the Disney Parks. Facilities also include free Wi-Fi internet connection (Restaurant and Bar).

No matter which hotel you choose, you’ll still be at one of the most magical places in Europe. Have fun!