Dogs are a man’s best friend. They offer companionship, unconditional love, and plenty of cuddles. Although there isn’t any one breed of dog that is superior to the rest, there seem to be two communities of dog lovers; one group that prefers large breeds, and a second group that prefers small breeds. These two groups often overlap to a degree; after all, dog lovers usually just love dogs in general. But there are plenty of individuals who only like small dogs and individuals who only like big dogs.

There may be advantages to both small and large breed dogs. A lot of these advantages are similar, because dogs in general are just great. But – spoiler alert – I’m partial to the large breeds. And here are 5 reasons why: 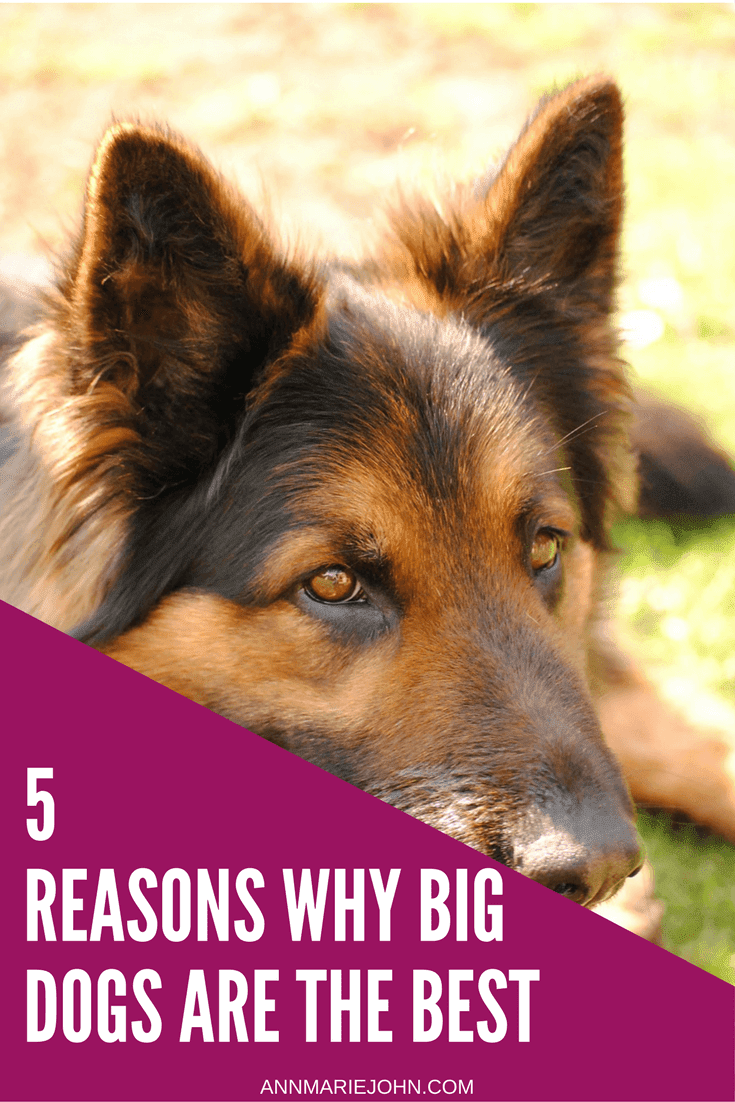 They’re great guard dogs. I’m not saying that you should get a large dog just to patrol your home, but large dogs are much more likely to frighten off an intruder than a small dog. If you see a German Shepherd heading towards you, you’re going to be more likely to run off than if a chihuahua starts yapping at your heels. So, if one of your reasons for getting a dog was for security and companionship, a large dog might suit your needs better.

Large dogs are also easier to train. This may be less of an issue with the dogs themselves, but with the owners. Small dogs tend to get less training than a large dog, because they can be held and easily “controlled.” This isn’t to say that little dogs can’t be trained, but it’s much more important for a large dog to understand and heed basic commands from the whole family. Once a large dog is sufficiently trained, it’s a great asset for your home. After all, most large dogs have been historically bred to work with humans, and to help get work done, or to guard and protect.

It would make sense that a large dog would be able to give more comfort than a smaller dog. Imagine having a long, hard day, and coming home to cuddle your dog. If you have a large Saint Bernard, you’ll be cuddling against something large and soft, like a loving pillow. Coming home to cuddle your Maltese is also enjoyable, but it lacks the feeling of being surrounded by comfort like cuddling a large dog gives you.

Out of the ten healthiest dog breeds (Australian Cattle Dog, Foxhound, German Shorthaired Pointer, Border Collie, Chihuahua, Havanese, Australian Shepherd, Poodle, Mixed breeds, and Siberian Husky) only two of the dogs on the list are small breed dogs, and the rest are large breed dogs. Although no dog is without health problems for the full duration of their life, having a dog with less health problems means less vet bills and less heartache. While this is largely in part due to the genetic makeup of the breed, it could also be because larger dogs are more willing to exercise and therefore live healthier lifestyles.

Speaking of healthy lifestyles, most of us forget that the mental health of your animal is important too. Small dogs are over twice as likely to suffer from anxiety, which can make things like moving or traveling out of town a nightmare.

Yes, a large dog is going to have a bark that’s much more substantial than a small dog. But they tend to bark less often and aren’t provoked as easily. In addition, they often calm down a lot quicker. If the postman knocks on your door, a large dog will often bark just a few times to announce their presence and then quiet down, if they even bark at all. Small dogs will bark and bark even after you’ve opened the door and the postman has left.

They’re less picky with their diets

Small dogs are more likely to refuse certain types of foods. And if you adopt your dog when they’re no longer a puppy, a small dog generally needs to stay on the same food that they were raised on, to keep their digestive system healthy. Big dogs are just happy to eat whatever you give to them, whether specialized dog food for large breeds or a simple homemade chicken and rice meal, their bodies can handle it. This means that a large dog is also a lot less likely to receive considerable harm if they eat something that’s toxic to dogs, such as chocolate.

If you’re a small-dog lover, I’m absolutely not opposed to hearing your rebuttal to the large-dog argument. Share the reasons you love your small dog below. And to the rest of you large-dog lovers, what’s your favorite thing about having a bigger animal around?