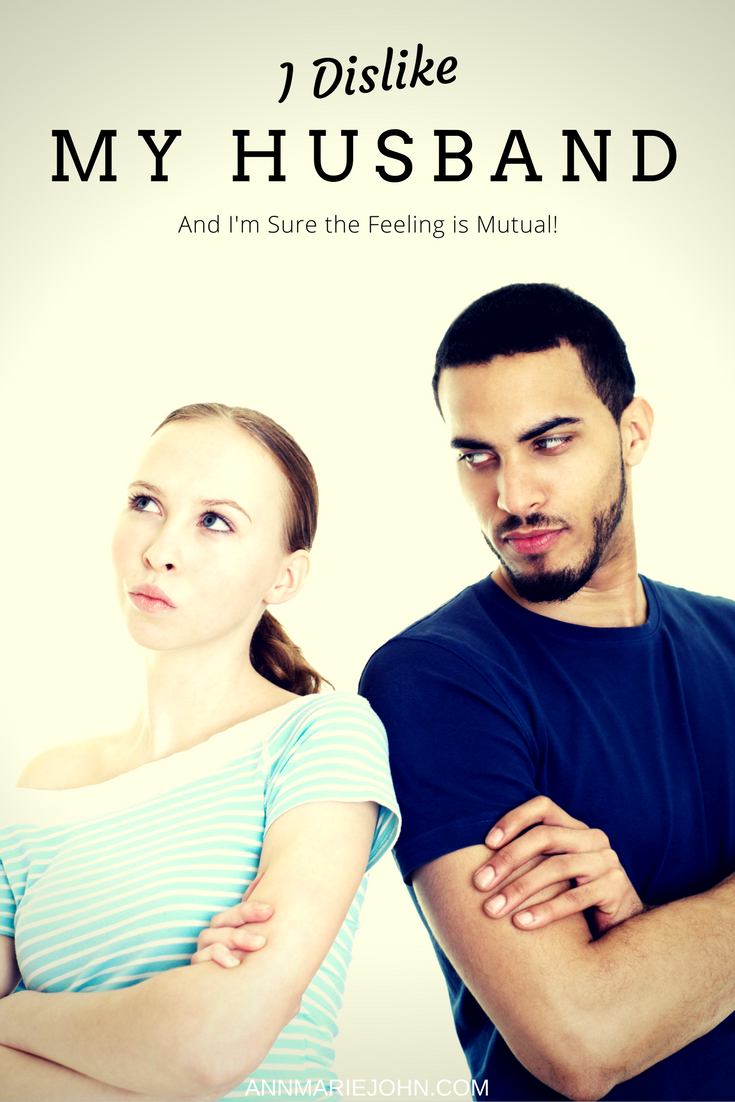 Everyone knows that I’m married, happily married – no, not entirely. Actually, that couldn’t be further from the truth. How about unhappily married! When I got married 11 years ago, who would have thought that the love that I felt for my husband would eventually turn to dislike, and I’m actually saying that nicely. I’m now unhappily married to someone I would much rather suffocate in their sleep than lay next to. And you may be wondering, how do you suddenly just start disliking someone after all those years? Can’t things be worked upon? I would have to say a resounding NO! And how do you know when you’re no longer in love? Well, let me tell you.

How do I dislike thee? Let me count the ways!

1. When your favorite station on TV is Investigation Discovery, and you stay glued to the television screen looking at every single case, memorizing and chastising the women for all the ways they did it wrong and thinking of how you could get away with it, whenever you look at your now insignificant other. However, while the urge is strong, I won’t kill him. Why? I would much prefer to live a free life than one in jail because no matter how good you think you are, there’s really no such thing as the perfect murder, so I guess he’s safe….for now.

2. You changed his name in your phone from Hubby to Jackass or some other creature. Yes, that love of your life is no longer the love but someone that you’d rather let your phone ring out to instead of answering.

3. You now go out on dates alone and would rather much be alone than in their company. You used to love going on dates together, and just hearing him ask you to go to the movies used to give you butterflies in the pits of your stomach. Now you’d much rather make up any excuse not to go to the movies or anywhere at all than go out with him because that butterfly feeling has now turned to disgust.

4. Your communication is now non-existent. Gone are the days when you could talk and laugh about everything. Now you talk to your friends online or in his case to his friends on Xbox Live rather than each other. You send the kids to ask questions instead of asking yourself because the sound of his voice annoys you. Your texts are now one-liners, and it’s like you’re having a conversation all by yourself. Or even worse, you don’t receive or give a response until many hours later or sometimes not at all.

5. You cross to the other side of the room or give them enough room to pass so that they don’t touch you. Yes, if you’d much rather your now insignificant other not ever touch you, it’s time to let go and move on.

6. You’ve stopped wearing your wedding rings. The one thing that symbolized your love and devotion to each other. You’ve kept it off for so long that the telltale line that showed up is now non-existent, and as a matter of fact, you have NO IDEA where your wedding ring is, and you really don’t care if you never see it again.

Now I’m not sarcastic, this is actually my life. These are things I do daily, and as my title states, I’m sure the feeling is mutual. I live with someone who shows no support for the things that I do. Someone who would much rather spend time with his friends than with me. Someone who finds time to do things WITH his “friends,” but when you ask him to do something with you, he’s busy, he doesn’t have the time, or he can’t take the time off. Someone who continually ignores me and makes me feel unwanted like I’m not good enough, but guess what?

I AM GOOD ENOUGH, AND I DESERVE BETTER!

I was taught by my mother never to let a relationship define you, and you might be saying, “well, what about marriage counseling?”. We’ve tried that, and he thought it was an absolute joke. I have to say that I’ve tried, I have tried to save my marriage, but enough is enough, and it’s now time for me to find myself once again. Now it’s time for me to be the person that I was meant to be.

Now I’m not a marriage counselor, and I would never tell anyone to leave their significant other. I’ve actually told girlfriends to try and work it out with their other half. I refuse to use the word “better” because I’m pretty sure that I’m more than better. However, if you’re in a relationship that is steadily going nowhere and you’ve tried your best, while the other person isn’t interested in even giving twenty percent, I say it’s time that you go out on your own. You can do it, and you can make it. Never let anyone tell you otherwise.